The West must back efforts to pursue reforms and fight corruption 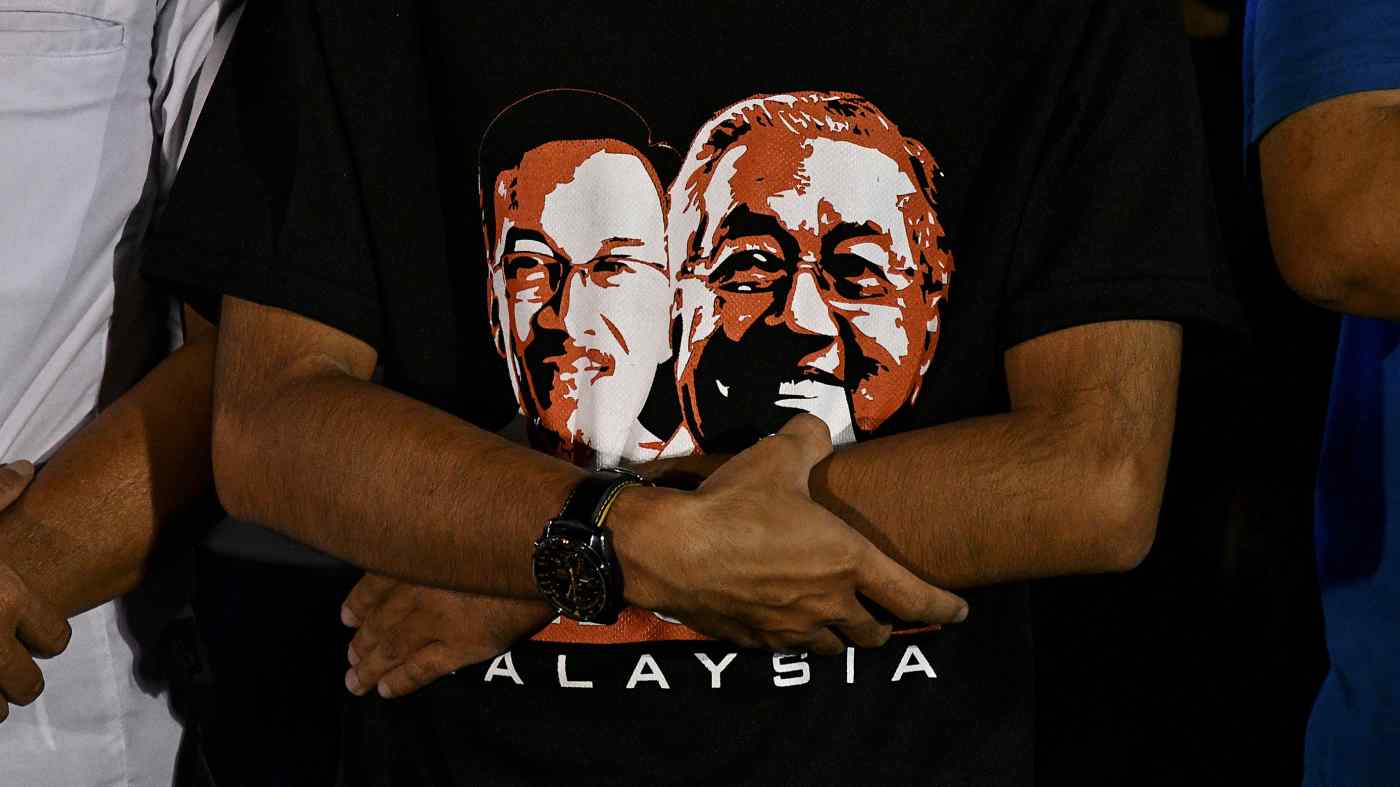 A supporter wears a t-shirt showing Anwar Ibrahim and Prime Minister Mahathir Mohamad at a rally in Kuala Lumpur on May 16.   © Reuters
CopyCopied

As the dust settles from the surprise victory of Malaysian opposition coalition Pakatan Harapan (PH) over the ruling Barisan Nasional (BN), the only question that matters is: What's next?

The initial positive steps taken by PH under the leadership of the 92-year-old Mahathir Mohamed inspired hopes of a renewal of Malaysian democracy, and of potential ripple effects across a region in the grip of democratic backsliding.

The previous ruling party manipulated political Islamism for electoral advantage, compounding risks posed by returning Malaysian extremists who fought with Islamic State in Syria and Iraq. More broadly, it is unclear whether a democratic transformation can be delivered by a prime minister who previously ruled Malaysia with an iron fist for 22 years.

Malaysia's future is in the hands of its leaders, but the country's friends abroad can help them steer a new course. This should include U.S. assistance investigating international financial links to corruption networks inside Malaysia as well as technical support for institutional reform targeting the gerrymandering and patronage networks that skewed democracy under the previous regime.

First, the good news. Malaysia's elections showed that the combination of a united opposition, a citizen-centered campaign platform, and a civically engaged electorate can drive a political reversal that even seasoned observers failed to predict. It demonstrated an enduring truth in politics: The status quo may appear unshakable, but nothing lasts forever. No single party has the right or ability to rule any country in perpetuity. The peaceful transition of power is a victory in itself.

Moreover, the new government has already made progress on critical campaign promises, including establishing a new task force to investigate the massive 1Malaysia Development Berhad corruption scandal. Pervasive corruption drove citizens' vote for change: polls showed corruption and economic mismanagement were top concerns across the electorate prior to Election Day. 1MDB had turned into a vehicle for foreign powers to financially influence Malaysia's ruling elites and a slush fund to underwrite BN dominance.

The new government must walk a fine line between seeing justice done and running a political witch hunt that damages its fragile coalition. It must also navigate concerns over foreign meddling. Mahathir has signaled that he will review all Chinese investment deals in Malaysia to ensure that loans have not placed an undue burden on the country -- a welcome sign the new government may take a more circumspect approach to forms of Chinese influence that undercut Malaysia's sovereignty.

Ultimately, these initial measures must be undergirded by structural improvements to the quality of Malaysian democracy. Reform imperatives include strengthening the independence and authority of core government institutions such as the Anti-Corruption Commission and the Election Commission. It is crucial that the new government empower parliamentary democracy by providing both sides of the aisle with the opportunity to introduce and debate legislation in order to address issues of greatest concern to citizens.

Reforms can only have weight if rule of law and separation of powers are properly restored so all institutions can execute their responsibilities without fear of retribution. Corruption investigations of former government officials should be conducted transparently and independently, above all the 1MDB case.

As part of this restoration of the rule of law, essential political rights such as freedom of expression must be bolstered through measures such as the repeal of the anti-fake news act, the printing presses and publications act, the sedition act, and other colonial-era laws previously used to silence critics of government policies. Civil society can play a critical role in advocacy and government oversight.

The West and Asia-Pacific allies including Japan and Australia should provide guidance on best practices in democratic governance, political party strengthening, and institutional reform so Malaysia can truly capitalize on this historic moment. America's Congress generously funds global democracy and governance assistance programs through the State Department and the Agency for International Development; a fraction of these resources could be redeployed to ensure that the first democratic political transition in modern Malaysia's history succeeds. This is all the more important given the strategic stakes in a region that otherwise risks falling under China's authoritarian influence.

Providing support and resources for new state administrations with limited governing experience is another next step in strengthening Malaysian democracy from the ground up. Democracy assistance organizations and international partners can play a role supporting the government in these capacity-building efforts.

Malaysia's new leaders must be on guard for the potential of interethnic and political tensions to erupt into conflict, undermining the country's democratic path. To build a stable government capable of delivering promised reforms, PH will have to overcome its long history of infighting, reject traditional personality-based politics, and bridge racial and religious divides within Malaysian society. This includes promoting values of pluralism to reinforce community cohesion; supporting initiatives that build trust between citizens of different backgrounds is one way of fostering these principles.

The new government must tackle the threat posed by Islamist extremist elements who have seized upon Malaysia's drift toward intolerance. Malaysia is being used as a logistical and financial hub by extremist groups, including the Islamic State, operating across Southeast Asia. The politicization of religion has created fertile ground for IS recruiters to actively target young Malaysians (the country's average age is 28) through social media and at local universities.

The reform agenda therefore must include countering IS propaganda and disinformation online while producing policies that directly address the concerns of young Malaysians disenchanted by economic disparity and political cronyism. This includes working with party youth wings to recruit young Malaysians into party activities and institutions so a new generation of activists has a voice in shaping their country's future.

In the short term, Malaysia's peaceful revolution is unlikely to lead to a dramatic domino effect of democratization across Southeast Asia. However, the peaceful transition of power after six decades of one-party rule reinforces a model of democracy that is indigenous and will redound in the wider neighborhood. The intensity of the Malaysian people's desire for change -- and their ability to bring it about despite the BN's use of every trick in the book to sustain itself in power -- sends a signal to corrupt autocrats throughout the region.

Whether or not Malaysia enjoys the fruits of reform will depend on leaders' commitment to undertake a wider democratic overhaul of its political culture. This applies above all to Mahathir himself. He was once a prominent proponent of the "Asian values" argument that held Asians were unsuited to democratic choice and accountability. He now has a chance to prove himself wrong -- and deliver his country and Asia a vital service.

Matthew Hays is resident program director for Malaysia at the International Republican Institute, where Daniel Twining is president. Based in Washington, D.C., IRI has worked in Malaysia and over 100 other countries to support democratic leaders, parties and institutions.