Decentralized movements can thwart government efforts to suppress them 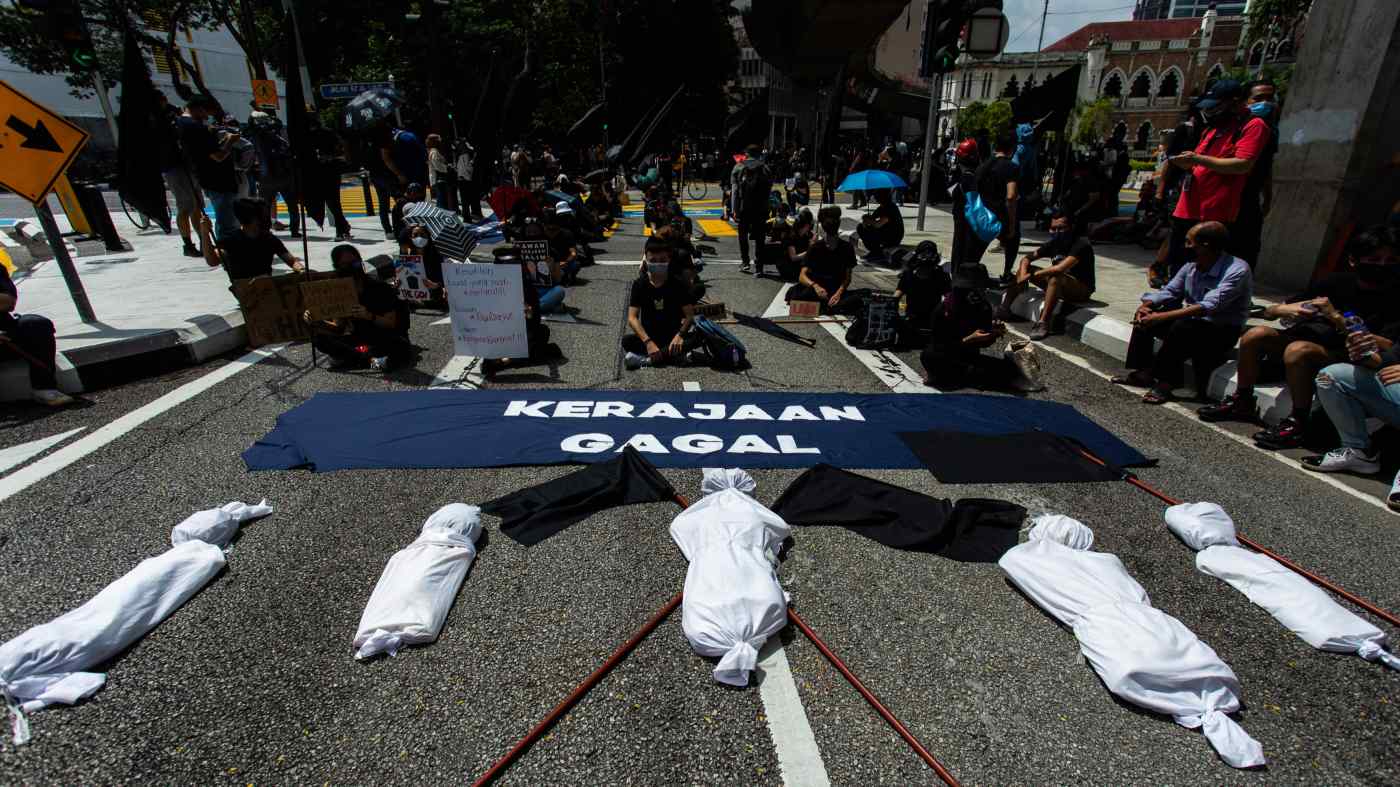 Benjamin Loh is a senior lecturer in the School of Media and Communication at Taylor's University Malaysia and an associate with the Asia Center in Bangkok.

Fresh turmoil in Malaysia triggered by the resignation of Prime Minister Muhyiddin Yassin on Aug. 16 has deepened public criticism of politicians' antics and fueled calls for reform of traditional backroom politics. More important, it has put the spotlight on the rise of leaderless protest movements that have the potential to change the dynamics of Malaysia's failed political system.

Muhyiddin's 17-month-old administration took power through political scheming and backroom parliamentary deals in the face of an unprecedented pandemic, which it handled poorly. Throughout its tenure, the government sought to curtail democratic processes to protect its beleaguered position and to exploit the COVID-19 crisis for political survival.

The prime minister's fall from power was ushered in by a series of challenges, including pressure from the opposition to reopen parliament -- kept closed to avoid a potentially fatal vote of confidence -- a public outcry over the mismanagement of the pandemic, and street demonstrations protesting government policies and seeking to hold ministers accountable.

Two serious challenges shook the government in July: a one-day strike for job security by pandemic-fatigued doctors on temporary contracts, and a demonstration in Kuala Lumpur by thousands of youths expressing frustration with the handling of COVID-19. Strikingly, both protests pursued leaderless strategies -- a shift from personality-based movements that could spark a political awakening.

The demonstration, dubbed Lawan, or Fight, was led by the People's Solidarity Secretariat, an umbrella organization for youth and grassroots groups. The demonstrators accused politicians of mishandling the pandemic because they were distracted by the political infighting that has engulfed Muhyiddin's shaky Perikatan Nasional (PN) coalition government.

Despite public criticism of both protests, the organizers took great pains to ensure public safety. The doctors' protest ensured that only noncritical doctors and those not working in COVID-19 wards would participate, while the Lawan organizers used stewards to maintain order.

The doctors' strike drew harsh public criticism. With many Malaysians unable to work because of pandemic lockdowns, doctors' demands for job guarantees were seen by some as self-interested. The Lawan organizers did not need to be anonymous because they were exercising their right to protest. Yet, by adopting a "leaderless" model, the doctors made it impossible for the government to identify leaders or dismiss thousands of protesters. Nevertheless, selected ringleaders were singled out by the police, and some faced unannounced visits and questioning at their homes.

As the doctors' protest illustrated, decentralizing leadership roles can prevent authorities from isolating and neutralizing core leaders in order to dismantle movements. Authorities can find ways to "create" leaders by identifying and targeting charismatic personalities in hopes that their movements will lose steam and disband.

Malaysian activism and politics are generally personality-driven. Until recently, most nongovernmental organizations were synonymous with a particular leader as their official representative. This association can be problematic if the actions of leaders tar the groups with unwanted associations. For example, the 2011 Bersih 2.0 movement for clean elections was determinedly nonpolitical, but former chairwoman Maria Chin Abdullah's decision to enter politics led to many other individuals and events associated with Bersih 2.0 being seen as political.

Of course, leaderless movements are not without internal leadership hierarchies. Structures are needed to ensure the dissemination of power and responsibilities that allow for strategic planning and organization. But the distribution of leadership roles ensures that such social movements are robust and resilient against state action aimed at easily-targeted individuals.

As protest movements begin to leverage the power of social media to both organize and build wider solidarity, governments will resort to stronger means to stop them. Malaysia has not used violence against street protests since 2012. But this could easily change. Meanwhile, indirect threats such as police intimidation are an effective way to quell dissent.

Leaderless movements are far from ideal in Malaysia and will need some years to be effective. But the adoption of this strategy reflects growing political maturity, and it is refreshing to see the rise of faceless social movements, even if they are not truly leaderless. Continuing political uncertainty has undermined public confidence in political leaders and shown that strong personalities are not enough to govern a country, especially in times of crisis.

Whatever government replaces the collapsed PN coalition will face the same issues that brought down Muhyiddin: seeking a way to overcome the COVID-19 pandemic and instituting reforms to ensure that democratic functions and processes cannot be undermined by clandestine scheming. The new government can be expected to try to thwart local activists, despite the adoption of more progressive structures.

But activists must persevere in pursuit of better governance. That objective can be assisted by the adoption of a decentralized power dynamic, reinforcing the idea that a strong collective is better than a strong leader. With care, protest movements with distributed forms of governance other than charismatic leadership will help Malaysians to recognize the power of the collective without the need for a single face.

Discussion is growing of the potential for a unity or minority government in Malaysia, which would be an ideal opportunity for political parties, including the relatively new youth-led Malaysian United Democratic Alliance, to consider adopting leaderless and less Machiavellian styles of politics to engage in more consensual and nonpartisan approaches.

In this way, they can maximize their appeal to Malaysia's frustrated voters and pave the way for a more progressive political approach that can overcome the stagnant and broken political system.