The economic benefits of the deal have significant potential.   © Reuters
CopyCopied

The surprise announcement that the United Arab Emirates and Israel will establish diplomatic ties and normalize relations is hugely significant for the Middle East.

The third Arab state to recognize Israel, following Jordan in 1994 and Egypt in 1979, the UAE's decision -- though it took longer than it should have -- shows that Israel is finally becoming accepted as a legitimate stakeholder in the Middle East and part of the regional furniture.

Formalizing a strategic realignment that has been underway in the Middle East for some time, the opening between the UAE and Israel suggests that the old organizing principle of the Middle East -- Arab antagonism toward Israel -- has finally crumbled. New fault-lines are emerging in its place, on which the interests of Israel and the Arab world largely converge.

Foremost among these interests is concern about Iran. Not just its nuclear ambitions and ballistic missile program, but Iran's destabilizing support for terrorist groups stretching from Yemen to Syria and Lebanon. Other pressing concerns include the threat posed by Islamist extremism to regional stability, whether in the form of ISIS or other insurgent groups, a shared suspicion of regional actors such as Turkey, and anxiety about U.S. staying power in the region.

The fact that it has been the UAE -- the most moderate and progressive of the Gulf states -- that has taken this step forward should come as no surprise. Other Gulf states will likely follow its lead. The economic benefits of the deal have significant potential. Building ties between the Middle East's two most economically dynamic countries will provide big commercial and trade opportunities.

Direct flights and access between Israel and the UAE will link Israel's technological prowess with the financial, logistics and investment hub of the region. That's a win for both sides. Outside investors will be looking at what new commercial opportunities flow from the deal.

Then there is the strategic windfall for the region. Open diplomatic relations and exchanges between Israel and the UAE, and onward to the rest of the Gulf, will improve communication and allow increased coordination on security issues. The UAE-Israel channel will provide a vehicle to exchange assessments, coordinate positions, and if necessary address misunderstandings and de-escalate tensions, a vital piece of security infrastructure in a volatile region.

Given the UAE's close trade, commercial and diplomatic ties with Iran, this move will undoubtedly unsettle Tehran. It will add to Iran's isolation from the region and compound its economic woes. Notwithstanding Palestinian condemnation of the deal, it should be welcomed by those who support a two-state solution to the Israeli-Palestinian conflict 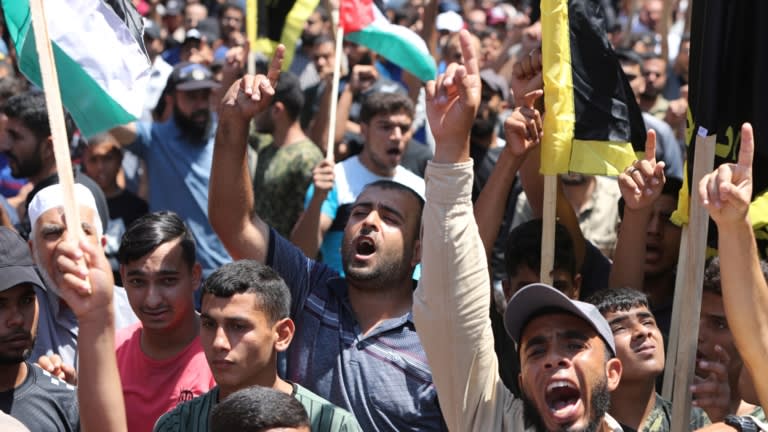 Palestinians take part in a protest in Gaza City on Aug. 14: the deal should be welcomed by those who support a two-state solution to the Israeli-Palestinian conflict   © Reuters

As part of the agreement, the UAE insisted that Israel take off the table the option of unilateral annexation of the West Bank. Had Israel carried that out that threat, it would have rendered a future Palestinian state unviable, and dealt a mortal blow to the two-state solution.

Beyond this, though, diplomatic recognition from the Arab world is a prized strategic asset for Israel. Only an Israel that feels secure and confident of its place in the region -- and that no longer faces existential threats -- will be able to make the difficult territorial, security, and political compromises necessary to create a Palestinian state.

The turmoil which characterizes the Middle East today is not unlike that which gripped Southeast Asia in the 1960s. In 1965, with the Cold War at its height, a major geopolitical fault-line ran through Southeast Asia. The Vietnam War, already raging for several years, was escalating and embroiling its neighbors. The non-communist countries of Southeast Asia faced serious internal threats from communist insurgencies, supported by a revolutionary government in China.

Trust between these non-communist states was low. Singapore had just been expelled from the Malaysian federation. Indonesia was pursuing a policy of konfrontasi against Malaysia. Brunei had put down an internal rebellion backed by Indonesia. There were irredentist pressures on the borders between Malaysia and Thailand, and the Philippines and Indonesia.

But it was such unpropitious circumstances that led to the creation of the Association of Southeast Asian Nations. A case of putting aside smaller differences to focus on the larger picture. As Singapore's elder statesman Lee Kuan Yew described it, "ASEAN was formed so that the non-communist states in Southeast Asia could contain and manage their differences to meet the greater threat from the communists."

The normalization between Israel and the UAE reflects a similar pragmatism -- the shelving of smaller differences to focus on the bigger picture. It marks an end to the zero-sum mindset that has held back the Middle East for decades, and made it such a time-consuming but unrewarding theater for outside engagement.

Outside investors should be looking at the region with a new interest. ASEAN's formation marked a turning point in the fortunes of Southeast Asia. We should hope the UAE-Israel deal will do the same for the Middle East.