Prerna Sharma Singh is an award-winning analyst specializing in policy and regulation with special reference to the agriculture and food sectors. She is a director on the board of Indonomics Consulting Private Limited.

Adamant that he would never give in to populist pressure, Indian Prime Minister Narendra Modi announced Friday with typical shock and awe fanfare the rollback of reform measures aimed at transforming the country's agricultural sector that contributes around 15% to India's economy but employs 45% of its workforce.

The surprise move to withdraw three contentious farm bills passed by parliament last September is a retrograde step that could slowdown future economic reforms. For now, the government must ask itself why it backtracked on a crucial reform that should have been an easy sell to voters.

Not the first time Modi has caved into strong public opposition. He withdrew controversial land acquisition laws in 2015 intended to encourage private investment. The latest policy reversal further undermines his well-crafted strongman image raises doubts over his ability to deliver on tougher reforms.

The aim of the ambitious reforms of the country's agricultural sector unveiled last year was to make it easier for corporations to buy farm produce directly from farmers, bypassing the traditional market yards and exploitative middlemen who have dominated for long.

The legislation also cleared the way for contract farming and eased stock holding limits on bulk traders that have hampered the development of futures markets, and which make India an unreliable exporter of farm produce.

That led to mass protests from farmers in Punjab, Haryana and other Indian states who feared that allowing the sale and purchase of farm produce outside the government-regulated markets, known as Agriculture Produce Marketing Committees, or APMCs, would result in price rises and increased market risk.

Other key stakeholders to oppose the reforms include the aforementioned intermediary brokers, and the states. While the brokers feared losing commissions, state governments, especially Punjab, were anxious about tax revenue losses on top of already reduced revenues following the introduction of a national goods and services tax in 2017.

Still, despite prolonged agitation and the deaths of 700 protesters, Modi stood firm with his supporters claiming the reforms, popularly known as farm bills, encompassed game-changing reforms that would unshackle Indian agriculture and put it on a more productive growth trajectory without the need for frequent government intervention.

Modi has said that he "failed to persuade a section of the farmers to accept" the farm bills and that his government had no choice but to withdraw them. Others claim that the reversal shows the government is listening. 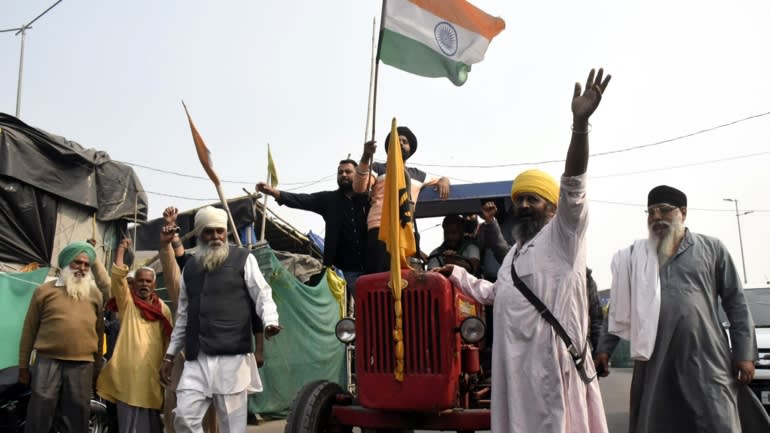 Critics, on the other hand, argue that Modi miscalculated, believing that opponents of the bills were mainly rich farmers and long-standing opponents of the government, and was caught by surprise when urban voters and the educated middle class came down against the laws.

While the ruling Bharatiya Janata Party believes that a grand coalition of anti-Modi forces has joined hands to exploit opposition to the farm bills and sideline the government, they are trying to project it as something that is intended to benefit large corporations and not farmers who should be the real beneficiaries.

What likely decided the fate of the bills was the crude electoral math of India's most populous state Uttar Pradesh -- it sends as many as 80 MPs to the lower house of parliament -- that often decides who gets to rule the country, with the results of recent local elections there suggesting the BJP would struggle in the upcoming state assembly elections.

With a sizable core of BJP supporters, and more vocal middle-class voters now solidly opposed to the farm bills, losing Uttar Pradesh would have done irreparable damage to the BJP's image as an invincible political movement, especially after the humiliating electoral defeat in West Bengal.

Elections in a democratic federation of India's size and nature are all about numbers and perception. By sticking with the farm bills, the BJP was losing ground on both fronts. At a time ruling party's popularity has taken a hit due to the perceived poor handling of COVID and the economy, Modi and BJP decided to cut their losses.

Whatever the politics and political economy behind the decision, the rollback is a big missed opportunity that reveals Modi's weakness when it comes to delivering on tougher second-generation reforms. This is something the business community, including foreign investors, should factor into their decisions regarding India's future direction.

Worse, it will encourage vested interests opposed to any future reform that if it puts up a big enough fight, it can stall any tough reform. Thus, the Modi government's decision to withdraw the farm bills is a big disappointment.

For Modi, an important take-away is that his autocratic style of functioning without any serious consultation and/or taking major stakeholders on board, could derail even the most sensible reform that should have been easy to sell to voters.