Money in the bank provides hope for India's beleaguered economy

The logo of the Reserve Bank of India on a smartphone: the RBI can afford to let real interest rates come down.   © Sipa/AP
CopyCopied

Members of the Confederation of Indian Industries attending a recent virtual meeting voiced rare and unexpected optimism regarding their country's economic prospects. Indeed, three-quarters of corporate attendees said they expected to invest this fiscal year.

That upbeat note is somewhat counterintuitive in a country that has seen well over 12 million COVID-19 cases, that went into the pandemic in March of last year with an ailing economy, and even today, has ample excess capacity in the system. So how to account for the change in mood?

In fact, the positive sentiment owes much to what one analyst calls a silent revolution. For the first time in almost a decade, India's central bank has a substantial cushion of foreign exchange reserves of close to $600 billion.

The second-round effects of that handy war chest could make a huge difference to the country's lagging fortunes. India can now afford to lower the cost of capital for its credit-starved companies and generate investment that could finally lead to far more jobs and income for its young people.

High interest rates have long been a drag on growth. Yet, for almost a decade, the Reserve Bank of India has had to keep interest rates high to prevent the rupee from depreciating too drastically and raising the cost of imports of everything from cellphone components to gold to oil.

Today, thanks to the magnitude of that foreign exchange buffer, India is better positioned to withstand the contagion that makes other emerging markets vulnerable. The timing is particularly fortunate since both U.S. interest rates and the dollar are rising, the usual backdrop to a slide in emerging market fortunes.

What has long put Indian corporates at a competitive disadvantage to rivals in other countries has been the prohibitive cost of capital that has discouraged private sector investment. The bar was simply too high. While credit growth in most of emerging Asia swelled at a rate faster than gross domestic product, the opposite has been true in India, seemingly forever.

Credit to GDP still stands at around 60% -- and is unlikely to exceed growth for another decade, according to some forecasts. The difference now is that the RBI can afford to let real interest rates come down, which could help trigger a new investment cycle leading to more rapid economic growth, with some estimates running as high as 13% for fiscal 2022, although that is by comparison to dismally low base numbers.

This potentially virtuous circle comes at a moment when India could use some good news. Two months ago, India was celebrating the signs that it was nearing critical levels of immunity as COVID cases dropped to a level of about 11,000 a day, from a peak of around 90,000 cases.

Then came the second wave of infections in March that saw daily cases increase almost more than tenfold from the lows. Worryingly, the economic scarring has been particularly severe in a country that can ill afford it. "India will be a lower-income country for longer as a result of COVID," said Priyanka Kishore, head of India and Southeast Asia economics for Oxford Economics in Singapore.

India was always going to be more vulnerable to the virus because of its relatively high dependence on services relative to manufacturing. The unemployment rate in December was just under 14%, compared to almost half that -- officially, anyhow -- pre-COVID. The drop in labor force participation, already too low, dropped further, as did the increase in joblessness. There are now 16 million fewer employed people, according to Observatory Group. 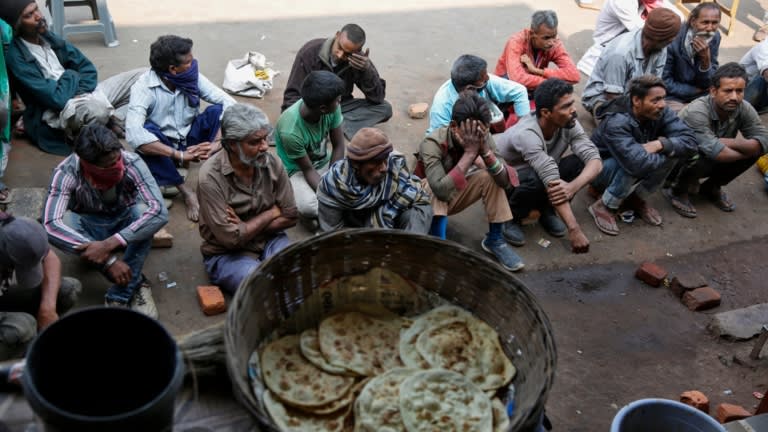 People wait for free food in Ahmedabad on Jan. 20: there are 16 million fewer employed people.   © AP

"We have always struggled with jobs," said Rajiv Lall, former chief executive of IDFC Bank in Mumbai and now with the Singapore Management University. "Job creation has overwhelmingly been in the informal sector. That means income inequality is a huge challenge."

To be sure, for credit to start flowing in a more robust fashion, lower rates are an inducement -- but probably not a sufficient one. That is especially true for the state-owned banks that account for the majority of credit in the system.

Banks are still repairing their balance sheets from the last cycle," said one consultant in Mumbai. "They aren't opening their wallets yet. They learned too late that their borrowers had too little skin in the game."

Meanwhile, the nonbanks have yet to recover from the shock and contagion they suffered when Infrastructure Leasing & Financial Services imploded in the fall of 2018, despite its high rating.

The best hope, then, for a new capital expenditure cycle is to inject more life in the domestic debt capital market, which remains illiquid and expensive, hamstrung by official fears of volatility and the victim of complicated tax and legal regimes. Authorities have to learn to let go in a timely manner. All too often, they have failed to do so in the past.