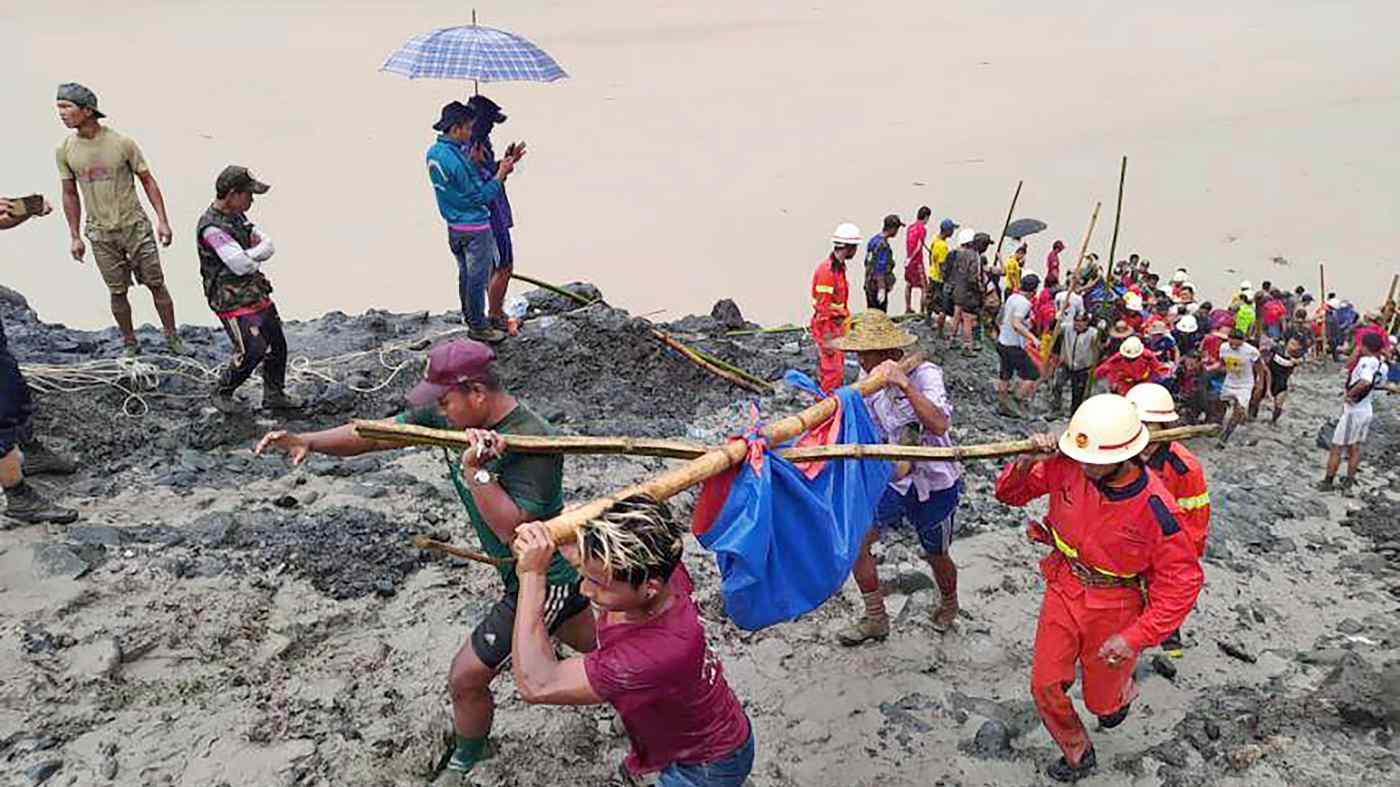 When the mountain of mining waste collapsed into a lake formed by monsoon rains, the miners had no time to run. Within seconds the lake burst its banks and a massive flood swept at least 174 people to their deaths.

The disaster at a jade mine in Hpakant, in Kachin State in northern Myanmar, at the start of July looks set to be the deadliest of its kind on record. Unfortunately, though, it is not a one-off, with similar deadly landslides occurring every year. As with all of these jade landslides, last week's devastating tragedy was likely avoidable.

For too long, the deaths of miners in Hpakant have been dismissed as the collateral damage of a lucrative jade industry, which is estimated to have been worth up to $31 billion, or nearly half of Myanmar's gross domestic product, in 2014. In the wake of the latest catastrophe, politicians have been quick to shuffle blame on to the informal yemase miners who were scavenging through mining waste despite a warning about heavy rainfall.

Myanmar's de facto leader, Aung San Suu Kyi, suggested that joblessness was to blame for the tragedy while the head of a government committee investigating the accident took aim at "greedy" miners who had ignored official advice.

This victim-blaming is not only outrageous but also diverts attention from the government's failure to clean up the sector. For years, Global Witness has called for better regulation of the corrupt, conflict-riven industry whose multibillion dollar revenues are siphoned off by powerful military-linked companies, cronies and armed groups to supply the largely Chinese market. A leading expert on Myanmar recently called it "a massive organized crime operation."

Despite promising to tackle the harms associated with the jade sector back in 2016, the National League for Democracy, or NLD, government has made slow and inadequate progress. A flawed new gemstone law, enacted in January 2019, has yet to be implemented, and an environmental management plan commissioned by the government sits on a shelf gathering dust.

Sources within Myanmar suggest powerful mining interests have pushed back strenuously against some of the strongest reform proposals.

This month's accident involved a mining plot that, according to an NLD representative, was prone to landslides after 10 years of mining by companies including Myanmar Takaung, which a 2015 Global Witness report found was a powerful entity with links to U.S.-sanctioned drug lord Wei Hsueh Kang and the country's most powerful ethnic armed group, the United Wa State Army. Many ethnic armed groups secured their jade mining concessions in exchange for cease-fire deals reached with the military in the early 1990s. Instead of bringing peace, these deals only fueled conflict as the armed groups divided the spoils, creating lawless, rent-seeking behaviors and ethnic tensions in northern Myanmar. Such companies with powerful connections have for years been allowed to operate with impunity in Hpakant, despite being linked to past landslides.

In fact, a similar landslide claiming over 50 lives last year involved a number of well-connected companies mining together as a part of an informal consortium, including military- and militia-linked businesses. Instead of taking on these powerful interests by investigating and punishing the companies responsible, the government regulator publicly defended their operations.

The Myanmar government has repeatedly shown itself either unable or unwilling to tackle the formidable business interests of military-connected entities and armed groups in the jade sector. While the government announced an investigation into the latest incident and the army has taken action against two military officers, Myanmar is not addressing the complex financial incentives that fuel the conflict as part of the country's struggling peace process. A trader looks at jade stones at an emporium hall in Naypyitaw in December 2011.   © Reuters

The NLD has made little effort to table dialogue on the underlying political and economic grievances of these conflicts, including large-scale resource grabs by the military. As a result, jade companies and armed organizations have continued to gamble with lives in the name of profit, worsening conflict dynamics at the same time.

In this context, last week's landslide should be seen not as an unfortunate accident but as a predictable and preventable calamity that should shame the government into action.

There are a number of practical, immediate steps the government should take. First, it should conduct an independent investigation into the cause of the disaster. Second, the government should adopt effective new gemstone regulations, including a ban on destructive large-scale mining and ensuring irresponsible companies have their licenses revoked. Finally, it should legislate to push military and armed groups out of the extractive sector.

Longer term, Myanmar's centralized constitution must be reformed to ensure that Myanmar's jade wealth is developed responsibly and for the benefit of the local population, who are once again left mourning loved ones and wondering when the next disaster will strike.