Supporters of National Unity Government march on a street in Yangon on Apr. 17: the NUG could form a stronger alliance by building trust with potential partners.   © AP
CopyCopied

Ardeth Thawnghmung is chair of the Department of Political Science at University of Massachusetts Lowell.

Six months since the Feb. 1 takeover, Myanmar's military has gradually regained control over the country's core areas by relying on brutal repression. But it is clear that the military has been unable to take control of daily operations of the economy and society.

Clashes between the junta's security forces and resistance groups, restrictions on internet access and population movements, withdrawal of foreign assistance and investment, and a successful civil disobedience movement have resulted in rising unemployment, increased poverty and the near-collapse of the banking industry while hampering efforts to cope with a third COVID wave.

This worsening humanitarian crisis has been exacerbated by power struggles between pro-military regime and anti-military regime movements that will determine Myanmar's future political direction. A broader and stronger coalition of anti-military regime forces is urgently needed to press the military to make urgent changes to ease the hardships afflicting most of society.

The military takeover has led to newfound recognition among the majority Burman population of the suffering that minorities have faced at the hands of the military over decades of armed conflict, and a related reassessment of the root causes of the military's entrenched hold on the country's political life.

But disagreements within the anti-military regime movement on the leading role of the National League for Democracy, which won another landslide electoral victory in November 2020, have undermined the unity of the coalition and amplified the military's divide-and-rule tactics.

For the ethnic minorities, which make up nearly a third of the population and have historically been marginalized by the Burman-dominated government and military, political autonomy and minority rights are more important than democracy, which was the top priority of Aung San Suu Kyi's NLD government.

Myanmar's myriad ethnic minorities are themselves fragmented with at least 100 of political parties and armed groups that vary in age, size, legitimacy and objectives. Some ethnic armed groups aspire to create a federal Myanmar, but many smaller ones are mainly concerned with narrow economic and political interests. 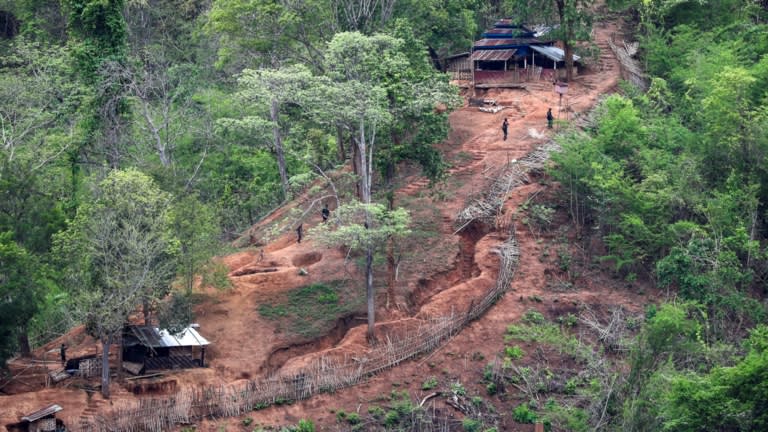 The heavy-handed practices toward minority groups pursued by the NLD leaders, both in government and in the immediate post-military takeover period, have undermined trust between them. Some ethnic organizations have sided with the military or remained quiet, while others are fighting against the army. Many minorities view the military takeover as a result of a power struggle between competing Burman groups.

Participants in the anti-military regime coalition also disagree over the role of minorities, including issues relating to the Rohingya Muslims, as well as the desirable level of political centralization and how resistance groups that have emerged since February, known as people's defense forces, should be managed. Tensions among ethnic minorities also add another layer to the challenges facing the anti-military regime movement

Nevertheless, the opposition to the junta has more advantages than in 1988, the last time there was a massive protest movement against a military government. These include digital technology, which has enabled much more interaction within the protest movement and with the outside world; vibrant and well-connected civil society organizations; multiple funding sources; the success of the civil disobedience movement; the growth of the people's defense forces; and global support from the Myanmar diaspora.

The current anti-military regime coalition also has strong connections and relationships with resistance movements inside the country, unlike the previous exile movement in the post-1988 period, which focused more on establishing relationships with foreign countries.

Two strategies against the military have emerged. The first is to unify under the leadership of the NLD-dominated National Unity Government (NUG) -- a shadow government formed by elected NLD politicians and some civil society leaders -- and deal later with controversial issues such as the role of minorities.

This approach is popular among NLD leaders and hard-core supporters, but enthusiasm among other groups has weakened as minorities have become disillusioned with the NUG's practices, which some minorities regard as Burman-centered and noninclusive.

The second approach, advocated mainly by the non-NLD elements of the anti-military regime movement, is to fight the military while simultaneously strengthening democratic processes and promoting inclusiveness in such anti-military regime bodies as the People's Assembly and National Unity Consultative Council (NUCC).

This is based on a collective leadership model exercised by a grand coalition of lawmakers, ethnic armed groups, political parties, civil society organizations, student groups, unions and strike committees that are intended to serve as a consultative body and provide a check on the NUG.

The second model attempts to address the fundamental causes of Myanmar's entrenched military establishment and the authoritarian centralization that continued under the NLD government. It seeks to create a space for genuine democratic processes and national reconciliation. It imagines a society beyond the leadership of Aung San Suu Kyi, who controlled NLD decision-making, by focusing on collective leadership and binding the NUG to guidelines set by the NUCC.

This approach may delay victory over the junta, but it is the only way to address Myanmar's deep-seated problems. Progress on key issues, unthinkable during the NLD period, has been made since the military takeover. This includes the NUG's abolition of the military-dictated 2008 constitution, establishment of a federal structure and removal of ethnic armed groups from the official terrorist list. The NUG is also more inclusive than the deposed NLD government and more willing to discuss the Rohingya issue.

The NUG could form a stronger anti-military regime alliance by building trust with current or potential partners. This includes incorporating feedback from minority groups, inviting smaller minorities to join the coalition and treating nonelected and non-NLD members as equal partners rather than subordinates.

The People's Assembly and NUCC could transform the NUG's role by providing health and education services on the ground in partnership with the ethnic armed groups.

This would raise public awareness that a genuine democratic process requires more than an elected government. It must include tolerance for diversity by acknowledging and addressing the views and concerns of all stakeholders -- particularly Myanmar's numerous minorities.