Myanmar's business community must speak out

Organizations need to take a strong stand against intimidation and violence Protesters hold banners during a protest against coup in Yangon on Feb. 16: one voice has been largely absent.   © Getty Images
CopyCopied

Jared Bissinger is a development economist and consultant who has focused on private sector development in Myanmar for the past decade.

Amid escalating intimidation and violence, Myanmar's people have continued to challenge the Feb. 1 military-led coup through protests and civil disobedience. Civil society, ethnic organizations, trade unions and many other groups are supporting the country's people as they protest, as are governments around the world. Yet, one voice has been largely absent through this crisis: the voice of Myanmar's business community.

For both principled and practical reasons, businesses need to take an active role -- through industry organizations -- in calling for the military and police to refrain from violence, intimidation and covert sponsorship of chaos. Myanmar's private sector is now a major economic force, having grown and diversified significantly over the last decade. It is one of the few influential actors with any hope of de-escalating the current crisis.

Myanmar's coup comes on the heels of the most robust decade of economic growth in a century. Gross domestic product has nearly doubled, while the poverty rate has halved. Foreign investment has surged. More than a million jobs have been created, many in manufacturing and services. After decades of lagging behind other countries in Southeast Asia, Myanmar looked set to become a productive and internationally connected economy.

The coup is an immediate and fundamental threat to this progress. Trade and investment in important and quickly-growing sectors like garments and textiles face an existential crisis. For international brands, Made in Myanmar now presents a major reputational risk. The possibility that Myanmar will lose its preferential trade privileges with the European Union and the U.S. could further harm these sectors. New investments are likely to drop significantly. 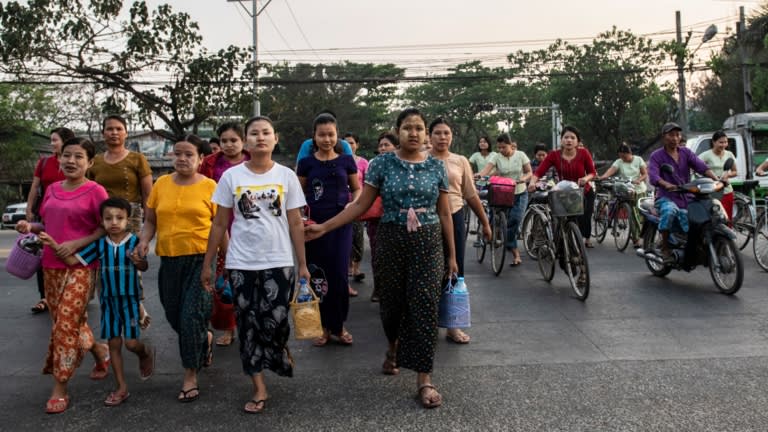 Workers leave their factories in Hlaing Thar Yar Township, outskirt of Yangon in February 2020: the coup comes on the heels of the most robust decade of economic growth.   © NurPhoto/Getty Images

The coup also increases the risk that Myanmar's economy will again become heavily dependent on China. For much of the Myanmar business community, this is a worst-case scenario. The country's manufacturers already struggle to compete with Chinese efficiency. Agricultural traders -- who receive lower average prices for commodities than in most other countries -- will have fewer export options and be forced to take whatever prices Chinese buyers offer. The result will be economic stagnation.

Is Myanmar destined to go down this path? Not necessarily. While the current crisis shares many similarities with political upheavals in 1988 and 2007, which were also marked by large protests, the country's economy and private sector are in a much better position.

COVID-19 aside, the economy has rarely been stronger. The 1988 protests were triggered by sluggish economic growth, botched currency reforms, widespread shortages in goods and a poor rice harvest. The 2007 Saffron Revolution was sparked in part by a dramatic increase in fuel prices. In contrast, the current crisis has occurred when the economy is strong and the private sector is growing.

Unlike in past crises, Myanmar's private sector has a significant degree of independence from the government. In 1988, the state directly controlled an estimated 40% of the manufacturing sector and fully owned some service sectors such as banking. Now the economy is largely private. The number of state-owned enterprises -- about 800 -- pales in comparison to the nearly 70,000 companies and more than 200,000 locally registered businesses throughout the country. The number of foreign-invested entities amounts to about 2,000, a record in the country's post-colonial history.

Myanmar's private sector is also less dependent on the government for its economic survival. The private sector has often been portrayed as being dominated by military cronies and violators of labor rights. Although this criticism applies to some businesses, the sector has also become more diverse, and companies are increasingly dependent on productivity -- not patronage -- for their survival. Markets work differently now.

This gives the private sector an unprecedented opportunity to exert influence on resolving the crisis. At a minimum, the leading business organizations should collectively call for a peaceful resolution. At least two smaller organizations have taken even bolder action, joining the civil disobedience movement or declaring the coup illegitimate. Other organizations could follow this example.

If the country's private sector keeps silent, it risks being seen as complicit. Some business associations are already being criticized online, and there have been calls to boycott leading businesses. Potential business partners and international donors that work with the private sector may view involvement with Myanmar businesses -- and the country as a whole -- as reputational risks that are not worth taking. This only increases the likelihood that the economy will again become overly dependent on China.

By advocating a peaceful resolution, Myanmar's private sector can demonstrate its independence and bolster the chances that it can remain internationally engaged, while reducing the likelihood of damaging sanctions. Calling for the police and military to refrain from violence creates risks for the safety of business owners and staff. It also raises the prospect of economic retaliation by the military, though some safety can be found in collective action. However, for the sake of the future of the business community and the country, speaking out is a risk worth taking.