Southeast Asian bloc in danger of whitewashing a heinous regime 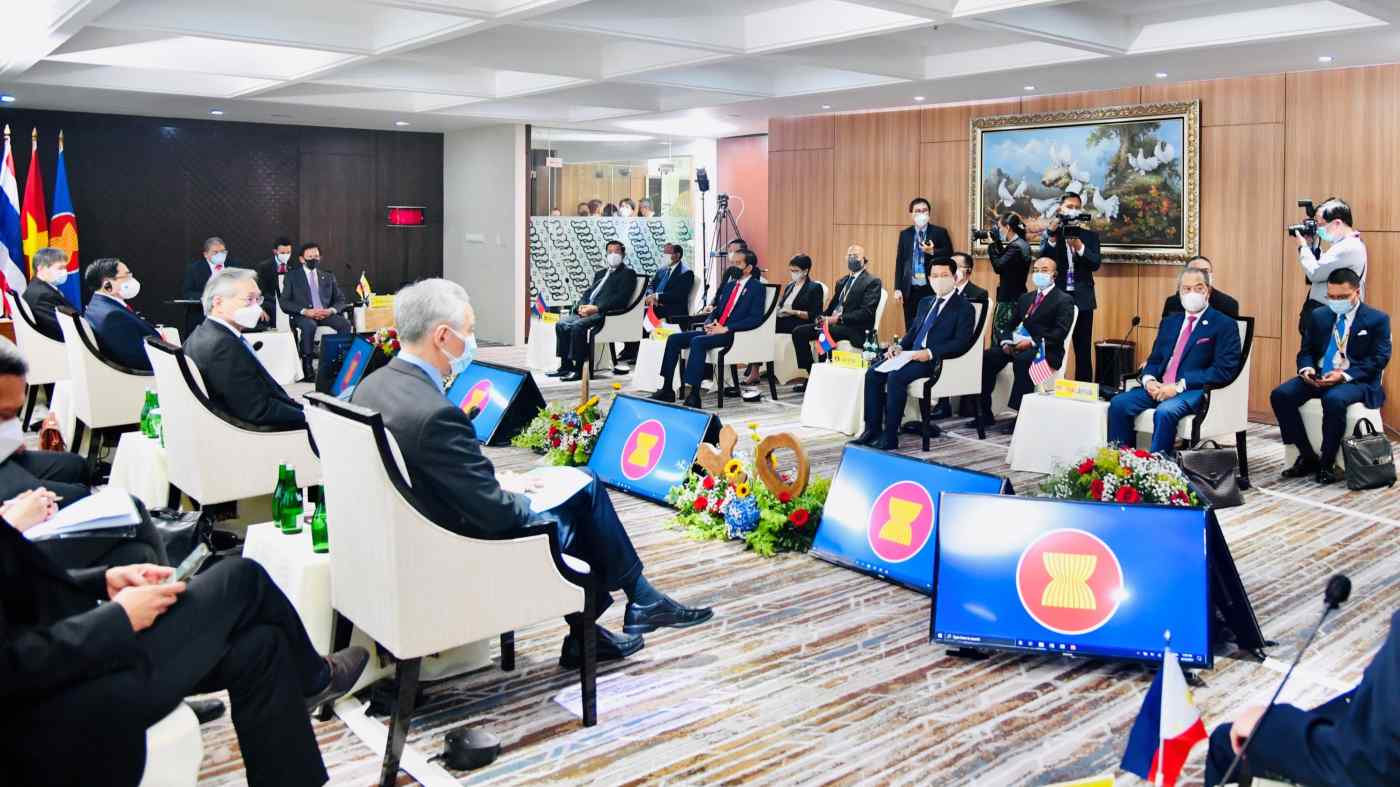 ASEAN's desperate and overdue "special" summit in Jakarta nearly three months -- and over 730 civilian deaths -- since Myanmar's Feb. 1 coup has predictably yielded the lowest-hanging fruit from an already tall and growing tree.

By giving regional recognition to Sen. Gen. Min Aung Hlaing and Myanmar's military, or Tatmadaw, in exchange for a Five-Point Consensus calling for an end to violence, dialogue and humanitarian assistance, with the setup of an ASEAN envoy to head a delegation on a visit to Myanmar, the 10-member bloc risks being taken for a ride by its rogue member.

Unless it rebalances and stiffens its approach in view of the competing civilian-led National Unity Government, or NUG, the Association of Southeast Asian Nations may end up dancing to the Tatmadaw's tune and further fueling Myanmar's nascent civil war.

To be sure, no side opposes the summit's agreements in principle. The problem is that a cessation of violence among "all parties" can be interpretive and manipulated in practice. While the Tatmadaw is the overwhelming perpetrator of brutality against its own people -- including arbitrary arrests, indefinite detentions and physical tortures -- it denies responsibility for the violence in the name of duty and self-defense. Its own civilian death toll estimate is less than half that of estimates by rights groups, while the more than 4,000 political prisoners were left out of ASEAN's five-point position altogether.

Any impactful and legitimate dialogue would have to include a role for the Tatmadaw's civilian detainees, including deposed leader Aung San Suu Kyi, whose National League for Democracy twice triumphed resoundingly at elections in 2015 and last November over the military's proxy Union Solidarity and Development Party.

In fact, the immediate release of political prisoners and a restoration of democratic governance based on poll results were the two omissions that showed ASEAN's new fault line

In the early post-coup days, Indonesia, Malaysia and Singapore were the most vociferous in their criticisms of the Tatmadaw's blatant seizure of power and use of deadly force, demanding the coup's reversal. The Philippines and Thailand fell short of favoring a return to democracy but called for political prisoners to be freed.

Other ASEAN governments were muted. As post-coup days rolled into months, only Indonesia's and Malaysia's leaders now still allude to democracy in Myanmar. ASEAN's declining democratic standards, especially in Thailand and the Philippines, bode ill for regional unity and its global relevance.

It was also telling that Thai Prime Minister Prayuth Chan-ocha skipped the summit and sent a substitute. The absence of Prayuth, a military strongman who initially rose to power in a coup in 2014, was conspicuous because Thailand has the highest stakes in what happens next in Myanmar, sharing the longest of its next-door neighbor's five international borders.

Myanmar's natural gas helps to generate about 30% of Thailand's electricity, and migrants from the country make up nearly 10% of the receiving country's workforce. Thailand's and Myanmar's militaries have long cultivated close ties. Min Aung Hlaing considers himself an adopted son of the late Prem Tinsulanond, a former Thai army chief and prime minister, and sent a personal letter to Prayuth asking for support shortly after staging the coup.

Yet a broad slide into bolder and deeper authoritarianism across the region -- with or without multiparty elections in Cambodia, Laos, Thailand and Vietnam, as well as Brunei and the Philippines -- means that the grouping will only be able to muster a bare minimum when it comes to taking on the Tatmadaw. Min Aung Hlaing and his partners in what many now consider crimes against humanity are evidently aware of the strengthening authoritarianism among ASEAN's membership. Otherwise, the junta chief would not have made the summit trip. 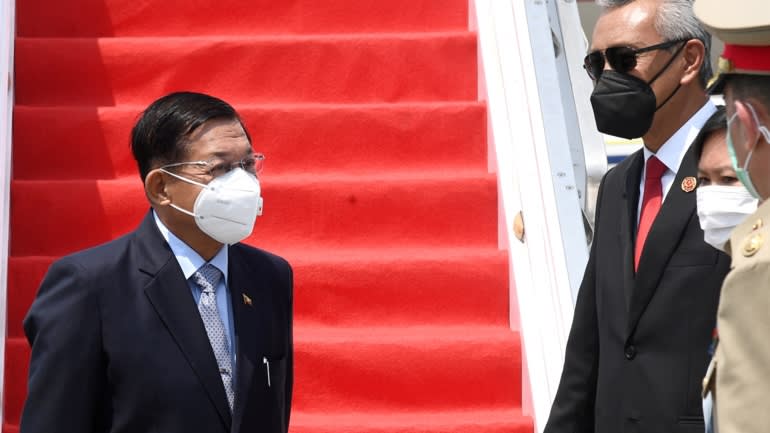 Min Aung Hlaing, left, is welcomed at Soekarno Hatta International Airport on the outskirts of Jakarta on Apr. 24: Myanmar's junta chief is aware of the strengthening authoritarianism among ASEAN's membership.   © Indonesian Presidential Palace/Reuters

For Min Aung Hlaing, the meeting was a good deal. He gained immediate recognition and a semblance of legitimacy as head of Myanmar's government, telling his side of the story about claimed but still unproven electoral fraud. The concessions he has to make from ASEAN's consensus can be done on his own terms when he so chooses because there is no timetable. ASEAN's envoy and visiting team can also be received under Tatmadaw conditions on its own turf. Unsurprisingly, regional legitimacy dividends were quickly reaped at home as government news reports beamed home images of the dictator with a seat at the ASEAN table.

For Myanmar's elected parliamentarians under the Committee Representing Pyidaungsu Hluttaw, the Civil Disobedience Movement and the Ethnic Armed Organizations -- among other anti-coup columns that constitute the NUG's popular base -- the ASEAN summit was a raw deal. Not only was the NUG unrepresented in this intergovernmental meeting, but the unmentioned opposition movement was lumped into all parties. The NUG's constituents are likely to feel alienated and betrayed by ASEAN. Their fight is likely to intensify.

While ASEAN leaders may be heaving a sigh of relief for being seen to be doing something about Myanmar, they are in danger of whitewashing a heinous regime that robbed its people of a democratic mandate. The ASEAN summit needed to bargain hard vis-a-vis Min Aung Hlaing, led by Indonesia and Malaysia. Sources of leverage include the suspension of Myanmar's membership and/or the NUG's recognition. The alternative is to appease the Tatmadaw while it has its way with the people of Myanmar.

The old thinking of power politics suggests that what is done is done. But the NUG has changed all that. The Tatmadaw can rule with ruthlessness but its ability to govern is being denied by NUG followers. The new playbook being written in Myanmar requires new thinking.