Myanmar's military regime has nothing left to offer

How much damage will it be allowed to inflict on the country and region? Philipp Annawitt served as an adviser to Myanmar's parliaments and government from 2015 to 2021.

Days after Myanmar's generals seized power in February, the new government promised to schedule fresh elections within a year -- once the "problems" with the electoral system had been fixed -- then hand over power to whoever wins and retire to their barracks.

This is obviously not the plan: the November 2020 elections had no serious irregularities, the regime is almost universally reviled, and its proxies could never win a democratic election. The military's violent suppression of protests has resulted in the deaths of over 900 civilians and the arrests of many more. In June, the Tatmadaw, as the military is known, burned down an entire village in Myanmar's Bamar heartland, displacing thousands and killing those who could not flee.

The glaring contradiction between professed policy and actions marks the complete erosion of what remains of the Tatmadaw's ideological underpinnings and its self-professed raison d'etre.

Successive military regimes since 1962 have built their legitimacy on being able to hold Myanmar together against various ethnic minority uprisings as well as a strong communist insurgency. Denying the insurgents access to community support has often meant brutal blanket suppression of ethnic minority communities.

This was combined with an attempt to burmanize ethnic minority communities and destroy their distinct identities in order to build a more homogenous country dominated by ethnic Bamars. These ethno-chauvinist policies continued well into the reform era of the early 2010s, when then-President Thein Sein introduced four race and religion laws to suppress interfaith marriages and impose population control measures on minorities.

But by razing Bamar villages, the Tatmadaw are now using the same brutal tactics on their own people in Myanmar's heartland. It is one thing to shoot individual protesters, or "foreign agents" according to the regime's propaganda. It is quite another thing to wipe out a village. With this, the Tatmadaw is burning the last shreds of legitimacy.

By legitimacy, I do not mean just the democratic legitimacy that comes with being elected. Myanmar's military governments never had this. But legitimacy can also be conferred through widely accepted ideology, tradition, or through good governance.

Xi Jinping's China is a perfect example of an increasingly personalized regime that draws legitimacy from a stellar economic performance and increasing international clout. Legitimacy may also be of the sinister kind. The Tatmadaw boosted support among ethnic Bamars following the 2017 genocide against the Rohingya. Race and religion was still working for them there.

Tatmadaw apologists argue that, despite all that, Myanmar's military is the only institution that can keep the country together, to ensure the "non-disintegration of the Union," in Tatmadaw-speak. But the fact is they are not keeping the country together.

Wa State has been de facto independent for more than a decade. That may be strategically unimportant hinterland, but now the regime is letting Rakhine State slip away, where Rakhine ethnics are building a parallel administration. Rakhine is the source of most of the country's natural gas and is the endpoint of the China-Myanmar Economic Corridor that links China's Yunnan province to the Andaman Sea.

With its seizure of power in February, the Tatmadaw has broken its own semi-democratic constitution. The regime's governance performance has been woeful, as evidenced most recently by its inept handling of the deadly third wave of COVID-19. Burning Bamar villages and letting Rakhine State slip away, the Tatmadaw have no story left to tell. 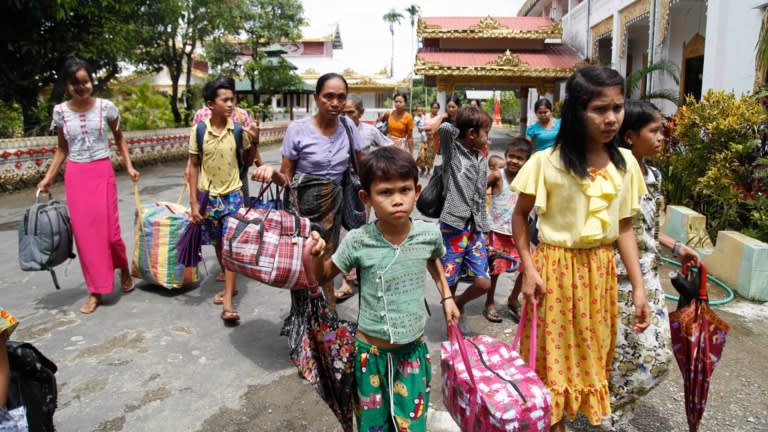 Ethnic Rakhine villagers arrive at a temporary monastery camp with their belongings on June 29: the regime is letting Rakhine State slip away,   © AP

The implication is that, in the longer run, the regime will not last. It will not go easily. It will cling on by defending the remnants of its rentier state until it falls. This could take many months.

In the meantime, the region will be destabilized by cross-border refugee flows -- over 230,000 people have already been internally displaced by the recent violence. The risk of widespread starvation will push many across borders. An uptick in drug and arms trafficking is already being seen as ethnic armed organizations arm themselves, increasing the likelihood of conflict spilling across borders.

The National Unity Government Parliament opposing the regime is backed by the National Parliament, which was elected last year, and which just met for the first time since February. The National Unity Government has formulated an inclusive political vision for the country that is in principle acceptable to the country's ethnic minority groups, and built a cross-ethnic coalition. It has pledged to resolve the Rohingya crisis, including returns and a path to citizenship.

Having no control over territory other than those border areas in the north and southeast held by its allies, the National Unity Government has been largely snubbed by the international community. The fact that Myanmar's democratic opposition has ties to similar movements across East and Southeast Asia, makes many of its authoritarian neighbors uncomfortable. Slow progress is being made toward establishing ties with foreign governments.

Still, the only route to much-desired stability in Myanmar is for its neighbors and the international community to engage the National Unity Government. They are the only force with enough credibility to claim power. Wait much longer and there will be no good options left as the country descends further into chaos.