The silver lining in the dull pockets of Japanese telecoms NTT Docomo's move is a sign of a more agile telecom industry -- and Japan Inc.   © Reuters

"NTT Docomo signals fierce mobile price war." The headline would seem to say it all about the epic rout in telecom stocks which followed the Oct. 31 news that the Japanese giant would slash charges by as much as 40%.

But no. That was a Financial Times story from 2008, when shares slumped after a newcomer entered Japan's mobile scene for the first time in many years.

Ten years later, you might have thought that investors would have grown used to the idea of price competition in mobile services. However, they are somehow once again quaking over reduced costs for consumers who still confront the second-highest mobile bills among Organization for Economic Cooperation and Development nations.

Granted, NTT Docomo President Kazuhiro Yoshizawa wins no awards for subtlety. Markets were caught flat-footed by the announcement. So were rivals Makoto Takahashi, president of KDDI, and Masayoshi Son, CEO of SoftBank. Their companies' fortunes took hits amid the $30 billion combined loss of Japanese telecom stock market value on Nov. 1.

You have to marvel at a corporate decision that manages to raise the collective ire of the nation's richest man (Son), its central bank, and scores of complacent stock punters. 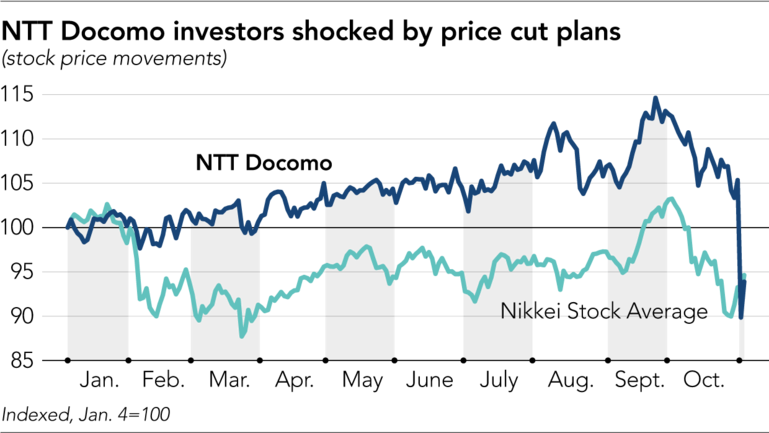 But it is worth considering three reasons why Yoshizawa may actually be the hero of this economic morality play.

One: Economic reform is complicated. For six years, Prime Minister Shinzo Abe has been pledging to level playing fields and promote fair competition. Other than tweaks to corporate governance, Abenomics can claim few wins with reforms, especially in liberalizing markets.

Of course, you can say that NTT Docomo's bombshell hardly helps the competition. The botched disclosure has complicated Son's plans to raise a whopping $27 billion by floating SoftBank's mobile business on the stock market. It also put KDDI under new pressure, even as it unveiled a tie-up with online sales giant Rakuten, its own positive shock to the system.

But, in truth, Yoshizawa just handed the prime minister a big win on the economy: a shakeout in a cloistered industry long crying out for a competition. While some change has been in the pipeline, including next year's market entrance of Rakuten, it is no coincidence that high mobile fees have long been an obsession among Abenomics architects.

The latest reminder came in August, when Chief Cabinet Secretary Yoshihide Suga called for lower charges, urging the very 40% cut that came out of Yoshizawa's mouth.

Economic change can be disruptive. But liberalization of uncompetitive markets brings consumers benefits and releases spending power for other purposes, so potentially stimulating the economy in the best possible way -- and without yet another monetary injection.

A similar impact can be expected from Abe's big international economic deals -- the free-trade pact with the European Union, and the market-opening Trans-Pacific Partnership.

Two: But, there is a problem, as the Bank of Japan is in a tough place. While price cuts and trade liberalization accords please consumers and may eventually boost growth, they do not get the central bank closer to its 2% inflation target.

One of Team Abe's biggest mistakes has been aiming at inflation. It should instead shoot for 2% salary gains, or a 2 percentage-point increase in gross domestic product rates. It bet (wrongly) that boosting inflation would restore animal spirits, catalyzing CEOs to raise wages and consumers to spend.

That focus makes for some terrible sound bites. The Nikkei Asian Review recently quoted a senior BOJ official: "A further drop in wireless fees would put downward pressure on [overall] prices." That will not have gone down well in the soba shop.

What Kuroda's team views ominously as a "sectoral shock," households will rightly view as a respite from the costs of Japan Inc. inefficiency. In an August Nikkei poll, 65% of respondents complained wireless fees are too high.

These people claimed that lower network costs would enable them to spend the cash they save elsewhere. We won't know whether this is true for a while, but it is surely worth a try.

Three: It is high time to take business risks. Japanese carriers have had it too easy for too long. Now, their cozy dominance is ending, not least in the face of an aging population.

Japan already has about 1.3 subscriptions for every person. Since 2008, when the FT ran that price-war headline, carriers followed a model: boosting sales by making it easier to upgrade to newer, faster phones. It opened opportunities to get consumers to use more data on social media feeds, e-commerce platforms, games and streaming video.

The industry now faces shrinking prospects that only innovation can overcome. The reason NTT Docomo's stock outperformed the broader Nikkei Stock Average for much of this year is an early lead in high-speed 5G networks, particularly with the 2020 Tokyo Olympics on the way.

That gives Yoshizawa latitude to experiment with lower fees now, knowing any losses can be recouped. This leaves peers at a disadvantage.

By providing the best service, with the most options, NTT Docomo can strengthen its market share with young, data-hungry users and cash in later.

Opportunities abound, too, as Japan reaches a demographic milestone: One-fifth of the population is now 70 or older.

NTT Docomo can build on its 2012 focus on designing phones for the elderly. Yoshizawa could increase research-and-development budgets to add services like remote access to appliances, home security and to devise household robots using NTT Docomo-designed operating systems. Why not, too, create applications for users to supervise children or aged relatives remotely?

The next 10 years will be very different from the last 10 for mobile companies. They must invent new pricing systems for networks and handsets. They need new services to bundle into their orbit of users, maximizing profits.

But all is not lost. If Yoshizawa's move is the sign of a revitalized NTT Docomo -- and indeed a nimbler Japan Inc. -- the sell-off may yet prove a buying opportunity.