Rollout was meant to be a moment to shine A health worker shows Covishield vaccine in Gauhati on Mar. 1: the Modi government chose to be penny-wise and pound-foolish.   © AP
CopyCopied

As late as February, experts and reputed international media were remarking on how well India had done in combating COVID-19. Indeed, cases were down, and many assumed the worst was over.

For Indians, life was back to normal, while much of the Western world was entering new lockdowns. This apparent insouciance was despite the confirmed arrival in India of dangerous new variants of the virus known to be far more transmissible.

Indu Bhushan, CEO of the government's Ayushman Bharat medical insurance scheme, declared the pandemic to be "self-limiting," as the reproduction rate of the virus had fallen below one in India, and questioned India's need to finance COVID-19 vaccines. Many assumed that India had achieved herd immunity.

Even as cases ominously began to rise by the middle of February in some states, and as some experts began to warn herd immunity may be a myth, Prime Minister Narendra Modi asserted that India's successful fight against COVID-19 "is inspiring the entire world."

Meanwhile, Modi and his Home Minister, Amit Shah, had already begun addressing mass rallies for upcoming elections in several states where hundreds of thousands of people were packed like sardines into rally grounds with little or no mask use. Likewise, large festival celebrations have been allowed to continue with no regulatory intervention. 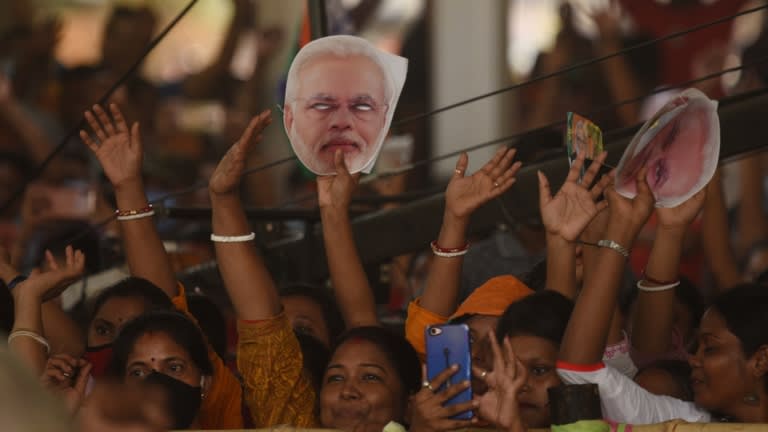 Supporters during a public rally by Narendra Modi for West Bengal Assembly election at Barasat, pictured on Apr. 12: hundreds of thousands of people were packed like sardines with little or no mask use.   © Hindustan Times/Getty Images

India is now in the grip of a deadly new wave of COVID-19. Recent days have seen record-breaking new infections and deaths, and with hospitals stretched beyond capacity, crematoria working round the clock, and fresh lockdowns and curfews reimposed in many regions of the country.

What is more, the country often described as the pharmacy of the world has incongruously run short of vaccines, with many clinics in hard-hit regions forced to shut down as supply has run out. India's vaccination rate per capita, four months into the vaccination drive, is among the lowest of major countries, at 7.4%.

In retrospect, India's reliance on one major foreign vaccine, from AstraZeneca, as well as one major indigenous vaccine, Covaxin, was a shortsighted policy decision. AstraZeneca's vaccine, manufactured under license by the Serum Institute of India (SII) and marketed in India as Covishield, was intended for domestic use, contracted sale for developing countries and the COVID-19 Vaccines Global Access (COVAX) Facility, an international consortium backed by the World Health Organization for equitable access to vaccines.

The local alternative was approved for use in India before its final phase of trials, results of which were released fully two months after the vaccine went into use. The out-of-turn approval for Covaxin was widely recognized as part of the Modi government's campaign to buy local, whether or not the local product was up to snuff. As it happens, fully 90% of India's vaccines administered so far are made by SII.

At the World Economic Forum's virtual meetings in January, Modi had said India was expecting to become "self-reliant" in vaccines, and this could be a boon to the world. Belatedly, given the current crisis, India has contracted with other foreign pharmaceutical manufacturers, including Russia's Gamaleya Institute, U.S.-based Novavax and Johnson & Johnson, among others, for manufacture under license.

After initially insisting on bridging trials, which are supplementary to the original trials of vaccines already approved elsewhere, the Indian regulator did an about face and is now authorized them for emergency use. But none of these new vaccines will be available for use for several more months.

The Modi government chose to be penny-wise and pound-foolish in its tightfisted negotiation with SII. In January, SII's CEO, Adar Poonawalla, had suggested that his company, a private pharmaceutical company, would price the vaccine at 1,000 rupees ($13) per dose for private sale in India and charge the government 250 rupees per dose. In the end, the government bargained SII down to 200 rupees and then further renegotiated to an even lower 150 rupees per dose for a sale of 100 million doses.

To be fair, shortages of critical raw materials have also played their part. But it is impossible to gainsay the fact that the hard bargain the Indian government drove has left SII short of the financing necessary to expand its production capability.

The government's grandstanding through vaccine diplomacy, in the form of gifts or sales of Covishield, disingenuously marketed as "Indian vaccines," to other developing countries became a distraction from ensuring there was enough vaccine for Indians. As things stand, with SII's stunted production capacity, AstraZeneca has filed a legal notice for nonfulfillment of SII's contractual obligation to them.

Likewise, the COVAX Facility has reminded SII of its legal obligation to export its committed consignment of vaccines. Given that the Indian government has halted export sales, SII has been forced to divert all vaccines it produces for domestic use, calling into question its capability of meeting its commitment to COVAX.

India is caught between a rock and a hard place. While struggling to vaccinate its own population, it is also failing to live up to its own boast of being the "pharmacy to the world." As Indians in record numbers continue to be infected and continue to die, the world's largest vaccine manufacturer, SII, is struggling to produce the lifesaving vaccine.

This was India's moment to shine as a vaccine manufacturing powerhouse. It failed the test due to the Modi government's mismanagement, putting the burden of vaccinating India and the world on a single private company, while tying its hands. Meanwhile, Modi, while admonishing Indians to behave responsibly in the face of COVID-19, continues to brag about the huge turnout at his election rallies.