Instead of bold reforms, PM has relied on cash handouts and divisive culture wars Modi relies too heavily on a select group of bureaucrats to implement his vision.   © Hindustan Times/Getty Images
CopyCopied

Despite his pro-business image, Prime Minister Narendra Modi is proving increasingly inept at managing India's economy, with his dream of building a $5 trillion behemoth by 2025 now looking increasingly unachievable.

A native Gujarati, one of India's most advanced industrial states, Modi has consistently raised hopes that he'd fix the economy and create enough jobs for the 12 million youths who join the country's workforce each year.

Yet six years after riding a wave of optimism into office, India's economy is a shattered mess, with gross domestic product contracting by a whopping 23.9% in the April-June quarter for the first time in four decades and unemployment at an all-time high. None of the major growth engines -- consumption, private investment, or exports -- are firing. Worse, the government doesn't have the capacity to try and spend its way out of the downturn.

Managing the economy hasn't been Modi's only fumble. After promising to rein in corruption, Modi approved a disastrous banknote demonetization scheme aimed at eradicating the black market economy and clamping down on tax evasion. In addition to the chaos it created, the scheme ruined the prospects of hundreds of thousands of farmers and small to medium enterprise owners, the two sectors which relied most on cash transactions. While supporters insist the adverse impact of the note ban was short-term, the supposed long-term gains in the fight against corruption remain a pipe dream.

Then came the introduction of a nationwide goods and services tax, which, weakened by inconsistent rates and a plethora of exemptions, hasn't been the game changer voters were promised. Instead of creating a seamless market of 1.3 billion people that businesses could tap to grow faster, it's been a compliance nightmare. In other words, Modi's attempts to use the note ban and the GST to help clean up the Indian economy have actually dampened India's growth prospects. 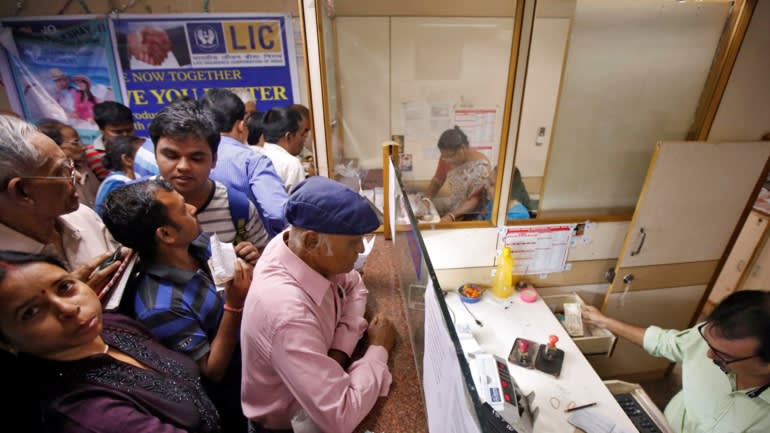 People queue to deposit 500 and 1,000 Indian rupee banknotes inside a branch of Indian Bank in Kolkata in November 2016: Modi's attempts to use the note ban to help clean up the economy have dampened growth prospects.   © Reuters

Another unfulfilled commitment was the promise to end the "tax terror" unleashed by the former Congress-led government. Instead, by empowering tax officials with draconian powers, Modi has added to India's tax uncertainties, further deterring existing and prospective investors. And if that was not enough, creeping trade protectionism is making it difficult for businesses to manage their supply chains efficiently. Not only does that sustain inefficient industries and discourage exports, it's a repeat of a lesson India already learned during the four decades of the license raj that saw GDP growth rates capped around 4%, and which was eventually dismantled in 1991.

Astonishingly, the Modi government has embraced this failed policy, raising import duties on over 3600 goods, with more and more products being placed on the restricted import list in order to indulge a few business cronies at the expense of consumers. Despite winning comfortable parliamentary majorities, Modi has squandered the opportunity to push through tougher labor and land reforms, instead doling out cash handouts to win short term popularity. No wonder private capital investment sentiment remains so bearish.

Foreign direct investment inflows look decent enough in absolute terms, but, as a proportion of GDP not much has changed, and it is still hovering at around 2.5%. Moreover, most of the FDI inflows are narrowly focused on a handful of sectors such as information technology, business process management, and e-commerce, adding little in the way of new capital assets or job creation. Sound policymaking requires quality technical inputs. While Modi is certainly not lacking advice, he does seem unwilling to act on it. No politician likes criticism, but the better ones know how to learn from their mistakes and adapt accordingly.

Modi also relies too heavily on a select group of bureaucrats to implement his vision, forgetting that civil servants are natural incrementalists with little incentive to push through radical reforms. And because reforming India means curtailing the discretionary power of the bureaucracy, why would the civil service cooperate in checking its own power? Transfixed by the stock market, which is in turn dominated by large corporate interests that are also Modi's major political donors, it's their concerns that get priority, particularly when it comes to keeping interest rates low and cutting corporate tax rates.

SMEs don't have any serious influence on stock markets. Hence, the issues faced by SMEs don't get the attention they deserve. The two policy initiatives that have most affected them -- demonetization and the GST implementation -- have been a disaster, completely missing the important role they have to play in boosting overall employment, ensuring fair income and wealth distribution, and boosting economic growth. What Modi doesn't seem to understand is that neglecting small businesses has hurt the overall prospects of India's economy. A dry fruit vendor speaks to a customer in New Delhi: what Modi doesn't understand is that neglecting small businesses has hurt the prospects of the economy.   © AP

India watchers may ponder why a government with a comfortable majority is not embracing bolder reforms. The answer also lies in the fact that India has been cursed by a weak and uninspiring political opposition, allowing Modi the luxury of governing in the knowledge that he can probably hang onto power irrespective of how the economy performs.

Given the inherent limitations of India's first-past-the-post voting system, it's easier to win an election by relying on cash handouts and polarizing voters along communal lines rather than implementing much-needed but politically unpopular reform measures. Better economic management may not necessarily lead to electoral wins. That sums up Modinomics.