Tugboats dock an oil tanker carrying crude oil from Iran at the port of Zhoushan in March 2018: China could look to ramp up imports from the petroliferous country.   © Imaginechina/AP
CopyCopied

As part of a major realignment of global alliances, China is looking to forge stronger ties with Iran. Recent reports of the two countries preparing to sign a 25-year economic and security deal, though not officially confirmed by either side, have stirred up discomfort in a few capitals across the world.

It would not be surprising for oil to figure prominently in a comprehensive deal between a major OPEC producer and the world's second-largest crude importer as American enmity toward both increases. If this pact does come to fruition, it could unleash a bigger wave of crude flows from Iran into China, flying in the face of oil and economic sanctions against Tehran imposed by U.S. President Donald Trump's administration.

One can think of a variety of far-reaching ramifications of the proposed strategic alliance, but in the world of oil alone it has the potential to heighten anxiety, uncertainty and even conflict in several dimensions -- between the U.S. and Iran, within OPEC and by pitting Chinese refiners benefiting from cheaper Iranian crude against their peers across Asia.

According to an 18-page draft of the deal reportedly circulating online, China would invest up to $400 billion over 25 years in Iran's banking, telecommunications, ports and railway sectors, among others. The countries will also deepen military cooperation -- something that is bound to raise the hackles of Iran's rivals in the Middle East and risk further destabilizing the region. It has major implications for the world's energy security.

Iranian crude production has nearly halved from about 3.8 million barrels per day because of U.S. restrictions on its exports since November 2018, which were tightened into a fully-fledged ban in mid-2019. However, its oil exports have not been squashed to zero, despite the Trump administration's threats last year to ensure that happened. That has been in large part due to China's continued support.

China has been importing Iranian crude through low-profile domestic companies that do not have an exposure to the U.S. dollar-denominated international financial system. China has also skirted U.S. sanctions by storing Iranian crude arrivals in bonded storages, which are akin to free-trade zones, which means the barrels are technically not an import into the country.

Since the imposition of U.S. sanctions on Iran, there has been no official data either on Iran's crude exports or the quantities imported by its few buyers, all of which are in Asia. However, companies tracking international oil tanker movements provide clear evidence that China remains the predominant importer of Iranian crude.

China bought on average 225,000 barrels of crude and condensate per day from Iran in the second half of 2019, 81% of the latter's total exports, compared with 400,000 barrels or 43% in the first half, according to Platts and Bloomberg data.

If China extends loans to Iran under the new partnership agreement, it could look to ramp up crude imports from the country, especially if they come at highly discounted rates, as the reports indicate.

Oil-for-loan deals fall in a gray area with regard to U.S. sanctions. China and Russia have continued to import crude from Venezuela, another trade prohibited by U.S. sanctions, arguing that it is repayment for their loans to the Latin American producer.

Meanwhile, refiners across Asia are keeping a wary eye on the developments. A relentless growth in Chinese refining capacity over the past decade, continuing even through this year's coronavirus-induced demand destruction, has unnerved refiners in the region. 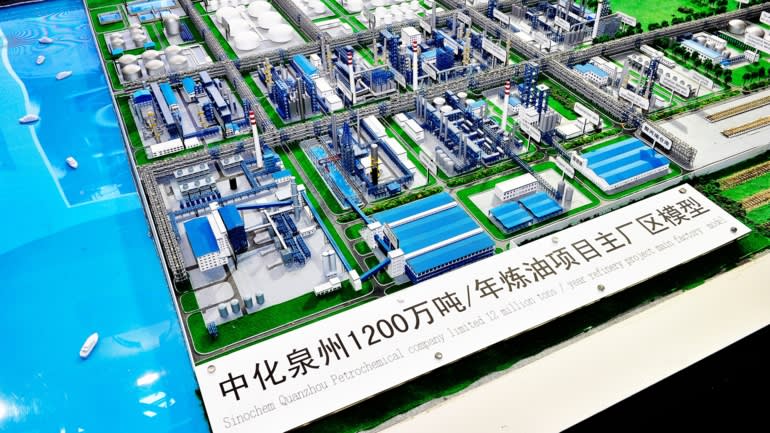 A model for the refinery project of Sinochem Quanzhou Petrochemical, pictured in June 2015: a relentless growth in Chinese refining capacity has unnerved refiners in Asia.   © Imaginechina/AP

With surplus refining capacity increasing compared with domestic fuel demand, China is becoming a growing exporter of refined products. That puts under pressure the profit margins of refiners elsewhere in Asia.

India, the second-largest crude importer and oil consumer in Asia behind China, is also vying for a commercial footprint in Iran. If it gets elbowed out of its coveted Iranian port or energy development projects, that could intensify tensions between New Delhi and Beijing, close on the heels of the recent worrisome border clashes between the two countries.

India has been eyeing a gas pipeline from Iran for several years, although the project has been pursued in fits and starts. The South Asian giant remains keen to help Iran develop its oil and gas resources, filling a vacuum created by the retreat of Western companies.

Finally, a substantial increase in Iranian crude exports could throw a spanner in the OPEC and non-OPEC crude supply-restraint strategy, whose success is crucial for market balance during this year's unprecedented global oil demand slump. Increased flows from Iran would need to be accommodated by its OPEC peers surrendering some of their market share, causing fresh tensions in the producers' group.

The new "Chiran" axis could become yet another destabilizing factor in a world besieged by uncertainties. Directly or indirectly, its effects are bound to reverberate through the oil sector.