It has been a stellar season for Indian-born Americans at the top echelon of the professional world.

Parag Agrawal became CEO of Twitter, replacing Jack Dorsey, and Gita Gopinath become First Deputy Managing Director of the International Monetary Fund, the first Indian born individual to hold the position, the highest any non-European can rise within the organization.

The domination of Indian American talent at top American multinational companies, especially in high tech but also in academia and international institutions, only seems to go from strength to strength. Agrawal joins Satya Nadella at Microsoft and Sundar Pichai at Alphabet, Google's parent company. Gopinath, before her promotion, was chief economist of the IMF, a position previously held by Indian-born Raghuram Rajan, a senior academic at the University of Chicago.

People born in India occupying top positions at other global companies worldwide include several women such as Canadian American Sonia Syngal, CEO of the clothing giant Gap, and Americans Revathi Advaithi, CEO of Flextronics and Indra Nooyi, CEO of PepsiCo. The list of Indians at the very highest levels of the corporate world goes on and on.

Agrawal's appointment led to both celebration and soul searching in India, with many wondering why those born in India had to go abroad to succeed at the highest level. Coincidentally, in the same week, the Indian government released data showing that a record 600,000 Indians gave up their nationality between 2017 and 2021.

In an August 2015 article published in Foreign Policy titled "Why are so many of the world's best companies run by Indians?," I explored why so many Indians head top American companies around the time that Pichai was named chief of Alphabet.

I identified the fact that most of these success stories typically involve people with graduate degrees, training and work experience all acquired in the U.S. Well trained in mathematics, fluent in English and at ease in the American business culture, Indians are able to transition into leadership roles much more comfortably than many other Asian-born corporate executives in the U.S., including those born in China. 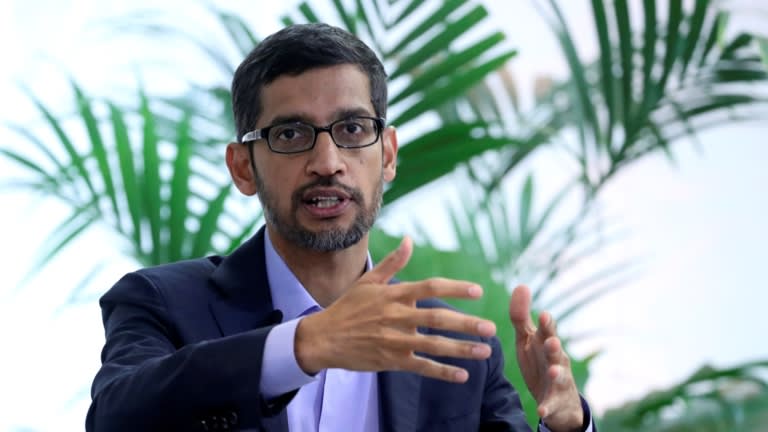 Sundar Pichai, CEO of Alphabet: most of the success stories typically involve people with graduate degrees, training and work experience all acquired in the U.S.   © Reuters

But the success of Indians on Wall Street, Silicon Valley and in Ivy League colleges is both a glass-half-full and a glass-half-empty story.

On the one hand, Indians excel in the meritocratic American work culture, but on the other, they are escaping a stiflingly bureaucratic, crony-driven, inefficient work culture back home where innovation and creativity are often punished rather than encouraged and rewarded. With the notable exception of several prominent recent startups, mostly in the tech sector, the biggest Indian conglomerates are typically headed by their founders or their descendants.

These push and pull factors driving talented Indians to the U.S. are revealed dramatically in official statistics. Using data from the U.S. Department of Homeland Security (DHS) and a reply to a question in the Indian Parliament, my analysis shows that from January 2014 to September 2021, a little under 1 million Indians have given up their passports to acquire foreign citizenship. Indian law does not allow multiple nationalities, so those giving up their passports are doing so because they have acquired citizenship elsewhere.

China, which also requires those citizens who obtain citizenship of another country to relinquish their Chinese passport, has seen no such exodus. Data from the DHS from 2003 to 2019, the last year for which data is available, shows a consistently higher number of Indians becoming naturalized every year compared to Chinese-born immigrants.

On average, 40% more Indians became naturalized in a given year than Chinese, bearing in mind that China has a larger population than India. In 2019, a whopping 64% more Indians were naturalized than Chinese. Given the large number of Indians giving up their passports in the last couple of years, that percentage may even tick up a few more points when the latest U.S. numbers become available.

This reality of a mass exodus of talent from India is not new, a phenomenon that goes back to the 1960s. However, it is a far cry from the optimistic free-market rhetoric of Prime Minister Narendra Modi in his early days in office, when his main slogan was "minimum government, maximum governance."

Modi convinced many at the time that India would once again be a land of opportunity, as it had been in the mid to late 2000s under the previous Congress-led government when the economy was growing at nearly double digits, prompting many Indians to return home with some even giving up the coveted American green cards. That hope soon faded against the backdrop of corruption scandals that helped usher Modi to power in 2014.

Today, the facts tell a different story with considerable anecdotal evidence suggesting the flight of serious talent from India, an economy where policy inaction and blunders led the economy to slow down sharply even before the pandemic, which resulted in one of the harshest lockdowns and largest economic contractions in the world.

The one silver lining today, as growth starts to recover, is the success of a number of homegrown tech entrepreneurs who have created a number of unicorns. Whether this startup culture will create enough productive and high-quality employment to retain or lure Indian talent back to India remains to be seen.

The truth is that India's level of economic development and its tangled business climate act as disincentives for India's best and brightest, a situation that is not going to change for many years to come.

The brain drain sucks the most promising talent out of India, giving a boost to the West, especially the U.S. and increasingly Canada, which is aggressively targeting skilled immigrants, especially IT talent from India.

For the majority of Indians back home, the best they hope for is to cheer their compatriots' success abroad from the sidelines where they continue to languish.