No, China will not get away with rewriting history

Beijing mainly cares about convincing its domestic audience, not the global one On Sunday March 22, Serbia's president greeted a Chinese medical team arriving to assist in the fight against the coronavirus by kissing the Chinese flag. China's state media had a field day.

This was China's mask diplomacy in action: Beijing offers aid and advice to affected countries, and contrasts its efforts with the West's fumbling responses to the pandemic, in the hope that its own responsibility for allowing the fire to spread in the first place will be overlooked.

Now Beijing is now capitalizing on China's success in containing that fire and its propaganda apparatus has gone into overdrive, covering plans to distribute experts and equipment to Spain, France and Italy.

Should we be concerned? The Lowy Institute's Natasha Kassam, writing in the Nikkei Asian Review on March 23, certainly thinks so, saying that "the rest of the world, struggling with the outbreak, is allowing this message to go unchallenged."

We should not encourage the Chinese Communist Party's worst instincts. But Kassam overstates the risk of China's version of history being widely accepted; the reality is more nuanced.

It was clear from internet chatter which the censors could not entirely suppress that the Chinese people understood their leaders had bungled the initial response to the outbreak in Wuhan. The people bore the brunt of the mistakes and the drastic responses needed to recover from them.

The spontaneous outpouring of grief, frustration and anger over the death of Dr. Li Wenliang, who was among the first to try and draw attention to the new virus and was punished for his efforts, is testimony to this. Has Dr. Li's posthumous rehabilitation entirely assuaged these emotions? I doubt it.

Tightened censorship and the laudatory tone describing President Xi Jinping's role in the people's struggle against COVID-19 suggests that the CCP is still insecure that it has put its mistakes to rest.

On Sunday, China's Ambassador to the U.S., Cui Tiankai, in an interview with an American news website, reiterated his opposition to the conspiracy theory gleefully spread by some of his colleagues that the virus originated in an American military lab. "How can we believe all these crazy things?" Cui asked rhetorically.

But the most intemperate of his colleagues, Foreign Ministry spokesman Zhao Lijian, was tweeting just that "crazy thing" only a few hours before, now deleted. Zhao has since taken a lower profile but has not been disavowed.

Mixed signals suggest that even the Chinese establishment is not of one mind. Since not everyone in China is accepting the CCP's propaganda, why should we assume that others will? 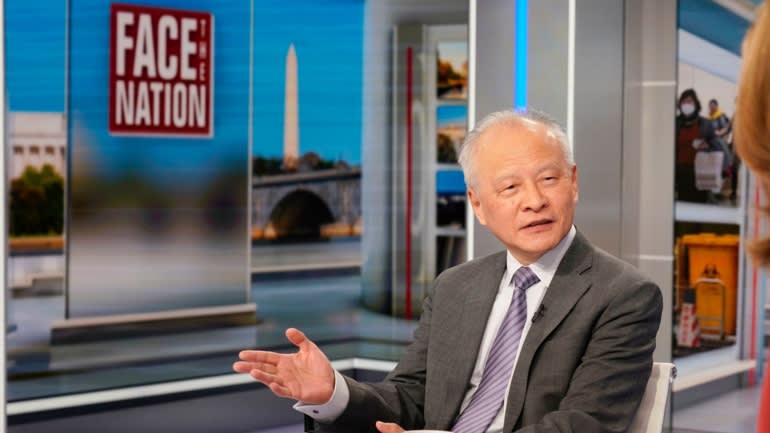 China's Ambassador to the U.S. Cui Tiankai apperas in an American news program on Feb. 9: the Chinese establishment is not of one mind.   © CBS/Getty Images

There is another reason this rewriting will not give China a purely triumphant narrative. China's recovery from COVID-19 cannot be complete unless its economy recovers too, ensuring social stability, a serious concern to the CCP.

But China cannot recover economically unless the U.S., Europe and Japan, buyers of its goods, recover. If the propaganda is aimed at projecting China as a solitary power, the reality is more nuanced. Sequential contractions in China, Europe and the U.S. raise the possibility of a global recession which will not leave China unscathed even once it has won its COVID-19 battle.

The trade war, Hong Kong protests and persecution of Uighur Muslims in Xinjiang were taking the gloss off the China story even before the pandemic. The liabilities of Chinese investments through the Belt and Road infrastructure initiative were already becoming clearer.

Nobody will ever shun China. But will China's success in dealing with the coronavirus more than temporarily erase the caution in dealing with China that was emerging in many countries?

And then there are factors outside China's control. U.S. President Donald Trump calling SARS-CoV-2 the "Chinese virus" is racist and unacceptable, but the phrase may stick in people's minds even though they dare not voice the thought. After all, more than a century later, we still call the 1918 pandemic "Spanish Flu."

Claiming victory cannot be neatly separated from taking responsibility for the bad as well as the good. The latter is the inevitable counterpoint to the former, liable to surface under stress.

We should therefore not exaggerate the potency of the PRC's propaganda. The more it builds up its success, the harsher the possible backlash will be.