Nomura is running out of time to remake itself Nomura may be learning from past errors.    © Reuters
CopyCopied

The latest revival scheme at Nomura Holdings may well have some long-suffering shareholders checking the calendar to make sure it is 2019, not 2012.

That was the last time CEO Koji Nagai rolled out an eerily similar $1 billion cost-cutting plan. The 2012 purge at Japan's largest brokerage also sought to right size the international business, reorganize management and get smarter about harnessing technological change.

Seven years on, investors are losing patience as Nagai tries to sell another $1 billion overhaul. Nomura in January booked its biggest quarterly loss since 2008 -- $900 million of red ink in the fourth quarter alone.

The stock's drop in the wake of the latest restructuring announcement this month extended a six-month loss to 23%. Nomura is trading at the deepest valuation discount to book versus global finance peers in 20 years -- about 58%, according to Bloomberg data.

This tale of woe goes back to the mistakes made in the 2008 global financial crisis when former CEO Kenichi Watanabe pulled off what seemed like the ultimate corporate coup. He grabbed crisis-plagued Lehman Brothers Holdings' European and Asian operations on the cheap, vaulting Nomura into the global top tier. 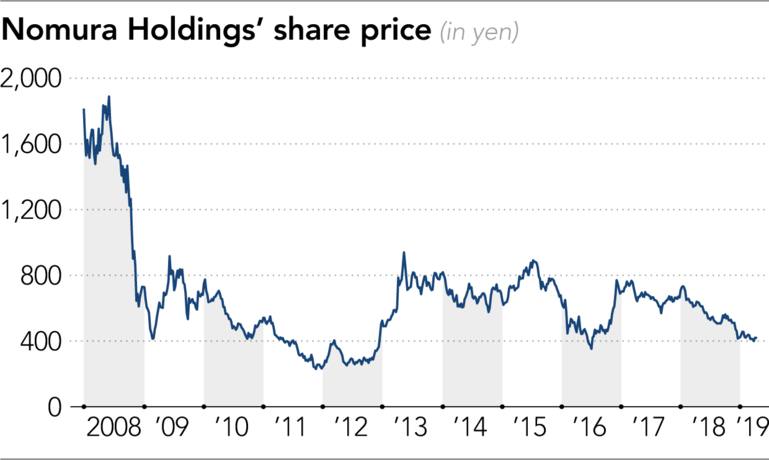 The marriage proved disastrous. Nomura oversold its capacity to absorb the freewheeling and higher-paid "Lehmanites" into a rigid management matrix. Watanabe was shown the door in 2012. Yet the legacy of Lehman-related internal tensions, runaway costs and lost opportunities is a share price down 70% since 2008.

Nagai's 2012 reset failed. The stock's 3% drop since April 3, the day before Nomura unveiled the latest overhaul, suggests investors are not buying this one either. Where does all this leave one of Japan Inc.'s proudest names? Needing to prove this is not deja vu all over again.

Nomura's aversion to change is emblematic of Japan's. At its root is a misplaced belief Nomura could grow its way back to health. A few tweaks, yes, but a chronic distaste for radical restructuring. Vested interests, conservative middle managers, concerns about losing talent through cutting payroll all hold back decisions.

The good news is that Nomura may be learning from past errors. "It has taken the hardest step toward dealing with that, though: it has written off what it spent buying Lehman," says strategist Nicholas Smith of CLSA Securities Japan. "Saying you goofed is difficult. And even saying your predecessor goofed, as is the case here, is pretty hard, too."

The clock is ticking, though. This could be Nomura's last chance to save the independence a fabled brand. If in, say, three years, Nagai's overhaul falls flat, Nomura might find itself a takeover target.

There are two immediate tests. One, convincing investors that his latest surgery can be implemented well enough to stop the bleeding. Two, that Nomura can improve profits without adding new risks to the balance sheet. In February, S&P Global Ratings said it might review the rating. So did Moody's Investors Service last November.

Nagai must treat the underlying ailments, not just the symptoms. The mistake Nomura keeps making is thinking it can cut its way to success. Nagai's team also needs to raise top-line growth.

At home, the challenges from an aging population are exacerbated by the Bank of Japan's "yield-curve control" policies. The sheer scale of BOJ purchases drove 10-year government bond yields below zero, reducing liquidity and squeezing out private investors. Over the last 12 months, there have been days when benchmark notes and bonds did not trade at all.

But a lackluster domestic market does not explain Nomura's repeated failure to translate a strong franchise into global success. It is not for lack of trying -- or shelling out billions on stop-start forays overseas.

This time around, investors will closely scrutinize the implementation process. Nagai's team needs to prove it can slash costs by 140 billion yen ($1.26 billion) within three years. Moves to close 20% of retail locations in Japan and streamline overseas operations must be carried out expeditiously.

Playing China right could offset the group's beleaguered European trading business. Between Brexit, ultralow European Central Bank rates and high costs, Nomura has ample incentive to pivot elsewhere. Along with China, Nomura will beef up its U.S. operations to ride the mergers and acquisitions wave and get bigger pieces of initial public offerings. That harbors fewer risks, than high-yield bonds. Nomura is withdrawing from trading in junk debt.

As Nomura cuts costs overseas, it needs to get more creative at home. Japanese customers are still Nomura's core, one that has been slow to shift from traditional savings to investment. Last year's rout in emerging markets and this year's trade war uncertainty is making Japanese savers even more cautious.

This requires new methods to win customers. Emulating SMBC Nikko's cross-selling prowess could help stabilize Nomura's balance sheet. Shares in the more domestically-focused Daiwa Securities Group, it is worth noting, have outperformed Nomura over the 12 months, falling by 19% compared to Nomura's 33%.

It will require a delicate balance. Nomura is moving away from aggressive face-to-face marketing toward a technology-driven industry. Thanks to rapid digitalization, "the traditional investment banking business model is crumbling," Nagai told investors.

But shareholders want more than talk. Nomura could benefit from a keener focus on digital payments, wooing the millennial set, harnessing the "fintech" boom and digitalizing trading platforms. Fortunately, in technology Nomura is indeed looking ahead, with a focus on artificial intelligence. In February, for example, Nomura took a stake in an AI trading venture established by hedge fund management company Brevan Howard.

But almost everything comes down to implementation. If the last 10 days are any guide, investors doubt Nagai's plan will work better than 2012's. Nomura is Japan's No. 1 brokerage. It is time it lived up to the role.