Cost-cutting is not enough to vault Nomura back into the global finance game.   © Reuters
CopyCopied

If any Japan Inc. icon dramatizes the difficulty the nation's top names have thriving overseas, it is investment bank Nomura Holdings.

Three times over four decades, the giant has sought to grow abroad, but these efforts ended in disappointment. Fallout from the most recent foray, which included an ill-advised bet on bankrupt competitor Lehman Brothers' assets, dominated the final years of outgoing CEO Koji Nagai's tenure.

It now falls to Kentaro Okuda, whose appointment was announced this week, to make it fourth time lucky for Japan's most outward-looking bank. Yet success may be even harder this time around.

By many metrics, Nagai leaves Nomura better off than the staggering institution he inherited in 2012. The insider-trading scandal that undid predecessor Kenichi Watanabe came atop the Lehman-related trauma roiling the bank's performance.

Sure, grabbing Lehman's Asian and European businesses on the cheap in 2008 propelled Nomura into the global top tier and seemed a good idea at the time. But it did not take long for Watanabe's team to realize that taking the freewheeling and overpaid Lehman crowd into the fold was the financial equivalent of downloading a computer virus.

Executives from Nomura celebrate the completion of their acquisition of Lehman Brothers European operation in London in October 2008: grabbing Lehman's businesses on the cheap seemed a good idea at the time.   © Reuters

Nagai's time at the controls, it follows, was spent debugging past mistakes, and he unleashed waves of aggressive cost-cutting. The latest -- a $1.3 billion pruning announced in April -- trimmed domestic retail branches by 20% and shook up the top management structure.

This helped to produce Nomura's strongest quarterly profit in more than 17 years at the end of October, following the first annual loss in a decade last year.

But cost-cutting is not enough to vault Nomura back into the global finance game. Before it can truly succeed abroad, Nomura needs to change its culture at home -- a task Nagai neglected. Nagai, remember, nearly lost his job earlier this year amid another scandal.

Earlier this year, Japan's leading brokerage was accused of leaking sensitive nonpublic data to clients. It was a reminder that, for all Nomura's efforts to internationalize practices, too many of the old tactics remain. It also was another blow to Prime Minister Shinzo Abe's push to raise Japan Inc.'s governance game.

Since 2012, the year Nagai took over, Abe has been trying to extricate Japan from the insularity that limits its global footprint. Japan may be an international manufacturing heavyweight, but in financial circles it is a featherweight at best. For this, Nomura's foibles are as good a case study as any.

For starters, replacing Nagai with yet another Nomura veteran seems a recipe for short-term fixes, not big-picture cultural shifts. On the surface, Okuda cuts the profile Nomura wants to project. He's youthful at 56, and with a Wharton School business degree and experience heading Nomura's U.S. operations he seems a solid on-paper choice. 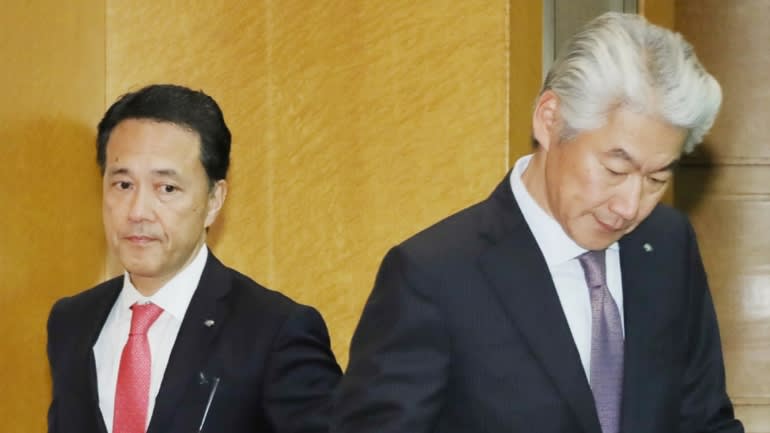 Kentaro Okuda, left, will take over as CEO of Nomura Holdings on April 1, succeeding Koji Nagai, right, who will become chairman: disruption is something the investment bank desperately needs. (Photo by Yuki Nakao)

Better might have been bringing in an outsider rather than someone who has worked his way up the Nomura ladder since 1987. Someone steeped in a corporate culture seems an unlikely force to disrupt it, and disruption is something Nomura desperately needs -- and the rest of Japan's top brokerages too. The same goes for keeping Nagai in the loop as board chairman.

Like its domestic rivals, Nomura is infamous for Tokyo-centric control that prioritizes process over shareholder value and a debilitating aversion to risk. This chronic distaste for bold restructuring was a feature of Watanabe's 2008-12 tenure, as well as Nagai's.

Again, cost-cutting has its place, but so does a clear vision for why clients from New York to London should choose Nomura over Goldman Sachs, Credit Suisse or Barclays.

Or, for that matter, what Okuda's team can do for clients in China. Over time, as mainland companies rely more on capital-market-based financing rather than government loans, shareholders will expect Nomura to win its fair share of business. The same goes for trading -- and winning underwriting deals -- in China's rapidly-developing $13 trillion onshore debt market.

Doing so requires internalizing the lessons of recent decades. In other words, translating domestic success into international market share. This goes, too, for executives at Sumitomo Mitsui, Mitsubishi UFJ and Mizuho Financial.

The weakness that Japan's megabanks display is a handicap to performance back home, where an aging, shrinking population leaves less business to go around. It hardly helps that negligible interest rates limit net income, or that the trade war has investors and multinational companies in risk-off mode.

To thrive overseas, Nomura and peers must drop their excessive risk aversion at odds with global success. The industry must loosen up on a preference for centralized, consensus-based, process-heavy decision-making. It must stop rotating top executives into new roles around the globe every few years, a practice that reduces expertise in regional markets.

It is also high time to rethink Japan's seniority-based promotion system, one that continues to churn out Nomura CEOs. Who knows, Okuda could indeed be the right leader at the right moment. His time in the U.S., for example, may have imparted insights that he can now apply at the home office.

At least one thing is clear, though: Nomura's true repair job is just beginning.