Nordic nations can stand up to China in the Arctic

Beijing and Moscow haven't always seen eye to eye. But, assisted by U.S. President Donald Trump's belligerence, they are putting aside old suspicions and finding new opportunities for cooperation.

The vast expanse of the Arctic Ocean is a case in point. Among the most significant practical achievements of Chinese President Xi Jinping's visit to Russia this month was the launch of a joint venture to build a fleet of ice-breaking tankers. The signatories involved the Chinese shipping conglomerate Cosco; a Russian counterpart, Sovcomflot; Novatek, a Russian energy group; and Beijing's Silk Road Fund.

Melting ice, opening trade routes and mounting territorial claims are turning a once-neglected region into a zone of intense interest to the world's great powers with the U.S. openly describing the Arctic as an arena of global competition.

A strengthening Russia-China Arctic alliance brings together Moscow's control of much of the coastline and China's economic might and its determination to expand supply chains and influence across the polar north.

At first glance, this combination might seem to have overwhelming power, giving the two authoritarian giants the whip hand in the region over the democratic governments of North America and Europe. But all is not lost from the Western point of view: Five small European Nordic nations -- Denmark, Iceland, Finland, Norway and Sweden -- hold a key to how things unfold. If they play their cards well, they could yet devise new ways of responding to China's rise.

There is no doubt that Washington is worried. The Pentagon in June released an updated paper on its Arctic strategy that focused on the threat posed by Moscow and Beijing, describing their partnership as "the principal challenge to long-term U.S. security and prosperity."

A month earlier, Secretary of State Mike Pompeo used a summit of the eight-member Arctic Council (which consists of the Nordic nations, Canada, the U.S. and Russia) to accuse Beijing of aggressive behavior there and asked delegates: "Do we want the Arctic Ocean to transform into a new South China Sea, fraught with militarization and competing territorial claims?"

Pompeo was right to flag up a warning, but the Arctic is a slow burner with estimates varying on the viability of the new northern trade routes. By 2050, new sea lanes could cut journey times from east Asia to Europe by 40% over the traditional passage through the Suez Canal, although they may only be open for six months of the year.

While Russia and China share a primary goal to develop energy resources, China has a dual mission to secure alternative supply chains to and from Europe. To achieve this, it needs not only a good relationship with Russia but also with the European Union and the five Arctic Nordic governments.

But it faces growing opposition. In March, the EU formally declared Beijing a "strategic rival" after concluding that massive Chinese investment in Europe needed closer scrutiny in areas ranging from critical infrastructure to political interference.

Therefore, if its long-term Arctic strategy is to work, China will need to rethink its approach.

It has suggested creating a special economic grouping, the Five plus One, comprising China and the five Nordic countries. But this has had a frosty reception. European officials are worried about the precedents set by an earlier European grouping set up by Beijing in 2012, called the Sixteen plus One, made up of 16 poorer central and eastern European countries.

Not only are these governments now enveloped in China's infrastructure-building Belt and Road Initiative, but they have also become vocal in challenging common EU China policies, not least on human rights. For example, in 2017 Hungary refused to sign a joint letter denouncing the reported torture of detained lawyers in China.

Europe's establishment has concluded that China's creation of sub-regional groups with direct lines to Beijing risks weakening its institutions, and all the five Nordic nations are either members of NATO, the EU or both. 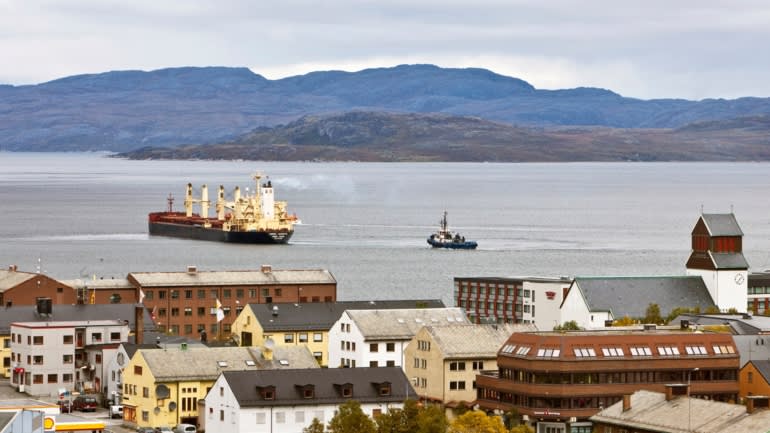 The Norwegian town of Kirkenes, pictured in September 2010, has a port close to Russia slated to become a trade hub.   © Reuters

We may get early signs of how China's Arctic plan for Europe could advance from the small northern Norwegian town of Kirkenes, a port close to Russia slated to become a trade hub.

Kirkenes' position is important because the Norway-Russian border marks the border with NATO and with the Schengen zone, which allows passport-free access among more than 20 European countries.

Kirkenes is remote. For trade routes to be developed fully, the port needs expansion and the construction of a costly 290-mile rail connection with Rovaniemi in Finland, which is linked to the main European network.

China would like to be involved, but that would draw the Nordic countries into the BRI and potentially expose them to Beijing's political influence.

These rich countries do need Chinese money as much as less developed east European states. If they want Asian investment, they can always go to the big maritime nations of Japan and South Korea, which share democratic values.

So, if Beijing is to achieve the access it seeks, it would need to think again about its much-cited mantra that China is a big country and all others are smaller and that the world needs to get used to this unassailable truth.

Unlike the Southeast Asian nations that Beijing has bypassed in its South China Sea claims, the five Nordic countries are wealthy, strong, well-governed and independent-minded. There is little risk of any Nordic nation becoming a European version of Laos or Cambodia seen by some analysts as little more than vassal states.

These are also societies that have shown a willingness to punch above their weight when defending thorny human rights issues as well as their own defense interests.

Three years ago, Denmark banned China from buying an old military base in Greenland, where foreign policy is Danish-controlled, because it would have given Beijing an Atlantic foothold. And Norway stood up to a long diplomatic freeze from Beijing after its non-government Nobel Committee awarded the 2010 peace prize to Chinese dissident Liu Xiaobo. The freeze ended only in 2016 precisely when China began formulating its Arctic policy.

China's 1.4 billion population is 51 times bigger than the Nordic nations' combined 27 million. The alliance with Russia strengthens its influence in the Arctic considerably. Yet, Beijing still finds itself in a situation where it needs small countries more than they need it.

China's determination to secure European access via the Arctic may end up showing us how small countries with strong, uncorrupt governments can stand up to Beijing, resist the temptations of cheap money and moderate China's expansive ambitions.

Humphrey Hawksley is a former BBC Asia Correspondent. His latest book is Asian Waters: The Struggle over the South China Sea and the Strategy of Chinese Expansion.