Two women walk on an unusually empty street in Kyoto on Jan. 13: we must have the courage to recognize that old-fashioned tourism is over.   © Kyodo
CopyCopied

The current crisis has brought a large part of the world's travel industry to a halt, and the sector is slowly starting to wake up.

As in all sectors, many of those who work in it dream of a return to the world as it was: the same crowds, the same cheap plane fares, the same travelers coming from far and wide to crowd into their homes, the same visitors crammed into restaurants, museums, stadiums and theaters.

And yet, should we not also take into account the lessons of the current crisis in order to not forget it before its consequences are felt even more terribly?

The current crisis teaches us, in particular, that travel of all kinds -- especially international travel -- will have to be infinitely more regulated in order to avoid the spread of pandemics in the long term, to reduce the consumption of fossil fuels and to avoid harming the protection of our heritage and natural areas.

For example, it would be reasonable not to increase business travel, not to pile up in low-cost planes, not to see any more low-cost housing on the sea in the Venetian lagoon, nor millions of tourists on Thai beaches or in the streets and temples of Kyoto.

Coming from Asia or America to Europe will therefore become more difficult. Conversely, coming to Asia from the rest of the world, for the simple pleasure of tourism, will necessarily be limited.

And if we do not admit it, all that we will have gained by more reasonable behavior will be lost by this kind of drift. More generally, there is no point in fighting global warming with one hand if we continue to make it worse with the other.

Even if many people will refuse to admit it for a long time to come, we must have the courage to recognize that old-fashioned tourism is over. And all countries -- especially Japan, for which it is very important -- will have to take this into account.

Many countries and companies in the travel and tourism sectors have begun to understand this. And behavior will change, one way or another.

Some countries or cities will assume that tourism is reserved for the richest people, who will be able to pay high prices for plane tickets and afford the limited -- and therefore expensive -- number of hotel rooms offered by countries or cities that want to protect their heritage and reserve it for the rich. Others, more democratic, will set up lottery systems or quotas to define the number of people who can visit each year.

The tiny kingdom of Bhutan seems to have chosen the first strategy. In France, the Louvre will choose the second; this will eventually have an impact on the growth of the number of foreign tourists in Paris and even in France.

For the moment, Asian countries do not seem to have chosen yet. Except that China is starting to build replicas of European sites, to show them to their tourists, thus reducing the trips to domestic cities. And again, they will either have to be reserved for random people, or for very rich people. All in all, if it does not change, tourism will in the future be reserved for those who are served by fortune: that of money or that of fate.

Finally, others will understand that the future of the tourism industry is no longer in the growth of the number of visitors, as it was conceived until now, massive and anonymous, but in the considerable improvement of its impact on the environment and on nature.

Many hotel companies already understand this and are beginning to totally revise their real estate holdings and practices in order to reduce their ecological impact. This will be extended to other sectors of activity of a particular dimension of tourism, which certain cities and certain companies have always practiced: hospitality. That is to say, around everything that goes from welcoming, to attention, to empathy, to helping the well-being of those we receive.

Hospitality is not just about natural gifts. As Japanese culture so wonderfully demonstrates, hospitality requires very specific techniques, often refined over thousands of years, which will soon be needed in many other fields than tourism, and which could open up new perspectives for this threatened industry. 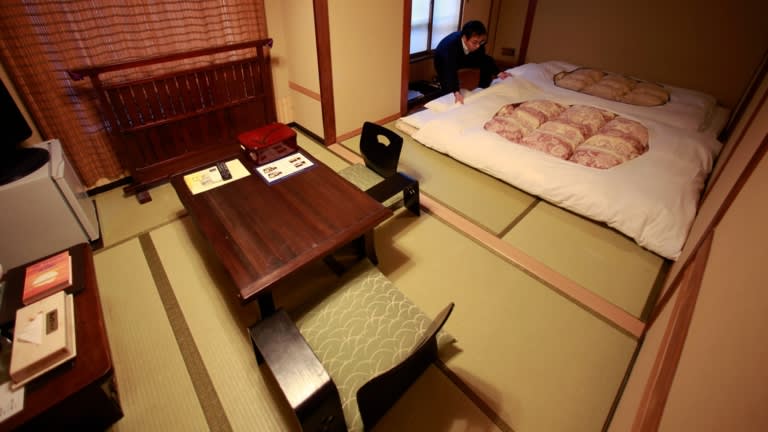 A manager of a hotel in Tokyo set up futons on tatami mats: hospitality requires very specific techniques, often refined over thousands of years.   © AP

For example, corporate headquarters and hospitals would have much to gain from using such hospitality skills. Companies may find ways to retain their employees, who are increasingly distanced by teleworking. Here, the quality of the welcome at the workplace will play an important role in the loyalty to a company. Head offices will have to offer employees a very warm welcome, showing the employer's respect for their staff and doing everything to make them want to work there.

Hospitals all over the world could also do a better job of improving their hotel dimension by making even greater use than some of them already do of specific hotel-like skills, both for patients and nursing staff as well as for accompanying families.

And we know how important the quality of the reception area, and the hotel dimension of a place of care, is when it comes to treatment. To this, we could add the huge future market for dependency in aging countries, which is already the case in Japan and will soon be the case in China, Europe and the rest of the world.