A banner of Tokyo 2020 Olympic Games, pictured on May 13: Japan is stuck in stop-go-stop mode.   © AP
CopyCopied

When the health of Japan's 126 million people falls to the nation's CEOs, you know you are in serious trouble.

SoftBank founder Masayoshi Son, Japan's richest man, is "afraid" as Tokyo gambles it can safely welcome 90,000 visitors from all over the world during a pandemic. And what a wacky gamble: that it is fine to open your doors to folks from places suffering third or fourth waves of infection, pouring into a densely populated city where vaccinations trail Bangladesh and new COVID variants are ready to party.

Gee, what could go wrong? Even top Olympics sponsor Toyota Motor admits it is "concerned" about the level of public anger over the event. More than 80% of Japanese oppose holding the Tokyo Games in July. Anti-Olympics protests and online petitions are making their own headlines.

The juxtaposition here is plenty fascinating. Japan's corporate bosses are notorious for taking their cues from on-high. This time, CEOs are taking the lead as Prime Minister Yoshihide Suga goes AWOL. Japan's leader since September often seems more hikikomori, or recluse, than hands-on.

Suga is not known to tweet or bully the masses. He is, however, the second Japanese leader in a row reading from Donald Trump's COVID-19 playbook: spin, deflect, downplay, worry more about this quarter's gross domestic product than the gross negligence of holding a ginormous in-person sporting event during a pandemic.

Even the gang over at the World Economic Forum get that the coronavirus is running an ultramarathon, not a 100-yard dash. This week, WEF finally bowed to epidemiological reality and pulled the plug on plans for an in-person Davos jamboree in Singapore this August. It was always a crazy idea.

What does it say, though, that a group so lacking in self-awareness is leading on public health, while Suga's Liberal Democratic Party looks the other way? Never mind that Suga's approval rating is now 33%. Or that the LDP's prioritize-economic-interests play is flopping.

GDP plunged an annualized 5.1% between January and March. And while the rest of the globe panics about inflation, Japanese prices are veering back toward deflation.

So, what does Suga's LDP have as 2021 approaches the halfway mark? The specter of a double-dip recession, for one. That, as China bursts ahead and post-President Trump America gets a second wind. The LDP has the dubious honor of hosting an event history may recall as the "Pandemic Olympics" in ways that tarnish the Japan brand. It also has zero arguments to stay in power come October.

Suffice it to say, 2021 is not going the way Suga and his political mentor Shinzo Abe envisioned.

Both men figured the occasional state of emergency would tame COVID-19 -- and rid them of the need to build credible testing and contact-tracing protocols. And, as we Tokyoites have since learned, there is not much of a vaccination program. When you are running at the same pace with Myanmar -- a failed state -- in putting shots in arms 64 days out from the Olympics opening ceremony, it is time to cancel.

The real problem with Mikitani's "suicide mission" taunt is that the man is 100% right. We know the LDP does not want responsibility for canceling the Games. Yes, tens of billions of dollars hang in the balance. Sure, the LDP loathes the idea Beijing may be 105 days away from basking in Winter Olympic glory -- assuming COVID-19 or boycotts do not interfere. 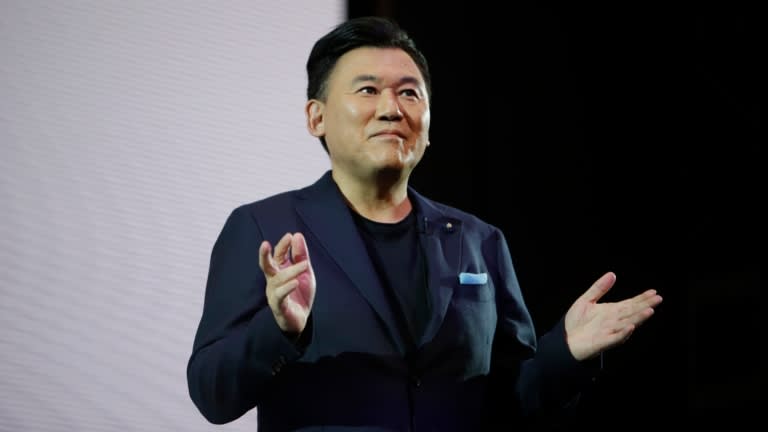 Hiroshi Mikitani, pictured in October 2019: the real problem with his suicide mission taunt is that the man is 100% right.   © AP

But what about economic suicide? As I have argued before, Abe had nearly eight years in power to get Japan into shape. With rare majorities in both houses of parliament, he had plenty of juice to loosen labor markets, tweak regulations and tax laws to create more tech unicorns, empower women and break through the chronic bureaucracy now hobbling the vaccination game. Instead, most of Abe's energy went into the Olympics.

This opportunity cost of eight squandered years far exceeds funds wasted on Olympic facilities that might not be used. As China, the U.S. and parts of Europe vaccinate enough people to reopen economies, Japan is stuck in stop-go-stop mode. And not just with COVID, but in engineering a stable GDP path to fatten paychecks and restore Japan's innovative mojo.

As Japan's economy loses steam again, it is clear the tradeoff between GDP and public health is not working as hoped. Japan has too little growth on the economic side and too much in terms of COVID-19 infections and public discontent.

Ironically, the one area many give Abe and Suga -- Abe's top lieutenant -- credit was corporate governance reform. They prodded CEOs to give shareholders a bigger voice and internationalize operations.

Now, the Abe-Suga crowd is aghast to hear such newly empowered CEOs call their bluff. And lash out at a dearth of leadership as nearly 100,000 people, many unvaccinated, prepare to head this way for a giant super-spreader fiasco that should not happen.