As workers embrace a virtual approach, changes are here to stay 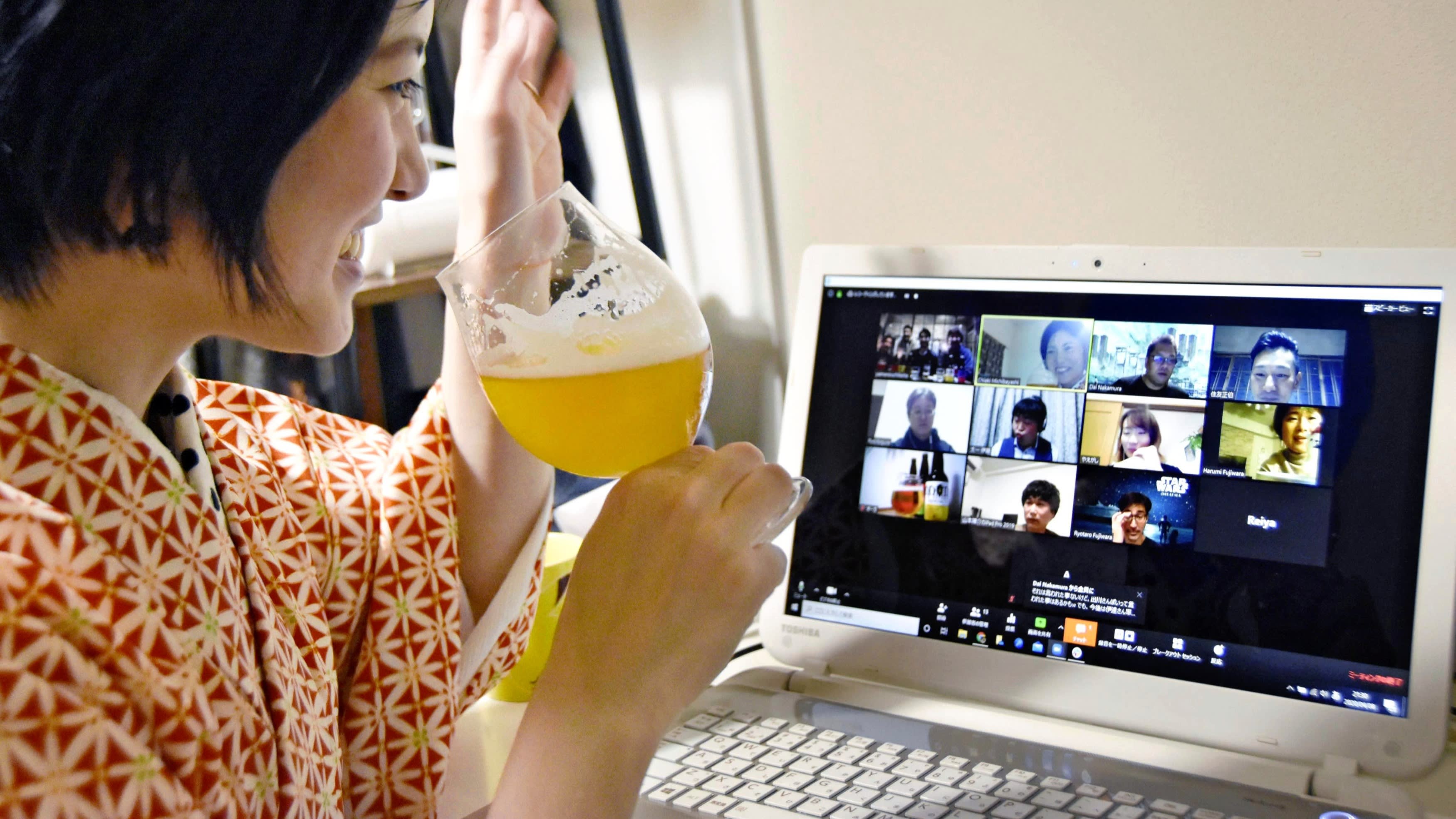 A woman takes part in an online drinking session from her home on Apr. 8: younger staff applaud their freedom from the social protocol of having to pour drinks for their bosses.   © Kyodo
CopyCopied

Two months ago, when some of Japan's largest companies had instituted working from home, not every company was coping well with remote working.

One of the largest Japanese trading houses was fighting to maintain the laborious administrative process it had developed in its physical office. Packages of documents bounced from one executive's residence to another by post, each step in their progress acknowledged by the ink stamp of the hanko, an individual's seal.

Until the company gave up. With three months of muddling through virtual operation under its belt, the company has finally replaced the hanko-on-paper approval process with a chain of email. One executive at this company I spoke to recently solemnly acknowledged the death of hanko culture.

The hanko's exit from the scene was long overdue. In fact, the company always had a digital signoff mechanism built into its systems, but the management had decided not to turn it on to honor the custom of approval by hanko.

The strength of tradition and inertia in Japan is such that honoring customs often takes priority over greater efficiency. But the pandemic has fundamentally challenged this belief as it has overhauled assumptions about our work environment and the best processes. Now I hope that how Japan Inc. operates will finally take a significant step toward modernization. The hanko's exit from the scene is long overdue.

Remote work, suddenly emerging as mainstream, sent a shock wave beyond the hanko debacle. Pre-COVID-19, many Japanese employers were reluctant to embrace telework because of management challenges they expected. Not being on the same floor, how would you know if your team members worked excessive overtime or, worse, slacked off? Would they not feel isolated from their colleagues?

Forced into remote work under soft lockdown, however, many teams have successfully adapted, often surprising even themselves. High-performing teams hold regular morning and evening video calls. Working parents appreciate being able to stay home with their kids while the schools are closed. A manager noted that the overtime record, which spiked in the first weeks, quickly tapered off as leaders started to pay attention and employees adjusted. A man works as his son plays the piano at their house on Mar. 4: working parents appreciate being able to stay home with their kids while the schools are closed.   © Reuters

Moreover, people are discovering an unexpected upside. A colleague of mine acknowledged that remote work enforced clear role division, raising team productivity, in contrast with the traditionally nebulous roles within Japanese companies.

While remote work does not replicate the joy of physical proximity with our co-workers, we are starting to realize that it is a viable alternative.

The experience highlighted a lack of trust within businesses, but it has also awakened us from these deep-seated ideas we collectively harbored. Not only is working from home a defiance against tradition, it is a self-revelation. Virtual signoff is as real as hanko. Most people can be trusted to work remotely and discipline themselves.

We are now questioning long-standing customs outside immediate work. As shelter-in-place grew longer, employees started to recreate after-five drinks with teleconferencing tools, which came to be globally popularized as "Zoom soirees" or, in Japan, "virtual nomikai." In Japan, where workplace camaraderie is fostered to a great extent by social drinking with colleagues, its shift to online venues has a serious implication.

While the phenomenon is an existential blow to the restaurant and bar business, workers have positively received the change. Younger staff quietly applaud their freedom from the social protocol of having to pour drinks for their bosses. No more keeping a watchful eye on their glasses crying out for a refill. Now it is do-it-yourself, for bosses as well as entry-level salarymen. It is a democratization of social events, breaking free from the rigid hierarchy and mandatory omotenashi, renowned Japanese hospitality, of corporate life here.

We win some and we lose some. Even the hanko ritual carried a nuance of communication which will be lost with digital signatures. The seal stamped intentionally askew signaled the quiet discontent of the approver. It was a form of subtle protest while falling in line. In the post-COVID work culture where the hanko is no longer the norm, managers will need to learn to vocalize their opinion, sometimes over web cameras.

Japan Inc. has long been criticized for its arcane, hierarchical white-collar workstyle favoring paper and the physical over the virtual. Spending a long time at the office won praise, with little regard to performance. These traits are often blamed as culprits for Japan's low productivity relative to other developed economies.

Old habits were so hard to shake off because their mentality is implicitly associated with the Japanese economic ascent of the 1980s. Indeed, even though the technology is available, organizational memory prevented us from taking full advantage of it.

As we taste the upside of the new normal, however, remote work and the digitalization of protocol will not be temporary emergency measures but are likely to stay. Now we have to ask ourselves why we did not do this sooner. It only took a pandemic.