PayPay's path to a $14bn valuation

Japan can create large-scale domestic internet unicorns after all A customer uses his mobile phone to pay via a QR code with the PayPay app at a store in Tokyo: the amount of information available about the valuation of the mobile payment app is limited. (Photo by Arisa Moriyama)
CopyCopied

David Gibson, CFA, is chief investment adviser at Astris Advisory Japan. He specializes in the game and internet sectors.

Japanese mobile payment app PayPay is heading toward an initial public offering that could see its valuation soar beyond investors' wildest expectations. Speculation about its potential to become a unicorn -- a $1 billion company -- is well off the mark: It could well be worth more than 10 times that.

Buried in SoftBank's 2020-21 annual report is the revelation that PayPay was valued at $3.4 billion in March 2020. That assumption is based on an analysis of the corporate structure and the issuance of preference shares. SoftBank calls the shots on PayPay via a controlling interest through a complex ownership structure that includes SoftBank Group, SoftBank Corp. and Z Holdings.

Given the massive scale of a PayPay IPO and the involvement of leading Japanese and foreign financial institutions, the amount of information available about the valuation of the widely used app is limited. SoftBank Corp. CEO Junichi Miyakawa says the IPO is not "too far out" but has yet to announce a specific time frame for PayPay to become an independent company.

Originally formed by SoftBank Corp. and Yahoo Japan which is now part of Z Holdings, in June 2018, SoftBank Group bought a 50% stake in PayPay in May the following year for 46 billion yen ($442 million), valuing the business at 92 billion yen at the time.

A deep dive into the 2020-21 SoftBank Corp. annual report shows that in March 2020, Yahoo Japan, together with SoftBank Corp., injected a further 70 billion yen in preference shares -- probably around 20% of the company -- and valuing PayPay at $3.4 billion. 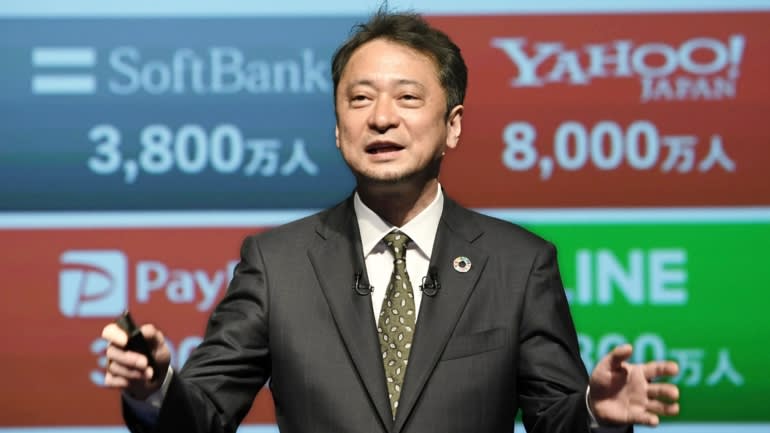 Junichi Miyakawa speaks during a presentation of company results on May 11: SoftBank Corp. CEO says the IPO is not "too far out" but has yet to announce a specific time frame. (Photo by Tetsuya Kitayama)

After Indian digital payments startup Paytm provided the technology for PayPay -- Yahoo Japan scrapped development plans for its own QR code app -- in September 2020, Paytm had a change of heart and wanted to buy into PayPay, possibly realizing it had helped drive Japan's next unicorn with little benefit beyond a tech license fee, and was granted options on 8% of PayPay at a price likely higher than the March 2020 valuation.

At SoftBank Corp.'s results presentation in May, the company confirmed that after the conversion of its preferred stock and options exercise it would own 64% of PayPay, which would become a consolidated subsidiary.

It is worth noting that for the Japanese fiscal year ending in March 2021, PayPay reported sales of 30 billion yen on a 0.94% take rate -- the fee charged per transaction. While that fee include some charges, merchants still enjoy zero settlement fees as part of a promotion due to expire in October. With 73 billion yen in operating losses, turnover was up 167% for the year.

As of March, PayPay had 38 million registered users, with around 15 million, or 40%, active each month, suggesting the average active PayPay user only used the app two or three times per week, leaving ample room for growth.

With competing services including Suica, Rakuten Pay and credit cards normally charging around 2%-5% per transaction, PayPay could follow the Alipay low-fee playbook and set historically low system usage fees in Japan at 1% to ensure it becomes the default cashless app in Japan, favored by both merchants and consumers.

Based on a 1% system usage fee, PayPay could hit 100 billion yen in revenues during the fiscal year ending March 2023 and profitable in the year after. That means that valuing the company based on 15 times that revenue figure, PayPay would be worth around $14 billion -- a huge unicorn.

If PayPay went with a 0.5% take rate the business could be valued at $10 billion, and $21 billon if it charged 2%. Risk-adjusted between the scenarios arrives at a valuation of $14 billion. A potential Paytm IPO in India is likely to confirm high valuations for payment leaders like PayPay

A point of interest is that Yahoo Japan owns the license for the use of the PayPay name and hence will receive a small ongoing fee for usage. Plans are underway to expand PayPay into a superapp with a range of financial services, a similar model to Ant Group's Alipay.

SoftBank Corp. has flagged that its placement agent, SB Payment Service, could also be considered for an IPO. It is currently 100% owned by SoftBank Corp. The business reported 16.1 billion yen in sales and 6.9 billion yen operating profit on 3.5 trillion yen turnover in the fiscal year ended March 2020, with a take rate of 0.5%.

During the fiscal year ended March 2021, turnover expanded by 14% to 4 trillion yen. SB Payment Service manages the distribution of merchant fees that apply to credit card and cashless transactions. It is a comparable business to GMO Payment Gateway and Digital Garage.

To value SB Payment Service by comparing it with a 30% discount to GMO given the lower growth -- 14%, versus GMO at 27% -- indicates it could be valued at $3 billion. That represents 13 to 14 times the sales forecasts for the fiscal year ending March 2023.

The IPOs of PayPay and SB Payment Service have the potential to realize more than $17 billion in valuation for the SoftBank Group of companies and demonstrate that Japan can create large-scale domestic internet unicorns -- and impress investors with their scale.