Philippines-China -- after the rainbow, more rain 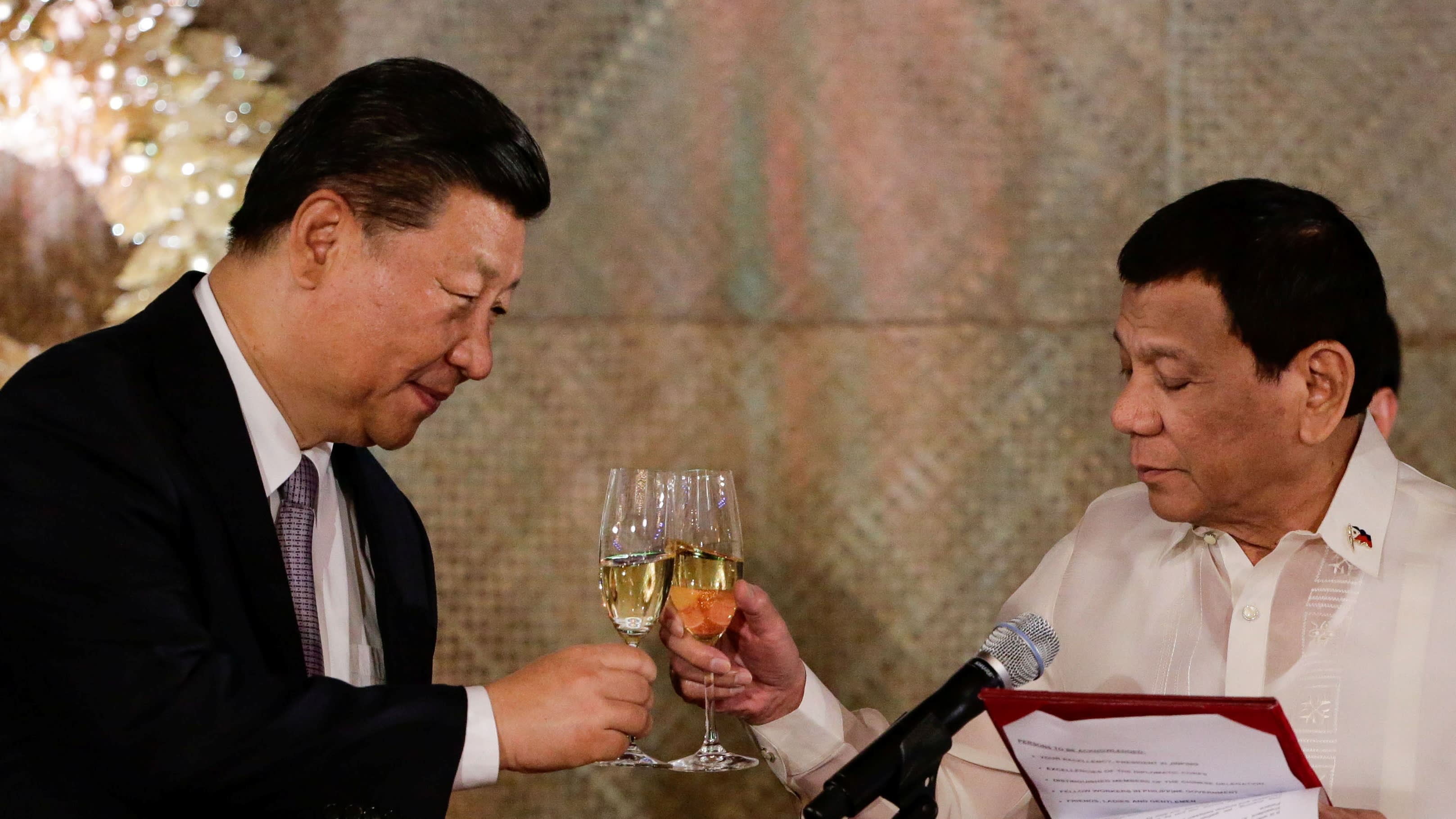 Chinese President Xi Jinping's recent trip to the Philippines should have left his hosts basking in the glow of reflected glory, the warmth of friendship and the satisfaction of opening up some big economic presents.

But the Chinese leader's Nov. 20-21 visit produced no such sentiments. Despite the heady announcement of turning bilateral ties into "strategic partnership," there was no progress on the key difficulties dividing Manila and Beijing, headed by the maritime disputes and a growing backlog in China's ambitious economic support pledges.

Instead of applause for Xi, there is a backlash against the relationship, with prominent statesmen warning against any large-scale entry of Chinese workers and investments as well as opposing any major compromise in the South China Sea.

Two prominent senators, Antonio Trillanes IV and Francis Pangilinan, warned the government against signing "any agreement with China or any other state which diminishes the Philippines' exclusive [maritime] rights."

Antonio Carpio, a senior judge who was recently acting chief justice, lashed out at China's creeping maritime presence in Philippine waters as the "gravest external threat since World War II." And Vice President Leni Robredo, an opposition politician, demanded "transparency" in bilateral deals and raised doubts over their merits, saying: "What benefits do we get? And what are we obligated to do [in return]?"

The criticisms raise questions about the China-Philippines relations and Beijing's broader efforts to expand its influence in Southeast Asia. If a visit by China's leader, the first in 13 years, produces such a reaction, what are the prospects for Chinese leadership in the region?

It is all a far cry from the mood President Rodrigo Duterte tried to create before Xi's arrival. The Philippine leader had spent two years trying to reorient his country toward Beijing and away from its traditional allies in Washington, revitalizing bilateral economic ties and downplaying awkward maritime disputes. Shortly ahead of his visit, Xi even penned an op-ed for Xinhua, where he declared relations with Manila had "now seen a rainbow after the rain."

There were even hopes that Xi's visit would bring a joint exploration agreement in the disputed zone of the South China Sea, a prelude to resource sharing in other areas of overlapping claims. Yet, the two countries signed only a generic memorandum of understanding (MOU) on oil and gas cooperation, which, according to Philippine Energy Secretary Alfonso Cusi, was "just a cooperation [deal] to explore solutions" on "how we can enjoy the resources" in the South China Sea.

The failure to break the impasse was likely due to fear of political backlash in the Philippines, where large numbers are opposed to any resource-sharing agreement with China. The most recent survey by Social Weather Stations shows that four out of five Filipinos want the government to take a tougher stance against China over the South China Sea.

Justice Carpio warned the government against signing any "joint exploration, development and exploitation" agreement with Beijing, since "the constitution says the state shall have full control and supervision in the exploration and development of our natural resources."

And in a sign that even the government is divided, Foreign Secretary Teddy Locsin made it clear that he pushed back against "forces" in the administration that favored a compromise with Beijing.

Meanwhile, the Philippine military, which remains deeply skeptical of China's intentions, reportedly rejected a Chinese proposal for a Maritime and Air Liaison Mechanism to coordinate military movements in the contested Spratly chain of islands. Given that the country's security establishment has long resisted Duterte's efforts to dilute military ties with the U.S., Manila's key long-standing defense partner, this should hardly have been a surprise. The wonder is that the plan got this far.

There is also growing frustration in Manila over lack of progress in China's pledge of $9 billion in infrastructure investments -- perhaps the single most important benefit that Duterte has hoped to extract from Beijing. Out of 10 proposed projects, so far only one, the Chico River Pump Irrigation Project worth around $60 million, has passed the preliminary phase.

Ahead of Xi's visit, the Philippine budget secretary openly complained about the backlog, urging the Chinese leader to "put pressure on the speed of implementation of all these projects." Yet, among the 29 deals signed during Xi's visit, the vast majority were simply MOUs, letters and framework agreements on already identified projects.

Only two, implementation agreements on feasibility studies for the Panay-Guimaras-Negros Island Bridges Project and the Davao City Expressway Project, represented some concrete progress.

Ahead of midterm elections in the Philippines next year, prominent statesmen, including Duterte's allies, seem intent on tapping into public skepticism toward rapprochement with China.

Senator Joel Villanueva, chairman of the Committee on Labor and a Duterte administration ally, held a hearing on Nov. 26, where he underscored the "dire need to strengthen legislation and enforcement to stop illegal online gambling and proliferation of illegal Chinese workers that shamelessly robbed our own people of jobs."

Senator Grace Poe, a leading independent legislator, called for crackdown on inflow of illegal Chinese workers, many of whom work in online casinos. The government "should go to these sites and check their permit, because this is a national security issue," Poe said.

The senator, who also heads the Committee on Public Works, held a separate hearing on Nov. 27, where she questioned the potential entry of state-run China Telecom, as part of a Philippine-Chinese consortium, which last month provisionally won a mobile telecoms license in a controversial bidding process.

She questioned the transparency of procedures and cited possible security threats. The hearing, combined with public skepticism and legal challenges by losing bidders, will likely delay, if not derail, the bid.

Xi's brief sojourn in Manila did little to ease these concerns. More than two years into Duterte's strategic flirtation with China, the two countries are yet to strike any major deal. Domestic opposition, in the elite as well as the public at large, has put into question the whole approach.

Worse for Beijing, developments in the Philippines mirror discontent with China's efforts to spread its influence, especially through investments under the vast Belt and Road Initiative. From Malaysia to the Maldives, and Pakistan to Papua New Guinea there is growing discontent over China's overbearing influence. If Xi can't be sure of a warm welcome in Manila, the supposed crown jewel of his regional diplomatic strategy, can he be sure of one elsewhere in the region?