Duterte lashed out at Facebook's latest crackdown for supposedly "promoting the cause of the rebellion."    © Malacanang Presidential Photographers Division/AP
CopyCopied

Throughout the years, Facebook has served as the unwitting enabler of populists and right-wing elements across the world. The social media company has provided a free-for-all platform that has become synonymous with disinformation and discord, empowering fringe and anti-establishment figures in troubled democracies.

No less than Philippine President Rodrigo Duterte has been among the biggest beneficiaries of Facebook, which is available for free to tens of millions of mobile subscribers in the Southeast Asian country. But as the California-based tech company cracks down on disinformation networks ahead of the U.S. presidential election, the undeclared alliance with reactionary populists has taken an ugly turn.

This week, Duterte -- the Philippines' most notorious populist -- openly accused Facebook of "censorship," threatening decisive action after the company announced that it had shut down dozens of allegedly state-sponsored accounts engaged in "coordinated inauthentic behavior."

The latest crackdown also exposed a further troubling development. Namely, the advent of China-backed disinformation networks in the Philippines, underscoring the threat of "sharp power" operations by foreign powers ahead of the Southeast Asian country's own presidential elections in 2022.

It is impossible to overstate Facebook's importance in the developing world, where access to the wider internet and cable television is often prohibitively expensive. In the Philippines, the social media giant has become the ultimate virtual public square, acting as a primary source of news, commentary, and information.

In effect, Facebook has become the biggest and most profitable publisher in the Philippines, but without the corresponding editorial responsibilities for content and its viral dissemination that applies to traditional media. As a result, the social media platform has become a magnet for a range of political hacks and unsavory advertisers.

One authoritative Oxford University study in 2017 showed that Duterte's 2016 presidential campaign spent up to $200,000 on a state-of-the-art "troll army" organized by former advertising and media executives. Even the notorious Cambridge Analytica consultancy company, which has been accused of manipulative microtargeting of swing voters around the world, was also alleged to have been involved in Duterte's campaign.

Its parent company, Strategic Communications Laboratories, has openly boasted of propping up the "strong, no-nonsense man of action" image of nameless successful candidates after its research showed large chunks of the electorate were "likely to be swayed by qualities such as toughness and decisiveness."

Upon his ascent to power, Duterte leveraged his elaborate network of social media propagandists, some with millions of followers, to denigrate and intimidate mainstream media networks and liberal critics. Among the chief victims of this Facebook-driven offensive have been leading journalists such as Maria Ressa of Rappler news, jailed opposition Senator Leila de Lima -- for what many see as trumped-up drugs charges -- and the liberal-leaning ABS-CBN network, which has been forced off the air. 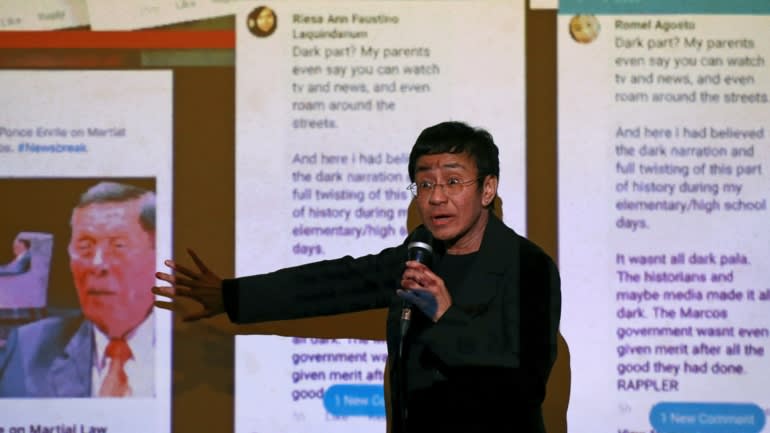 Maria Ressa of Rappler news is one of the victims of the Facebook-driven offensive.   © Reuters

Practically all prominent critics of Duterte's controversial policies -- including myself -- have faced one form of seemingly coordinated online harassment or the other. On several occasions, I had to shut down my social media accounts to avoid the barrage of online attacks, including physical threats. One brazen vexatious litigation attempt forced me to obtain my own legal advice.

In short, social media platforms have been systematically weaponized against independent voices and broader opposition in the Philippines. Under pressure at home and across the world, Facebook has, albeit reluctantly, begun to get its house in order. Back in 2018, Facebook removed more than a hundred "spam networks" in the Philippines, a large number of which spewed out pro-Duterte propaganda and disinformation.

Last week, the social media company upped the ante by targeting dozens of accounts based in the Philippines and China that were engaged in "deceptive methods." According to Nathaniel Gleicher, head of Facebook's Security Policy, "we regularly see these networks using pages that don't fully disclose who's behind them."

As many as 57 personal accounts and 31 public pages on Facebook, as well as 20 Instagram accounts, were suspended for engaging in "coordinated inauthentic behavior." Namely, the systematic deployment of "fake accounts to evade enforcement, post content, comment and manage pages." According to Facebook, the "investigation found links to Philippine military and Philippine police," special units of which were allegedly involved in counterinsurgency propaganda operations against the communist New People's Army.

Vowing to crush the communist insurgency before he steps down from office in 2022, Duterte lashed out at Facebook's latest crackdown for supposedly "promoting the cause of the rebellion," which has led to "thousands of my soldiers and civilians dying."

"If the government cannot use [Facebook] for the good of the people, then we have to talk ...  I don't know what I will do, but we have to talk," Duterte warned the social media company, emphasizing the importance of the security services' counterinsurgency efforts online.

Both the Philippine military and the police have categorically denied Facebook's accusations, maintaining that they have been strictly limited to legitimate and lawful counter-insurgency methods. But what is even more troubling is Facebook's warning against "foreign or government interference, which is coordinated inauthentic behavior conducted on behalf of a foreign or government actor" and "foreign-led efforts to manipulate public debate in another country."

The company's latest crackdown in the Philippines also involved over 150 suspicious accounts based in China, advancing pro-Beijing disinformation on sensitive geopolitical issues such as the South China Sea disputes and Hong Kong; denigrating liberal media personalities and platforms; and support for Sara Duterte's possible candidacy in the 2022 presidential election.

What Facebook's latest crackdown has revealed is the growing threat posed by China's sharp power, which proved particularly decisive in the 2018 elections in Taiwan, and has forced other democracies such as Australia to introduce new laws against foreign influence operations.

In the absence of proactive counter-disinformation efforts by Facebook and host governments, fragile democracies such as the Philippines will be left hopelessly at the mercy of right-wing populists and authoritarian superpowers.