Joe Biden, center, is joined virtually by Scott Morrison, left, and Boris Johnson during his remarks about a national security initiative on Sept. 15: AUKUS should prompt a moment of sober reflection.   © Sipa/AP
CopyCopied

Leaders from the U.S., Japan, India and Australia face an unusual dilemma as they meet for the first in-person summit of the Quadrilateral Security Dialogue, or Quad, in Washington this weekend: how rapidly should their Indo-Pacific grouping now move forward with plans to counter China?

In earlier incarnations, the Quad has tended to move forward only gradually, limited by its own internal divisions. India, in particular, often acted as a brake on more ambitious plans. But now India has turned decisively against China, that brake has at least weakened. The Quad's leaders have a freer hand.

The recent AUKUS pact between the U.S., Australia and the U.K. brings this question about the Quad's direction into sharper focus. AUKUS showed the U.S. and its partners can indeed develop bold new regional security arrangements. Yet this fact should not detract from a second dilemma facing Washington in particular -- namely, how to manage the shifting array of new regional coalitions that form the heart of its geopolitical contest with Beijing, if the U.S. does now choose to move forward more aggressively?

Post-AUKUS, the potential pace of U.S. Indo-Pacific policy looks quite different. The deal matters not only because of the submarines it will eventually deliver to Australia. The signal of resolve it sends, and the military cooperation it may bring in areas linked to emerging technologies, are consequential too. "It is perhaps the most significant capability collaboration anywhere in the world in the past six decades," as Sir Stephen Lovegrove, U.K. National Security Adviser, put it.

Within the Quad, both India and Japan welcomed the pact, raising questions about whether they may also seek tighter military cooperation with the U.S., or indeed whether the Quad might now move to admit countries like the U.K. as members. Even if that does not happen, the existing four have plenty of options. 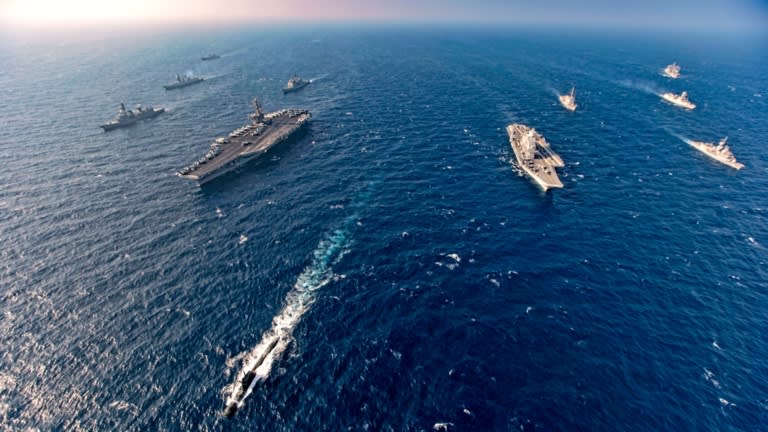 Aircraft carriers and warships participate in a joint exercise comprising of U.S., Japan, India and Australia in the Northern Arabian Sea in November 2020: the four countries have plenty of options.   © Indian Navy/AP

One involves much deeper military cooperation in areas like logistics. This would build on the concept of integrated deterrence pushed by Austin's Pentagon, and used by Austin himself to justify AUKUS. Another involves broadening the Quad's focus, building on forays in areas like vaccine diplomacy to develop serious capabilities in things like infrastructure, disaster relief, or climate assistance.

Technology is an especially important area, as it will be for AUKUS. This weekend the Quad nations are expected to unveil a plan to protect supply chains in semiconductors and other technologies amid worries about a future conflict with China over Taiwan.

Much bolder future tech cooperation is entirely conceivable. The Quad could support nascent U.S. plans to deny China access to advanced semiconductors, or move to share military technologies and codevelop new ones. It could also develop technology side projects under a Quad plus banner, moving to involve countries like the U.K.

Looked at more broadly, AUKUS and the Quad underline the emergence of a new multispeed Asian security environment with many overlapping multilateral and minilateral groupings, all linked in some way to the U.S. as it seeks to deter China.

At one level, this involves a reconfiguration of the U.S.'s traditional regional relationships. Washington's alliance with Tokyo has often been characterized as mixing an American sword with a Japanese shield. Now allies like Australia want to develop better swords of their own.

Developing this new system of overlapping pacts is already part of the U.S.'s regional plan. "Rather than form a grand coalition focused on every issue, the United States should pursue bespoke or ad hoc bodies," as Kurt Campbell, Biden's chief Indo-Pacific diplomat, wrote in an essay earlier this year.

Yet the task of managing and developing these bodies remains complex, as Campbell will know full well given the fallout from AUKUS. The fierce reaction in Paris alone should act as a warning of the enormous complexity of keeping together a broad U.S.-led coalition.

That kind of reaction need not be an insuperable barrier to bold new Quad steps. Indeed, beyond China and France, regional responses to AUKUS itself were reasonably measured, as they were in other European capitals. Yet nervousness about AUKUS is likely greater than official government statements in Southeast Asia let on. It also could well increase when Beijing decides to respond more forcefully, as it could if the Quad itself now moves forward more assertively.

The job of developing new Asian security measures clearly cannot be outsourced to the old Anglosphere alone. The U.S. and its partners would be wise to continue to ensure buy-in elsewhere around Asia, including among the more nervous nations of Southeast Asia. Keeping a broad trans-Atlantic coalition together also looks tricky, as the aftershocks from Afghanistan and AUKUS show.

Rather than triumphalism, AUKUS should therefore prompt a moment of sober reflection. Yes, it proves the U.S.-led grouping now has renewed energy and ideas. But it also underlines the immense challenge that the rise of China continues to pose to the U.S. and its partners, as they try simultaneously to compete with Beijing and keep their own broad and often divided balancing coalition together.

Campbell himself has described the task of developing and managing these shifting pacts as "among the most challenging in the recent history of American statecraft." As they meet this weekend, the Quad's leaders need to grapple with the significance of that challenge too.