The shock therapy Abe promised in 2012 is nowhere to be found. (Photo by Uichiro Kasai)

Deja vu is making the rounds again in Tokyo as Japan finds itself back on the verge of recession.

It could be there already. Japan's biggest manufacturers say business conditions are at the worst in nearly three years. Machinery orders fell 5.4% in January from December, according to data published on March 13. Leading indicators just fell for a third straight month. And the global trade war marches on, doing exponential damage to corporate and household confidence.

For Shinzo Abe, the timing could scarcely be worse. The prime minister's Liberal Democratic Party faces countrywide local elections in April and a House of Councilors (upper house) poll this summer.

Of particular concern: a 2.7% drop in the closely-watched coincident indicator index in January from December. It was the third straight monthly slip, and the largest in a year. This trajectory, the Cabinet Office said on March 7, is "signaling a possible turning point."

Economists were in January generally predicting 0.8% annualized growth this year. Expect bad news since then to have many lowering their forecasts -- some into the red -- for 2019.

The question is, how will Tokyo officialdom respond to the return of the downside risks? Japan bulls might salivate at the prospect of intervention. But in fact they should start worrying.

Punters are likely to see a return of Tokyo's worst habits: hastily-arranged stimulus packages that bust an already strained budget, pressure to ease on the Bank of Japan, and even more delays to the structural reforms Abe has promised since December 2012.

For starters, a sales tax hike slated for October looks increasingly doubtful. You do not have to go back to U.S. President Herbert Hoover's day in the 1930s Depression or Japan 1997 to understand the dangers of raising levies in a deflationary environment. It is enough to return to 2014, when a three-percentage-point hike, to 8% from 5%, led to recession. 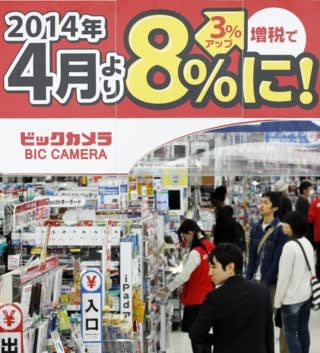 It is enough to return to 2014 when a three-percentage-point sales tax hike led to recession. (Photo by Shinya Sawai)

And a pointless increase at that. The move was, ostensibly, aimed at curbing Tokyo's crushing debt burden. Instead, the fallout had Japan borrowing more. By the end of 2018, government debt surged to a record $10 trillion. Why generate even greater headwinds by pushing sales taxes to 10% this year?

As the debt-industrial complex swings into action, so might the BOJ. Governor Haruhiko Kuroda is barely halfway to the 2% inflation target. We may see the central bank expanding asset purchasing or experimenting with new ways to break what Kuroda calls the "deflationary mindset."

There is a limit to the BOJ's influence, though. And this gets at the real problem: six years of talking about bold reforms that never materialized are catching up with an LDP facing voters.

While U.S. President Donald Trump's trade war is the most immediate threat to Japanese economic growth, it is important to consider how Abe's economy got to this familiar place.

For all his talk of new growth strategies, Japan's most powerful leader in decades largely resorted to the LDP's old playbook. Massive monetary easing? Check. Construction booms around the nation? Of, course. A weaker yen exchange rate? No doubt. Loud proclamations of epochal change to mask the reality of modest tweaks? Yes, indeed.

Certainly, Abe has had his successes. Moves to tighten corporate governance and sign a free-trade deal with the European Union are welcome. So are efforts to attract more foreign talent. But the shock therapy Abe promised in 2012 is nowhere to be found. Such complacency left Japan highly vulnerable to Trump's assault on global supply chains.

Japan's addiction to stimulus confronts Abe's party with a politically-fraught choice. It can get on with modernizing labor markets, incentivizing innovation and reducing bureaucracy. That would involve limiting immediate growth prospects with a view of building a stronger economy long-term. Or it can double down on the economics of deja vu and focus on short-term stimulus -- with more debt, more liquidity.

Though the first option would be optimal, the second is more likely. This year's elections increase the heat on a leader gunning for the title of Japan's longest-serving prime minister. Having failed to harness the longest expansion since the 1980s for reform, Team Abe will be even less inclined as recession risks increase.

What Abe should do is find a balance. While the BOJ and Ministry of Finance feed the stimulus habit (within reason), Abe should rekindle the reformist spirits that pervaded Tokyo in 2012.

Here, Kuroda has an instrumental role. Since March 2013, he dutifully pumped out unprecedented waves of cash. He has hoarded half of all outstanding government bonds, nearly 80% of exchange-traded funds, and other assets. Along with having limited effect, though, the BOJ's moves hit commercial bank profits.

Kuroda's experiment with negative yields eliminated spreads between long- and short-dated securities. That made it harder for bankers to turn profits and left lenders less inclined to take risks.

The BOJ should get transactional. We will deepen quantitative easing steps, Kuroda should say, so long as the government relaunches reforms. Abe could regain momentum by announcing imminent moves to shake up Japan.

The LDP loves a government panel. Why not order one up today, pulling in top CEOs to devise a to-do list and re-energize the process?

There is little time to waste. The finance ministry's latest quarterly survey of sentiment among Japan's biggest manufacturers showed a reading of -7.3, the lowest since the second quarter of 2016. Among medium-sized manufacturers, the figure is -15.3, is the worst in six years.

The immediate cause is slowing Chinese growth, a direct result of Trump's tariffs. In January alone, exports plunged 5.2% in real terms from December. The long-term worry is what the protectionist U.S. leader might do next. Trump has threatened to slap 25% taxes on imports of cars and auto parts. He is pressing Abe for a bilateral trade deal.

Trump also is hinting at demanding Tokyo pay more for hosting U.S. troops. He wants countries from Japan to Germany to bear the full cost of bases plus an additional 50%. That is close to extortion. It puts Abe in a difficult position with his nationalist right wing, a vital LDP constituency.

That threat only reinforces the political dangers stemming from recession risk. But despite the coming elections, Abe should avoid the temptation of the quick economic fix. Only by thrusting Japan out of its comfort zone can he move the economy beyond today's depressingly familiar boom-bust dynamic.