Prospects for the return of nearly one million Rohingya refugees to Myanmar look bleak. But with monsoon rains approaching, time is running out for the vast makeshift settlements inside Bangladesh's border with Myanmar.

With no viable long-term solution in sight for the refugees, does the offer of being relocated to an uninhabited remote island, Bhasan Char, in the Bay of Bengal represent their only hope of building a secure future?

The relocation plan proposed by the Bangladesh government has drawn considerable criticism. Dhaka has reportedly spent $280 million developing Bhasan Char as a resettlement center for 100,000 refugees. The island was created less than 20 years ago from accumulated sediment and is subject to flood risks and limited access during monsoon season.

International aid organizations face a dilemma in considering the controversial plan, which they and the Rohingya community have largely opposed. But, as an experienced aid worker, I believe it may yet prove to be the only pragmatic solution to the refugee problem as hopes for a successful and safe repatriation to Myanmar fade.

The Bangladesh government, like the United Nations, has many finely balanced relationships to consider as it looks for a solution to what appears an impossible situation. Increasing pressure from its own vast population, particularly near the camps in Cox's Bazar, is adding to the sense of urgency.

A successful working relationship between the government and relief agencies has enabled the safe sheltering of an estimated 750,000 Rohingya who have crossed the border since August 2017, fleeing a brutal military campaign that the U.N. is investigating as a possible genocide.

On a recent visit to the camps, I saw vast settlements of ramshackle temporary huts of bamboo and tarpaulin which form one of the most crowded refugee camps in the world. They have caused significant environmental damage since they have encroached on a once-dense forest reserve, uprooting trees and leaving the area dangerously vulnerable to flooding and landslides, as well as displacing endangered Asian elephants.

The annual monsoon rains are set to begin within weeks and aid organizations fear a humanitarian catastrophe if a cyclone hits the camps which have been fortunate to be spared one over the last 18 months.

Prime Minister Sheikh Hasina has suggested Bhasan Char could accommodate up to one million people -- fueling speculation that it could be expanded to accommodate all Rohingya refugees residing in Bangladesh.

Dhaka has agreed that all relocations would be informed and voluntary, in line with international refugee guidelines, despite repeatedly insisting that dealing with the Rohingya is an "internal matter." The foreign minister has conceded that the relocations may not happen if large-scale opposition persists. The minister met with three senior UN officials last week, telling them they would have to take the blame for any casualties in the Cox's Bazar camps due to the monsoon 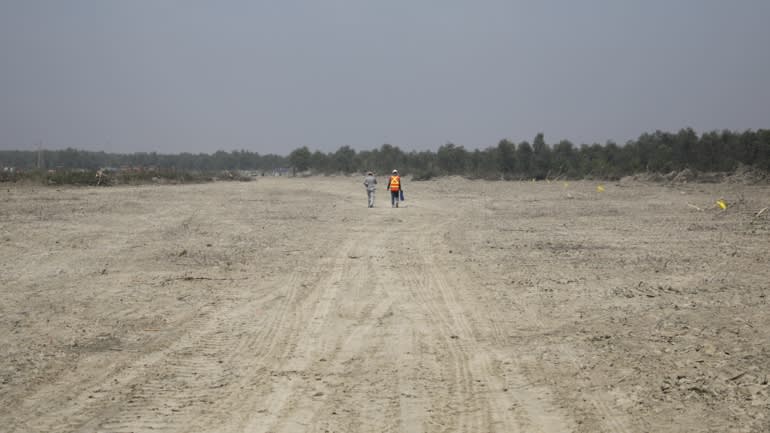 Dhaka has reportedly spent $280 million developing Bhasan Char, pictured in February 2018 during construction, as a resettlement center for 100,000 refugees.   © Reuters

Yanghee Lee, the U.N. special rapporteur on Myanmar, visited Bhasan Char in January and publicly questioned "whether the island is truly habitable." Although at least one Bangladeshi official raised doubts about whether she was the most qualified expert to make such an evaluation, the island still lacks an independent technical appraisal of its suitability to house the refugees.

Bangladeshi officials have acknowledged concerns about transportation links to the island. "During monsoon the seas are risky. It is difficult to access without the navy," Mohammed Rahman, a deputy commissioner at the Refugee Relief and Repatriation Commission, has acknowledged. But he added "that conditions for refugees will be better on the island."

The Rohingya remain steadfast in their opposition to any move. They cite fears of separated families, the risk of flooding on the island and the lack of education and health care services. The Bangladesh government wants to take refugee community leaders to the island to convince them of its merits. Having committed to voluntary relocations, Dhaka is understandably anxious to avoid Bhasan Char becoming one of the world's most expensive white elephants.

The reality is that this would likely be the final destination for the stateless refugees. "If we go there we may never return. We will become a forgotten people," said Amina Khatun, 45, a mother of four, a camp inhabitant who fled her home in Myanmar.

Repatriation is a key focus for international agencies, which are also pushing for justice through the International Criminal Court. But these goals are unlikely to be achieved because of the lack of cooperation of the Myanmar government.

It is not clear how aware those living in the camps are of their dwindling chances of returning to Myanmar, though unrealistic hopes for repatriation will hamper support for any permanent move to Bhasan Char or elsewhere.

With the coming monsoon season likely to force many refugees from their camps, it is possible that their opposition could weaken. If the refugees decide to move voluntarily, aid organizations will have no choice but to draw up plans to assist the government and find ways to deliver services as best they can.

The World Food Program, which has already submitted a detailed budget and timeline to facilitate any relocations, has been harshly criticized by Human Rights Watch, the international advocacy group. . "U.N. agencies should be talking about how to stop this ill-considered scheme, not facilitate it," it said.

The U.N. High Commissioner for Refugees, normally in charge of supervising relocation plans for refugees, is in unusual territory in Bangladesh, having to follow the lead of others. Because Bangladesh is not a signatory to the 1951 U.N. refugee convention, the government has not granted the Rohingya the legal status of "refugees," which denies them accompanying protections, instead, calling them "forcibly displaced Myanmar nationals."

This allows Bangladesh to decide what relief agencies it wants to work with, raising suspicions about whether the Rohingya are being treated humanely. The evidence that I saw and heard on my visit suggests the government and some of the local population are making genuine efforts to care for the traumatized Rohingya community. But this still does not remove concerns that the refugee crisis is being primarily viewed through a security lens.

Bhasan Char is far from a perfect solution and concerns about its safety are well founded. But the Rohingya refugees sadly lack any good options. Without a clear alternative being proposed by humanitarian or human rights organizations, criticism and disproportionate focus on pursuing criminal charges against Myanmar generals does not solve the most urgent problems. The government, despite its many faults, has produced an opportunity for those willing to take a risk. A fraught decision for the refugees, perhaps, but one that at least offers some hope. It is up to international donors and aid organizations to put substance into those hopes. 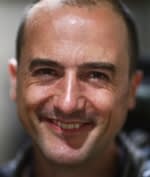 Louis Parkinson, a former Malawi country director of Chance For Change, is writing a book on refugees. He visited Rohingya refugees in Cox's Bazar to research child protection issues.