The deadly Ethiopian Airlines crash this weekend is a painful echo of last October's Lion Air disaster in Indonesia, in which all 189 people were killed.

Both accidents involved the new model Boeing 737 Max airliner and both occurred soon after takeoff.

It is for investigators to probe the causes and, if appropriate, to make comparisons between the two crashes. The fact that the same model was involved highlights the global nature of the industry and of such inquiries.

However, the two accidents are also a reminder that air safety is a pressing concern at many levels, including the regional. This is particularly true in Asia, the world's largest and fastest-growing air travel market.

While a big responsibility for safety lies with global organizations there is much that Asian governments should also do to improve safety.

The growth in the Asia-Pacific region's aviation is driven by the growing Asian middle-class. Low-cost airlines such as Malaysia's AirAsia, Vietnam's VietJet and Singapore's Scoot have responded to growing demand for affordable flights and brought useful competition to national flag carriers.

There will be more planes on Asian tarmacs, and more Asian passengers in the air. The International Air Transport Association (IATA), a trade association representing 290 airlines, reported that airlines in the Asia-Pacific region in 2017 carried the most passengers -- 1.5 billion, or some 36% of the 4.1 billion world total.

IATA projects the Asia-Pacific region to have 3.5 billion passengers by 2036, twice that of North America and Europe combined. This will make the region the aviation industry's biggest customer for years and the largest buyer of new aviation technology.

With Asia-Pacific becoming a major driver for air travel, the region now must also become a force in ensuring that its skies remain safe.

Progress has been made. Both the EU and the United States have lifted rulings banning Indonesia's airlines from their skies, imposed in 2007 following a string of accidents. After safety improvements, the Federal Aviation Authority did so in 2016, and the EU in June last year. 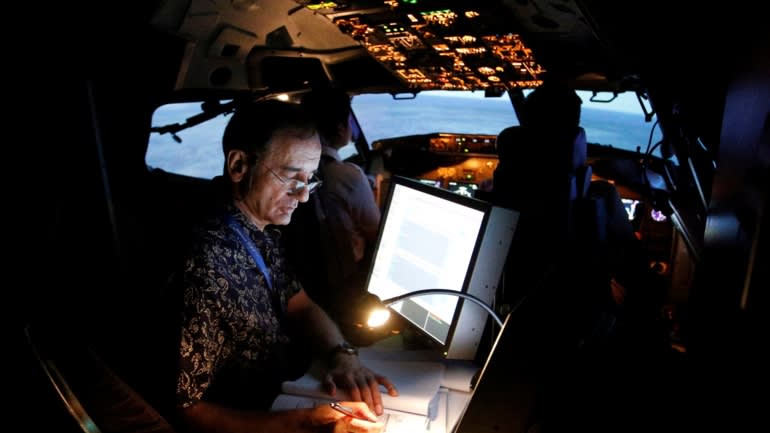 A senior instructor supervises the aviation students of Lion Air Group in a flight simulator on Nov. 2, 2018.   © Reuters

By the end of 2018, the list of air carriers banned in the EU included only a handful from Asia. The exceptions include all airlines from Afghanistan, Kazakhstan (excluding Air Astana), Kyrgyzstan and Nepal.

However, the Lion Air Flight 610 tragedy has rightly focused attention once again on doing more to ensure flight safety in Asia.

At the global level, a comprehensive approach to identify safety issues, advocated by the IATA, must be embraced by all parties -- including governments, airlines, manufacturers and consumers.

While IATA will rightly continue to play a key role, the Asia-Pacific's governments and regional institutions must step up to the plate. The Association of South East Asian Nations could develop new responsibilities. With its track record of cooperation, it can increase its role in aviation and lead the way for other parts of Asia where political tensions may inhibit collaboration, as in South Asia, where India and Pakistan are in conflict, or in East Asia, where China's expansionism has raised concerns among its neighbors.

While it is early days, this is the right approach. "Development of the Seamless ASEAN Sky together with the ASEAN Single Aviation Market is a must," said Patrick Ky, executive director of EASA. "It will soon become irrelevant how many passengers the airlines carry, aircraft are bought, or freedoms of the air are agreed -- if the air traffic management system cannot handle the demand, the only thing that is created is delays."

In time, other countries might be persuaded to join an ASEAN-led initiative, including China, India, Japan, South Korea and Australia.

Also, as a driver of global innovation, the Asian region can develop technological solutions to safety problems, which could be applied both in the region and elsewhere. The authorities should do more to encourage such initiatives.

One example is a new partnership between IATA and the Civil Aviation Authority of Singapore (CAAS) to improve aviation safety in the region. The two organizations have together created the Global Safety Predictive Analytics Research Center (SPARC).

Based in Singapore, it will use IATA's global flight data from 10,000 daily flights and predictive analysis to highlight aviation safety hazards. The conclusions will be made available to airlines and the aviation authorities to improve safety.

All parties must work to ensure that, as Asia's skies get busier, safety is not compromised. This means inculcating a culture of safety that embraces new technology, but also understands its limits and potential. Safety must be the priority of regulators, airlines and airplane manufacturers. Passengers must demand no less.