India's capital city, Delhi, has the most CCTV cameras per square mile of any city in the world.   © Reuters
CopyCopied

The past few years have turned India's capital city, Delhi, into a tinderbox of communal violence, majoritarian chest-thumping and police overreach.

Against this backdrop, a report by Forbes India has revealed that the city of 11 million people had the most CCTV cameras per square mile in the world. For Delhi's marginalized citizens, such a giant surveillance apparatus is oppressive.

To Delhi's Chief Minister Arvind Kejriwal -- who differentiates himself from the openly majoritarian Bharatiya Janata Party, which holds power nationally -- this ignominious statistic has become a point of pride.

"My compliments to our officers and engineers who worked in mission mode and achieved it in such a short time," Kejriwal tweeted, referring to the report.

Given that Delhi's police force reports directly to the central government's Home Minister Amit Shah and not Kejriwal himself, it is difficult to understand why he would claim credit for the city's CCTV cameras, especially given the many recent cases showing how the cameras are being misused.

Toward the end of 2019, when protests erupted against the Citizenship (Amendment) Act and proposed National Register of Citizens over the perceived victimization of Muslims, the widespread civil unrest posed a significant challenge to Prime Minister Narendra Modi's government.

Delhi residents who stepped out during this time to demand their constitutional right to equality found Delhi police personnel dotting the landscape, recording their every move with handheld cameras, reportedly feeding protesters' data into facial recognition databases.

But as counterprotesters took to the streets in February 2020 in retaliation, and violence against Muslims flared up in some parts of Delhi, one of the enduring images recorded during this time was that of a police officer breaking a CCTV camera to presumably mask the police's complicity.

When the police got around to eventually arresting the alleged perpetrators of the February violence, they targeted Muslims and their allies, attributing 137 of the 1,800 arrests made to the city's facial recognition technology.

Kejriwal and others might sincerely believe that a world-record number of CCTV cameras might make the city safer for women. But their use by Delhi police is laden with discrimination against Muslims. 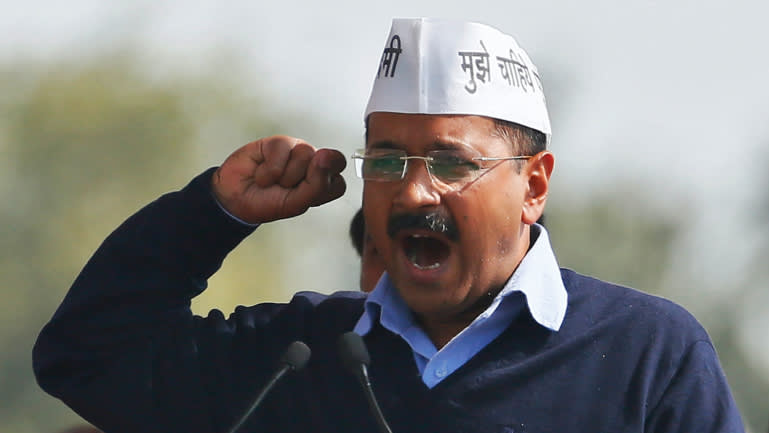 For Delhi's Chief Minister Arvind Kejriwal, saturation CCTV coverage has become a point of pride: "My compliments to our officers and engineers who worked in mission mode and achieved it in such a short time," he tweeted.   © Reuters

Putting this deployment of CCTV cameras to one side, facial recognition technology has other limitations. It can be inaccurate, identifying the wrong faces. It can also be biased, with research by Joy Buolamwini, Timnit Gebru and others showing that facial recognition algorithms can be more inaccurate when it comes to recognizing people of color and young people.

Many of these biases spring from the fact that databases of mostly white faces are used to train the programs, making them less likely work as well when it comes to recognizing nonwhite faces.

According to my own research published by the Vidhi Center for Legal Policy, the distribution of CCTV cameras across Delhi was uneven. We also found that some areas with a significant Muslim population were overpoliced in comparison to the rest of the city. These areas had more police stations per person than other areas.

When facial recognition technology is applied to such uneven police deployment, its inaccuracies are bound to be magnified in line with police biases. Muslims living in these areas will face the triple bind of inaccurate technology, disproportionate police presence and police biases.

Many activists have pointed out that there is no legal backing to support the use of CCTVs and other facial recognition technology in India. This also means that there are no checks and balances or public disclosures on agreements of private technology providers with the police.

Most importantly, no public deliberation or consultation preceded the deployment of this technology. Neither parliament nor other public institutions had any say or oversight over the widespread adoption of CCTV. India does not even have a general privacy law yet, let alone a law to minimize discrimination by algorithm and the misuse of information gathered in this way.

Muslims are not the only victims of CCTV surveillance. In January, many farmers rode into Delhi on their tractors in protest against the Modi government's new farm laws. When some of these groups broke ranks and spilled outside the designated protest route, police used facial recognition technology to make a number of arrests.

While the major farmer organizations distanced themselves from the violence, the case was nevertheless used by the government to condemn the farmers' protests in general. Now the city of Lucknow wants to set up its own facial recognition system to spot "women in distress" by tracking their facial expressions. Airports, schools, even Indian Railways, are now awash with cameras connected to facial recognition systems.

When Kejriwal expressed pride in Delhi's CCTV numbers, Delhi Police was quick to claim credit, boasting of its partnership with the same Resident Welfare Associations that have been in the news lately for furthering discrimination against Muslims.

In the competition between the central government and the Delhi government to lay claim to the proliferation of CCTV cameras, the rights of citizens are being trampled upon. It is time for people to do more than just walk past signs that say "Smile -- you are under CCTV surveillance."