Sex, booze and the Olympics Australian Dawn Fraser after splashing her way to victory in the 100-meter freestyle event, pictured on Oct 19, 1964; she became famous for her run-in with the Tokyo police.   © Bettmann/Getty Images
CopyCopied

Robert Whiting is a Tokyo-based journalist and author of books including "You Gotta Have Wa," and "Tokyo Underworld." His memoir "Tokyo Junkie: 60 Years of Bright Lights and Back Alleys . . . and Baseball" was published this year.

The Olympics are a time for international athletic competition. They are also a time for sex and alcohol, wild merrymaking and breaking all the rules.

Australian superstar Dawn Fraser wrote about what really happened at the 1964 Tokyo Olympic Games in her autobiography Below the Surface: The Confessions of an Olympic Champion, published in 1965.

Fraser, some of you may recall, was famous for her run-in with the Tokyo police, only days after her third successive Olympic gold medal in the 100-meter freestyle. The fun-loving swimmer was arrested after stealing a five-ring Olympic flag from in front of the Imperial Palace in the heart of downtown Tokyo, and then appropriating a police bicycle to make her getaway, leading the police on a spirited chase.

In her book, Fraser wrote candidly about her Tokyo Olympic experiences, in which she said that stealing souvenirs -- silver salt and pepper shakers, crystal wineglasses and other items -- was as common among Olympians as getting sloshed after events and having sex in wild parties in the Olympic Village.

She also revealed that some countries, including Japan and Sweden, had an earthy approach to sex, and coaches and officials were known for simply providing girls -- both amateur volunteers and pro -- to any male athletes who wanted them. Fraser did not say what those coaches and officials provided for female athletes who wished to relieve their own tensions after a hard day of competing.

Two months after her book was published in January 1965, the Australian Swimming Union suspended Fraser from competition for 10 years.

American soccer star Hope Solo described extracurricular activities in the Olympic Village during the 2008 Beijing Olympics. Solo and her teammates regularly sneaked unauthorized male friends into their rooms, using their gold medals to distract security. After one all-night drinking party, she appeared on a U.S. morning show still drunk and "looking like hell."

Competitors at the 2012 London Games -- where alcohol and drugs were banned in the Olympic Village -- wrote of filling water bottles with booze and smuggling in weed as well as doping agents.

At the 2016 Games in Rio, booze-filled parties were well documented, and the number of condoms distributed by officials reached 450,000 -- with 175,000 sachets of lubricant for good measure -- a new Olympic record. By contrast, officials at the 2000 Sydney Games issued 70,000 condoms, only to run out in the first week. 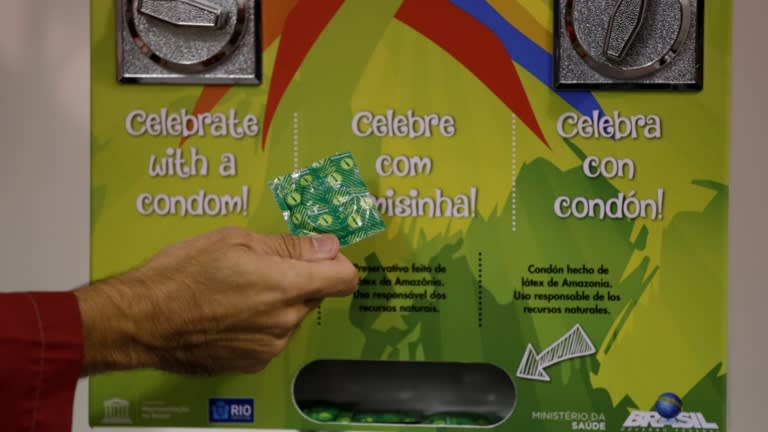 A condom dispenser at the 2016 Rio Olympics Village, pictured in July 2016: the number of condoms distributed by officials reached 450,000.   © Reuters

Let's not forget when American swimmer Ryan Lochte and three teammates vandalized a Rio gas station and then lied about it. He was suspended for 10 months. Stealing a flag seems so quaint now. Still, I do not imagine the 2020 Games will be much different.

While the Tokyo Organizing Committee will not provide alcohol or sell it in the village, athletes will be allowed to bring alcohol in their suitcases. Requests to drink at celebratory occasions will be facilitated by in-house caterers. This is certainly in keeping with the spirit of international friendship and cooperation that the Olympics represent.

Due to risks posed by COVID, measures will be taken to protect athletes in a bubble environment. Entry to the Olympic Village will be allowed five days before the start of the competition, and athletes will only be able to leave within two days of the games ending. Any attempts to exit the village will include severe penalties, including disqualification.

At the same time, 150,000 condoms will be made available for athletes' use inside the Olympic Village. Officials tell us that this is for the purpose of "raising awareness of infection prevention, for taking home and enlightening people." Ha-ha.

Despite the 8,000 people employed to watch over the safety and security of the players 24 hours a day, I predict they will have as much success at controlling the athletes' social habits as officials at previous Olympics. It is an impossible task.

Officials of the International Olympic Committee will no doubt ignore the rules as well.

If the games are held in a state of emergency, as IOC Vice President John Coates said they might be, IOC officials like him will no doubt be staying in expensive hotels drinking the finest whiskey and wine Japan has to offer -- while ordinary Japanese will have to abstain from going out.

IOC officials will get what they want, including President Thomas Bach, who will have an audience with Japan's emperor. Even though 80% of the Japanese public are against staging the games in July, in an opinion poll conducted by Kyodo News in January, IOC officials will no doubt be enjoying themselves more than anyone.

It is the way of the IOC. As Andrew Jennings wrote in his expose "The New Lords of the Olympics," there was intensive wining and dining of IOC officials when they visited Tokyo in 1958, including lodging at Tokyo's most expensive hotel and the prepaid services of Tokyo's finest call girls.

Officials from Salt Lake City, Utah, wooed the IOC as it considered where to hold the 2002 Winter Games, even using credit cards to pay for prostitutes for committee members from Africa and Latin America.

The aforementioned John Coates, who recently dismissed public opinion polls in Japan calling for the cancellation of the Olympics, admitted offering $70,000 to two African IOC delegates the night before Sydney won the 2000 Games by two votes.

Then there was the consulting firm hired by Tokyo's 2020 Olympic bid committee that paid some $370,000 to the son of an IOC member before and after Japan was picked to host the games, media reports revealed in September 2020. It never ends.

The first article of the Olympic Charter stresses the educational value of setting a good example, social responsibility and respect for universal fundamental ethical principles. I wonder how many of IOC officials -- and athletes -- have actually ever read it.