Shaktikanta Das is India's 'whatever it takes' banker Karan Mehrishi is an economics commentator based in India. He is the author of "The India Collective: What India is Really All About" and the forthcoming "The Making of Monetary Policy in India: Imagining the Future."

Reserve Bank of India Gov. Shaktikanta Das has the unenviable task of overseeing a worse economic catastrophe than those befalling any of his predecessors.

With India's economy contracting 7.3% last year and faltering this year as well due to a devastating second COVID wave, right from the beginning of the crisis, Das has been at the forefront trying to pacify markets.

After presiding over the sale of a record $140 billion worth of bonds over the last 12 months, calming market nerves is obviously one of his most important roles. Since being appointed governor in December 2018, Das has mobilized a record $190 billion and counting, providing some necessary grease for India's debilitated economic machinery.

The stimulus package has so far included cheaper loans, extended limits for vulnerable businesses and liquidity support to financial institutions, and has provided a lender-of-last-resort facility for the central government.

Das, of course, is not the first bank governor to serve under Prime Minister Narendra Modi since he was elected in 2014. Modi's first governor Raghuram Rajan resigned in 2016, while successor Urjit Patel quit after serving just over two years in the coveted post.

Steeped in babu culture -- read career bureaucrat, Das first had to overcome the skepticism of many who believed he did not have the economic smarts to match either of his predecessors. Proving an astute administrator, Das has also shown himself able to read the political realities on the ground and has certainly delivered as far as monetary stability is concerned.

Throughout his career as an Indian Administrative Service officer, Das sat on both sides of the table, especially in his last stint as economic affairs secretary. Given his background, Das has probably found it relatively easy to juggle different hats and navigate the rough waters of fiscal and monetary conundrums.

Under his watch, the RBI has continued to do its job of supervising and strengthening commercial bank audits, especially when rising nonperforming assets could have disrupted public confidence in a saver's economy. Das has also been careful not to renounce the RBI's obligation to pay the government sorely needed dividends. It has been a herculean task.

As a central banker in an economy that primarily exhibits fiscal dominance where monetary policy is dominated by the whim and fancy of the government of the day, Das understood that maintaining low interest rates was not enough. The RBI's record $24 billion dividend payout in 2020, as well as this year's $13.5 billion payout, are cases in point.

While this has weakened the bank's ability to manage downside risks, Das has walked the thin line of not disappointing Modi while at the same time maintaining a semblance of normalcy at the RBI. The view in the market is that given the RBI's substantial foreign exchange and gold holdings, further economic volatility will only appreciate these assets, balancing out the pressure to increase dividend payments. On the other hand, the dividends paid will nevertheless play an important role in India's macro stability, as they currently make up 6% of the total government revenue and 41% of its nontax income.

Das has also successfully managed the rupee as it battles the vagaries of the dollar. When the rupee recently fell sharply against the dollar, Das did not hesitate to intervene, digging deep into the RBI's foreign exchange reserves, determined to give the rupee a soft landing. This market assurance, combined with benign U.S. conditions, helped to shore up the currency in a short span of time.

For a commodity-importing country like India, a strong rupee is extremely important, as fluctuations in exchange rates directly hit vulnerable households. Das seems to understand this underlying condition and has used all the firepower at his disposal. 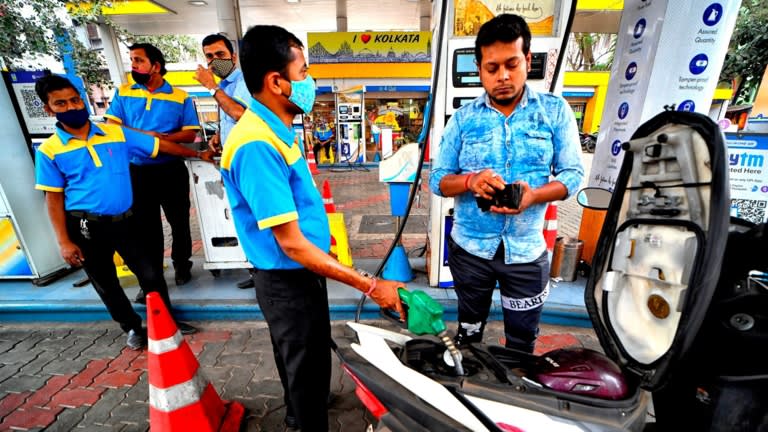 A pump attendant refills a motorcycle at a petrol station in Kolkata on Feb. 21: for a commodity-importing country like India, a strong rupee is extremely important.   © Sipa/AP

At the same time, the central bank has been vigilant about inflation while managing to maintain systemwide liquidity. It has been quite a task for the RBI to handle record foreign money inflows over the past year and adjusting the balance sheet accordingly.

This has been especially true given the fact that the Das-led RBI has chosen growth over inflation, which makes raising interest rates a nonoption. Unfettered, Das has repeatedly warned of inflationary tendencies in the economy, cautiously nudging market expectations.

While his proficient handling of India's economic crisis should be applauded, Das's keen desire to please his prime minister seems a little overwhelming. Fiscal dominance is one thing; safeguarding the RBI's interest is another, and that must be the governor's top priority.

Das's "whatever it takes" attitude is also percolating through to his resolute fixation regarding yield thresholds for government bond auctions. This has apparently become a bone of contention in the market, resulting in several devolutions of government security auctions -- this is where the RBI is not willing to accept the market's offer on government securities, eventually leading to a no-deal -- something that has impacted the central bank's reputation with investors and dealers alike.

To guarantee his legacy, Das must therefore remain sympathetic to the market consensus and the relationship it shares with the RBI. Preserving this trust will be pivotal for Das, even if it means cooler ties with the government on Raisina Hill.