Abe speaks next to a map showing participating countries in negotiations for the TPP in March 2013: his embrace of globalization was the result of a coldblooded realpolitik.   © Reuters
CopyCopied

Tobias Harris is senior vice president at Teneo Intelligence and author of "The Iconoclast: Shinzo Abe and the New Japan."

In March 2019, Steve Bannon, former adviser to President Donald Trump, met with a group of lawmakers from Japan's Liberal Democratic Party, or LDP, and told them, "Prime Minister Abe was Trump before Trump." Abe, he argued, was a full-fledged member of the global nationalist wave that had elected Trump and pulled the United Kingdom out of the European Union.

It would be hard to find a description of Abe that was less accurate. The fact is that as Abe leaves power after announcing his intention to resign on August 28, he has forged a legacy as one of Japan's most globalist leaders ever.

Abe was repeatedly willing to spend political capital on policies that opened Japan to international trade and capital. Over his nearly eight years in power, he first overcame resistance from within his own LDP to joining the Trans-Pacific Partnership, or TPP, to bring Japan into the negotiations, instantly elevating the bloc into a pact that would bring together two of the Asia-Pacific's largest economies.

Then, after the Trump administration withdrew from TPP on day one, Abe rallied the eleven surviving members to revive the agreement as the Comprehensive and Progressive Agreement for the Trans-Pacific Partnership, or CPTPP, -- and finalized a long-negotiated free trade agreement with the EU. In effect, Abe had found a way to advance global economic integration among some of the world's wealthiest economies after the demise of the Doha Round. "Japan is determined to preserve and committed to enhancing the free, open, and rules-based international order," he told an audience at the annual globalist confabulation in Davos in 2019.

No less important was his commitment to open Japan to foreign visitors, foreign workers, and foreign residents. In preparation for the 2020 Tokyo Olympics -- postponed to 2021 due to the COVID-19 pandemic -- Japan rapidly upgraded its tourist industry. After taking office in 2012, Abe's government established a target of 20 million international visitors by 2020; by 2018, more than 31 million came, and Japan had raised its 2020 target to 40 million. While the tourists have all but vanished as Japan has closed its borders in response to the pandemic, tourism has become so vital a part of the Japanese economy that Abe decided to roll out a domestic tourism promotion campaign in July, even as its COVID-19 cases peaked again and despite widespread public opposition to the program. While it is unclear if and when Japan will regain the peaks it reached before 2020, future leaders will likely continue to attract Asia's rising middle classes to Japan. Meanwhile, Abe came to recognize that as Japan's labor force shrank, it had no choice but to rely on foreign labor across the economy. His embrace was gradual, starting with reforming and expanding a "technical intern training program" that was found to be rife with abuse. Then, he decided to roll out a new work visa in 2018 that would all but amount to a formal guest worker program, allowing workers in designated sectors -- those experiencing especially acute labor shortages due to the booming economy -- and with certain skills the ability to work in Japan for up to five years. 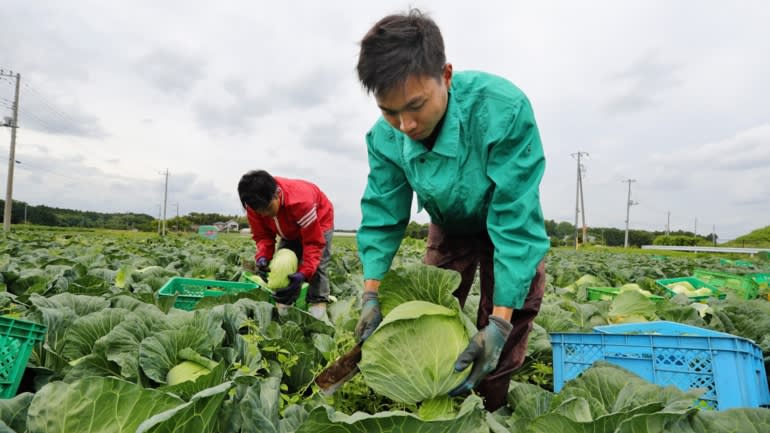 Technical interns from Indonesia harvest cabbages, pictured in May 2018: Abe came to recognize that Japan had no choice but to rely on foreign labor. (Photo by Ken Kobayashi)

As Abe repeatedly stressed -- as the Diet considered the legislation -- while it was not an immigration policy, it could nevertheless open Japan to as many as 345,000 migrants per year. The program's first year was a disappointment. As of December 2019, only 1,621 migrants had arrived on the new visa. But that does not change the fact that Abe was willing to push the program through over the opposition of the LDP's right-wing, which warned that Abe was making the same mistake as Germany's Angela Merkel, crippling his mandate in the name of opening Japan to foreigners. Even without the new work visa, Japan still reported nearly 3 million foreign residents in 2019, nearly a third of them from China.

To be sure, Abe did not embrace globalization out of an ideological commitment to free markets or neoliberalism. Rather, his embrace was the result of a coldblooded realpolitik: with its population shrinking, Japan had no choice but to open new markets for its businesses, tap new sources of labor, and find new sources of consumption and investment within Japan itself.

Trade agreements like the CPTPP and the EU FTA would also strengthen Japan's ties with other democracies and perhaps even nudge China in the direction of economic reform. His commitment to global integration was never total. Despite calling for more foreign direct investment, for example, in 2019 Japan still had the lowest share of foreign direct investment to GDP among the Group of Seven, only 4.3% compared to second-to-last Italy with 22.3%. Meanwhile, Japan's trade agreements still preserved generous protections for agricultural producers. And he was willing to use market access as a weapon in a dispute with South Korea over compensation for laborers allegedly forced to work in Japan during the World War II.

Nevertheless, during Abe's tenure, Japan globalized as never before. As the world recovers from the COVID-19 pandemic and Abe's successors chart the way forward in a new decade, it is likely that they will continue to follow the course Abe charted.