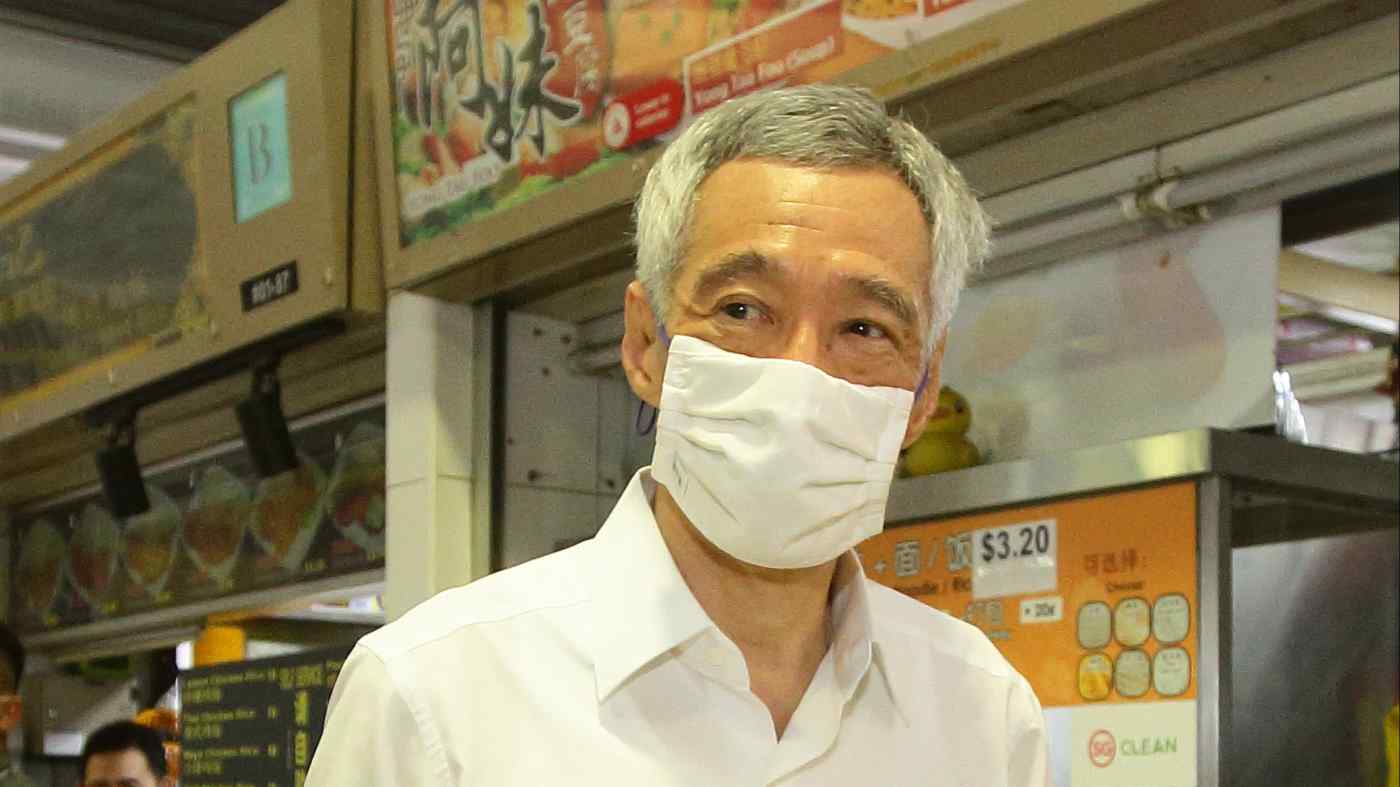 Lee Hsien Loong, pictured during his walkabout on July 3, has been slow to remake the city into an innovative power,   © Getty Images
CopyCopied

On Friday, Singaporeans will be among the first in the coronavirus era to vote on a national leader. While Prime Minister Lee Hsien Loong is roundly expected to extend his 16-year reign, there are signs the economic consequences of the pandemic may be setting the stage for an upheaval to come.

The nation of 5.8 million is not a COVID-19 disaster, with only 26 deaths from 44,000 confirmed cases. Economically speaking, though, Singapore is proving uniquely susceptible to its global fallout.

Lee is, of course, the son of Lee Kuan Yew, who between 1959 and 1990 morphed a former British colony into a global trade and industrial hub. Today, it is one of the globe's most cosmopolitan city-states.

The current Lee's tenure has been far less transformative. He mostly rested on his father's laurels and those of predecessor Goh Chok Tong, maintaining respectable growth but largely by increasing Singapore's footprint as a manufacturer. He has been slow to remake the city into an innovative power, a shift vital to maintaining high income levels. As Indonesia, Malaysia, the Philippines and Vietnam boost market share, Singapore is becoming an expensive enclave in a more affordable neighborhood.

Friday's election should be about how Lee plans to accelerate the economy's shift upmarket into biotechnology, energy, health care, logistics and software and make it a home for entrepreneurs dreaming up game-changing startups. This latter aspiration has much to gain from China's crackdown in Hong Kong.

The People's Action Party, which has ruled since independence in 1965, faces growing questions as jobs disappear, high living costs collide with slowing income gains and the COVID-19 shock challenges Singaporeans' faith that their nation is on the right track. The economy is stumbling toward its worst-ever downturn, shrinking between 4% and 7% this year.

The coronavirus shock is shining a bright and uncomfortable spotlight on Lee's complacency in diversifying growth engines. Singapore's reliance on cheap imported labor also is raising hackles with the electorate.

Early on, Singapore was a COVID-19 success story. A renewed surge in infections, though, emanated from the dormitories housing migrant workers -- reportedly as many as 90% of new cases.

Recent years have seen an increase in anti-immigration sentiment as wages stayed stagnant. Singapore, it is often said, is being squeezed at both ends of the income ladder. At the top, richly-compensated expat bankers and CEOs bid up real estate values. At the bottom, imported labor from Malaysia, Indonesia, the Philippines and elsewhere places downward pressure on wages.

As these strains come to a head, trade-heavy Singapore is bracing for the next leg of the U.S.-China trade war. That would wreak havoc with global demand and the supply chains on which Singapore relies. The prime minister's brother Lee Hsien Yang, pictured during a walkabout on June 24, says there are many issues that are alive.   © Getty Images

In the short run, the government should increase cash handouts and housing subsidies as part of COVID-19 rescue efforts. To date, Singapore has pledged spending of nearly 20% of gross domestic product. Japan, by contrast, is doing 40%. Consider Singapore at the vanguard of governments in developed nations which look like they are going to have to increase their stimulus packages.

In the longer run, there has never been a better time to roll out tax tweaks and other incentives to turn Singapore into the home of choice for entrepreneurs in Asia and far beyond. Lee's team could work up regulatory loosenings, grants for research and development and office-space discounts to wannabe tech disruptors of tomorrow.

Gone are the days when Singapore could compete on price. That is why Lee's team has endeavored to import a Silicon Valley-like vibe to the heart of Southeast Asia. In 2016, the government created the Government Technology Agency, or GovTech. The idea was to get all vital institutions working in unison to cut red tape, avoid overlapping regulations and turn the entire economy into a sort of special-enterprise zone.

It was a great idea, but one marred by glacial implementation. Singapore still lags far less developed Indonesia in creating tech unicorns, and Hong Kong too. Certain government priorities, like a "fake-news law" that may imperil free speech, are at cross-purposes with that goal.

Lee's government must take risks on the education system, which prizes rote learning over out-of-the-box thinking. A bigger safety net is needed to encourage young Singaporeans with a laptop and a dream to take risks to disrupt the economy.

Singapore has more than proven its mettle. What it needs now are bold policies to embrace new niche, high-value-added services from technology to pharmaceuticals to renewable energy sources. With a new mandate, Lee has it in his power to raise Singapore's economic game. Will he?

The prime minister's younger sibling says the nation needs a "catalyst for change." And brother, does he have a good point.