Conflicts of interest are not a problem Yoshimitsu Goto,CFO of SoftBank Group: the ownership ratio does not matter for the company because they do not plan to control these group businesses.
CopyCopied

It is often said that the structure of SoftBank Group, a listed holding company, is confusing. There was a time when I felt the same way, but not any more. Frankly, I doubt there is any management structure that is as clear-cut as ours.

SoftBank Group has nine listed subsidiaries. The appropriateness of parent-subsidiary dual listings has been much debated. The listing of SoftBank Group subsidiaries, as well as corporate governance issues following the acquisition of listed companies, has generated many media headlines.

What makes our group unique is that SoftBank Group, the holding company, is a pure investment company. We believe that the value of an investment company derives from both sum-of-the-parts valuation and the assessment of the company's investment strategy.

Meanwhile, EBIT (consolidated earnings before interest and tax) or the amount of cash flow carry no special significance. SoftBank Group's EBIT exceeded 2 trillion yen ($19 billion) in the fiscal year ended March 2019, but the following fiscal year had a loss of about 1.4 trillion yen. The fact that earnings fell by as much as 3.4 trillion yen on a year-on-year basis would rattle any other CFO, but not me.

I remain calm and focused. This is because the total equity value of our portfolio companies is stable, reaching nearly 30 trillion yen.

Whether a portfolio company of ours is classified as a consolidated subsidiary, an equity-method affiliate or an investment security is a minor detail to our group. What matters is the equity value of each company, because this determines the generation of the expected internal rate of return.

There is a fundamental limit to the capacity of the holding company to take direct command of all group companies in value enhancement. Time is one of the most critical factors in achieving a higher return on investment. Each company should be able to make its own decisions speedily. This will also encourage autonomy at each company. We believe this is a benefit of listing subsidiaries.

One good example is the telecom operator SoftBank Corp., a consolidated subsidiary of SoftBank Group. Before its listing in December 2018, Masayoshi Son, Chairman and CEO of SoftBank Group, was involved in many important discussions as an executive officer.

Now that the company is public, Masa's position at SoftBank Corp. has shifted to that of a nonexecutive director, advising the company's management. Masa's statements still carry weight because he could exercise his shareholder rights, but his only reason for doing so would be to increase SoftBank Corp.'s shareholder value. As such, he will fulfill his commitment to SoftBank Group stakeholders. 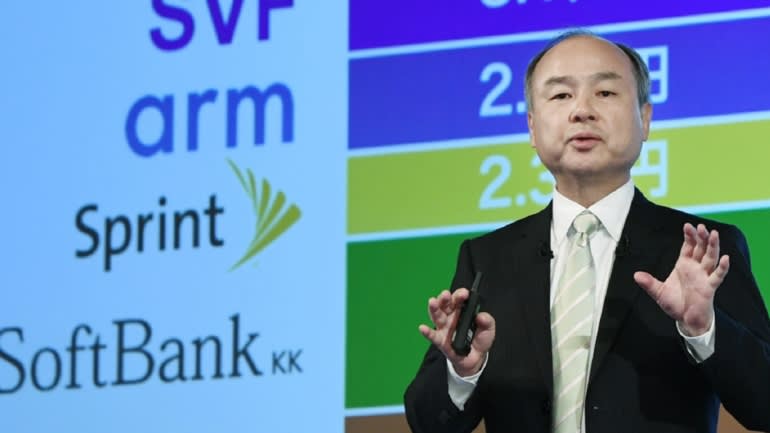 Masayoshi Son's only reason for advising SoftBank Corp.'s management would be to increase the company's shareholder value. (Photo by Shihoko Nakaoka)

I am aware of the debate that dual listings should not be accepted in the first place. One rationale is that parent-subsidiary dual listing is rare in global markets, and when it does occur, it is considered only as a temporary measure. That is, however, simply untrue. There are quite a few listed subsidiaries in Europe, the U.S. and Asia-Pacific countries, and they are owned on a continual basis.

SoftBank Group, on the other hand, is an investment company and has no operating division. Consequently, there is no conflict of interest with its subsidiaries. Our one and only expectation is rapid growth in the equity value of our investees.

Minority shareholders and SoftBank Group are all part of the same investor group. Naturally, investors have different views, but conflict of interest is not an issue.

SoftBank Group is a unique example of a publicly listed strategic investment and holding company. We are a pure investment company that strives to maximize the equity value of its group companies as quickly as possible. As a one-of-a-kind company, SoftBank Group will continue to take on challenges.