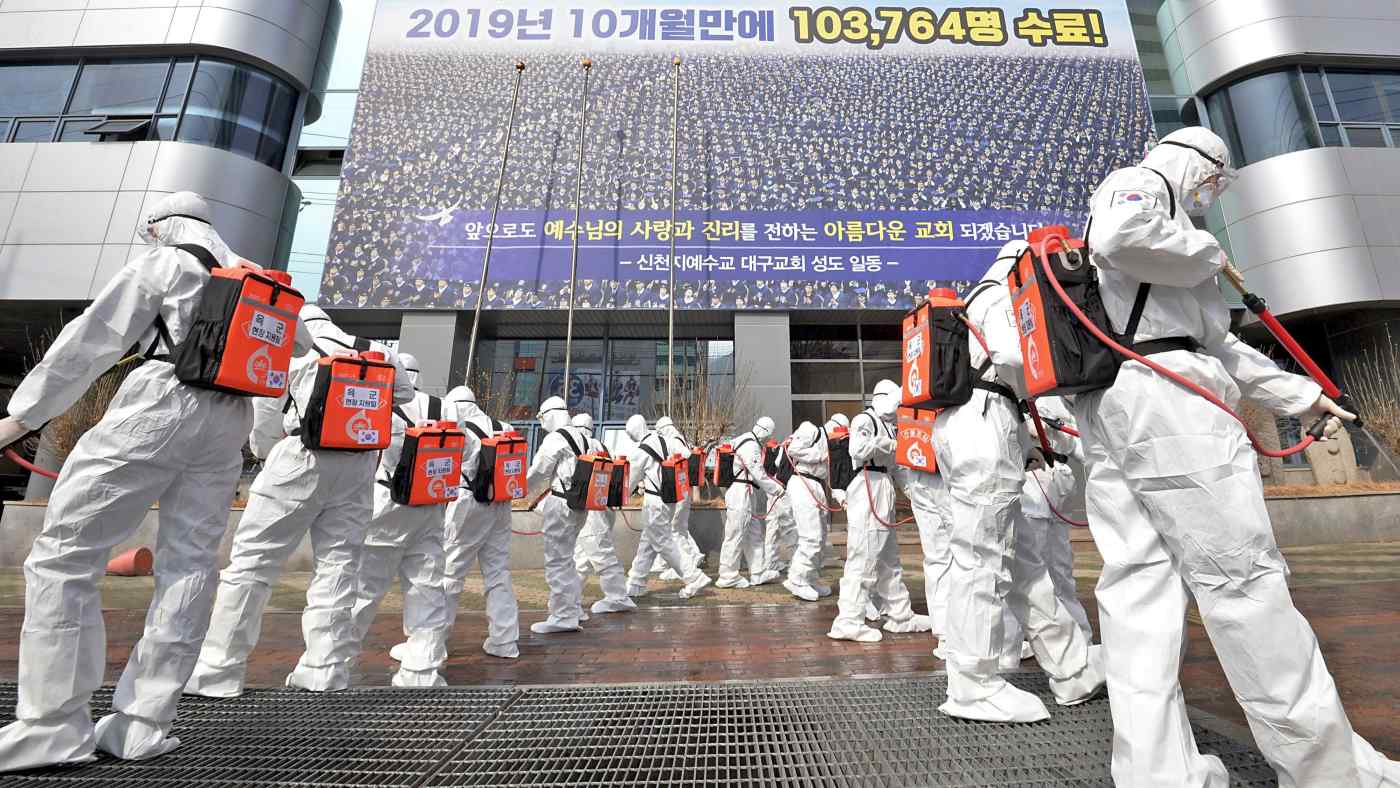 Army soldiers spray disinfectant in front of a branch of the Shincheonji Church of Jesus in Daegu on Mar. 1.   © Newsis/AP
CopyCopied

When the number of coronavirus cases in South Korea started exploding, scientists quickly identified a common origin: they were members of Shincheonji, a Christian new religious movement or cult, in Daegu, Korea's fourth largest city.

The unique style of its services explains the high risk of contagion, according to the testimony of a former member: members are instructed to kneel on the floor in tight rows at church halls and they are not allowed to wear masks during services. As of March 2, around 60% of South Korea's 4,200 COVID-19 cases were linked to Shincheonji.

Korea, along with Singapore, is one of the most successful nations for church growth in modern Asia, and Shincheonji is one of the largest sects in the country, with 310,000 members, more than 1,500 buildings, including sanctuaries and missions, and even a presence in Wuhan, where the outbreak started.

It is worth looking at, then, where these new religious movements come from, how they recruit members, and how the government can stop them making the spread of the coronavirus worse.

According to 2015 statistics, 44% of Koreans have a religious faith. Buddhism and Confucianism have been more influential thus far, but Christianity is the most popular belief, more than a quarter of the population. Christians are actively involved in politics, economics, culture, government and international relations.

One offshoot of this has been the emergence of radical and apocalyptic cultic groups. The insecure conditions of the early 20th century offered a great opportunity for religious pluralism, with mystical movements drawing on Swedish and Indian thinkers from the 1920s.

In the next generation, three dynamic grassroots groups, controversial but widespread, emerged: Guwonpa or Good News Mission, the World Mission Society Church of God and Shincheonji Church of Jesus the Temple of the Tabernacle of the Testimony. These and other Christian sects secretly approach women, university students and ethnic minorities in the name of social welfare or promoting peace in local and international levels.

Shincheonji was created by Lee Man-Hee in Gwacheon, near Seoul, in the 1980s. Lee had been a member of Park Tae Son's Olive Tree religious movement and Yoo Jae Yul's Temple of the Tabernacle, and when he became independent, he claimed to be the second coming of Jesus Christ. Members wear white shirts, dark pants and an identification badge around their necks.

The movement strategically sends evangelists who use interviews, surveys, cultural centers, college clubs and psychotherapy to meet potential recruits and introduce them to professionally trained instructors. Other Korean Christians have negative impressions about Shincheonji the new religion purposely targets other churches' members instead of non-Christians.

In the context of spreading the coronavirus, no traditional religions, Buddhism, Confucianism and Daoism, have had much impact because they have fewer group activities. On the other hand, the Catholic and Protestant churches have daily and weekly assembles.

As a result, most megachurches have temporarily canceled meetings, overseas trips and various fellowships, but have encouraged members to participate in internet services and church media networks.

Lee, Shincheonji's founder, has denied claims that the church is responsible for spreading coronavirus, calling it "a devil's deed to stop the rapid growth" of the cult. But on Monday he apologized that one of its members had infected many others in South Korea: "We did our best but were not able to stop the spread of the virus." 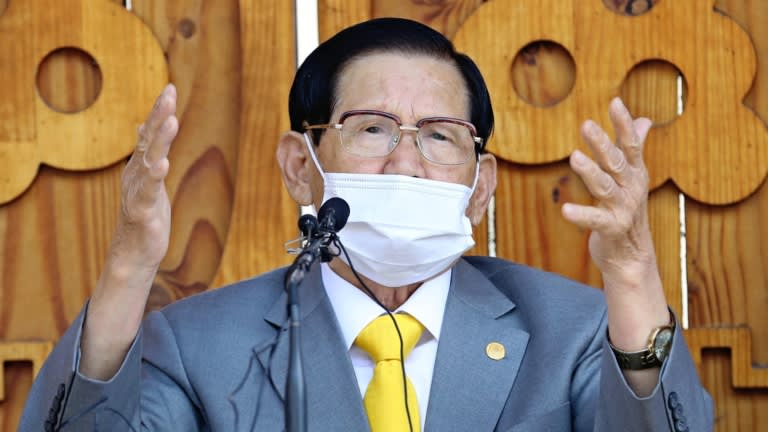 Lee Man-hee, pictured on Mar. 2, has denied claims that the church is responsible for spreading coronavirus, calling it "a devil's deed to stop the rapid growth" of the cult.   © Yonhap/Reruters

The church has now stopped all services and when President Moon Jae-in asked Shincheonji to cooperate, Lee, now 88, said it would as long as the government kept members' personal data out of the public domain. The governor of the Gyeonggi Province, which surrounds Seoul, said Shincheonji had provided him with a list but claimed it was incomplete.

The Korean government has been clever in how it has managed Shincheonji to ensure some cooperation without putting it on the defensive. It reminded the church of the disastrous social effects of the Sewol ferry incident in 2014, where 304 people died when a boat owned by a company controlled by a cult leader capsized and sank.

But now, as the coronavirus spreads across the country, the government must be firmer. It should instruct isolated socio-religious communities in practical methods of prevention and apply penalties if individuals or groups do not notify medical experts about members who have contracted coronavirus.

Since the spread of the coronavirus in South Korea is intimately related to the unique community style of religious movements, the government must tackle them head-on. 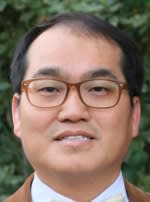