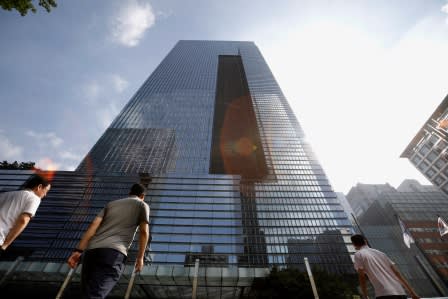 For young Koreans, big companies are a source of national pride but also a target of anger over inequality.   © Reuters
CopyCopied

South Korea is taking the life-imitates-art maxim to new extremes as construction begins on a "Hunger Games" theme park. Lionsgate aims to give millennials a chance to unleash their inner Katniss and pretend to fight to the death.

Yet the movie studio's project is a pale shadow of reality in a nation where the young already battle like maniacs for jobs. "Been there, done that" might be the reaction of many twentysomethings facing what can seem like a dystopian future in the labor market. The "game makers" deciding youngsters' fates are not the bloodthirsty impresarios of the films but Samsung, Hyundai, LG, Daewoo, SK and a handful of other conglomerates.

Enter President Moon Jae-in, who wants to take these gamemasters down a peg to pump new life into the economy's veins. Earlier this month, Moon deepened the plot with a contrarian corporate tax increase. While President Donald Trump slashes U.S. levies and Japan and China mull similar moves, Moon is turning the screws on the chaebol. Moon's hike from 22% to 25% applies to companies whose taxable income exceeds $279 million, and there is no doubt at which characters he is aiming.

Young Koreans have a love-hate relationship with their corporate overlords. They love the role these national champions played in lifting Korea from the ashes of war into the ranks of the Organization for Economic Cooperation and Development (OECD), the developed countries' grouping. The ubiquity of Korean gadgets and cars in the West -- including giant neon signs towering over New York's Times Square -- is a source of national pride. Yet the concentration of power in a small cluster of family businesses is fueling millennial angst.

Coincidentally, "Hunger Games" maker Lionsgate is also breaking ground on Korea's Jeju Island on theme park for "Twilight," its vampire film series. For many young Koreans, the story could be a metaphor for the bloodsucking role the chaebol often play in Asia's fourth-biggest economy. They hoard Korea's economic energy, even as they exude a beguiling and benign exterior.

Moon's predecessor, Park Geun-hye went to jail earlier this year on bribery and influence-peddling charges. It was a shocking plot turn for a president elected in late 2012 to "democratize" the economy by bringing the chaebol to heel. Instead, she shook them down for tens of millions of dollars, a scandal that has Samsung leader Lee Jae-yong in prison awaiting his own trial.

Yet even as Moon stares down the chaebol, a "Hunger Games" dynamic plays out among millennials determined to score a good job. Whether they like chaebol or not, many face heavy family pressure to fight for a chaebol career. The battle for status begins in childhood and intensifies from there. Parents invest in cram schools to hone children's math and English skills to ensure admission into top primary and secondary schools and then Korean universities. A job at a top conglomerate is seen as a necessary stepping stone to success, prestige and stability.

The wide gulf between wages and social status between chaebol and other companies in Korea is unique in the OECD. Even in Japan, where big companies also exude prestige, the gap is much smaller. Working for a household-name company is often seen as vital to marriage prospects. The pressure explains why Koreans are so unhappy. Koreans rank among the lowest of OECD members in basic satisfaction and have some of the highest suicide rates. Trouble is, the chaebol are not growing -- or hiring -- as they used to, making job searches among young Koreans seem more as a brutal contact sport than a rite of passage.

Unemployment in the 15-24 age group is 8.6%. While this is low by the standards of troubled west European economies such as Italy, it is high in comparison with the overall rate of 3.8%. Moreover, many young Koreans stay out of the market altogether -- and out of the unemployment statistics -- the youth employment ratio -- the percentage in work or seeking jobs -- is just 27%, among the lowest in the OECD, where the average is 41%.

Korea must break the cycle. At the moment, the economy is too focused on protecting jobs at the top of the food chain, and not enough about creating new ones from the ground up. Here is where Moon's "trickle-up economics" plan comes in. As Trump's America and Shinzo Abe's Japan cling to trickle-down schemes, Moon favors what he calls "income-led growth." So far, though, he has not articulated a clear strategy.

Moon's recent $390 billion budget will create about 9,500 new central government jobs and raise the minimum wage by 16.4%. It is easy to create public-sector jobs, harder to incentivize private ones. To jumpstart things, Moon should offer tax incentives to entrepreneurs opening shop. He should devise broader safety nets to encourage risk-taking and internationalize education and training programs.

Curbing the chaebol is a vital element of any growth plan. That means expanding anti-monopoly laws, stepping up enforcement capabilities and imposing harsh penalties. Moon's team should clamp down on real-estate speculation that pushes values beyond the orbit of startups, reduce cross-shareholdings between friendly companies and tax excess cash holdings better spent fattening paychecks. It is vital, too, to reduce takeover defenses that limit foreign competition and impose checks and balances on chaebol families passing leadership from generation to generation at the expense of shareholder values. In extreme cases, chaebols could be broken up for the sake of more inclusive growth.

Moon is not the first Korea leader to target the chaebol. Predecessors, though, ended up getting co-opted by Seoul's gamemasters -- Park, most recently. It is high time Korea found a happier ending for its anxious youth, and Moon may be just the leader. Korea's 50 million people are plenty hungry for it.