Haeryun Kang is the creative director of videocusIN, a media incubator in Seoul. Her most recent short film is "Color of Rage: The Nth Room."

You might not know if you were sitting next to an "nth room" criminal on the subway in Seoul, even if he was committing a crime at that very moment. All it would look like is a man typing on his phone, scrolling down, snickering, smiling.

"nth rooms" are chat rooms on the Telegram messaging app where users illegally produce and trade sexually dehumanizing footage of women. Victims, many underage, are often coerced by Telegram users into abusing their bodies. Perpetrators have reportedly turned real-life assaults into online content.

With the trial later this month of Cho Joo-bin, a creator of different Telegram rooms according to the police, South Korea is having to face up to this toxic mixture of tech, sex and crime; to the institutions which failed to stamp it out; and to the national culture of misogyny which enabled it.

The original cluster of chats called "nth room" reportedly sprang up on Telegram in 2018 or early 2019. Now there is a whole network, each with different names like "slave room," "female child room" or "violate your acquaintance room."

Underage girls were degraded, forced to bark like dogs or lie naked on the floor of a public men's toilet. "Let's rape" was a greeting almost as common as "hello." Victims were often duped into giving perpetrators personal details, then blackmailed into obeying the Telegram users' sexual whims.

The exhausting fact is that while the Telegram chats use a new platform, the men's tactics and their dehumanization of women are oppressively familiar. Soranet was a website rife with spycam footage of women and even real-time invitations to rape women. It was shut down in 2016, but similar websites sprang up before and after its closure.

In last year's Burning Sun scandal, K-pop stars were sharing illegally filmed videos of women they had sex with. "You raped her, LOL," said one of their chats.

This might seem abnormal but it fits into a broader pattern of behavior here. It is normal to rate the looks of one's acquaintances, especially women, even to their faces. Young female K-pop idols fulfill older men's Lolita fantasies. Gamers objectify women. Men enjoy spycam as a genre of pornography.

Korean institutions are not catching up to rectify this horrifying norm. Law enforcement is more reactive than preventive, often organizing task forces after a scandal has splashed across the headlines. Cooperating with governments internationally, since many criminal activities take place on foreign servers and platforms, is still a lagging process.

Despite rising public awareness, including the historic women's rallies in 2018 against spycams, Korea's centralized education system has to move further. Its sex education has received backlash for being sexist, typical of a widespread lack of gender sensitivity in schools. Last year an entire school administration, famous for producing K-pop stars, was accused of sexually exploiting its students. 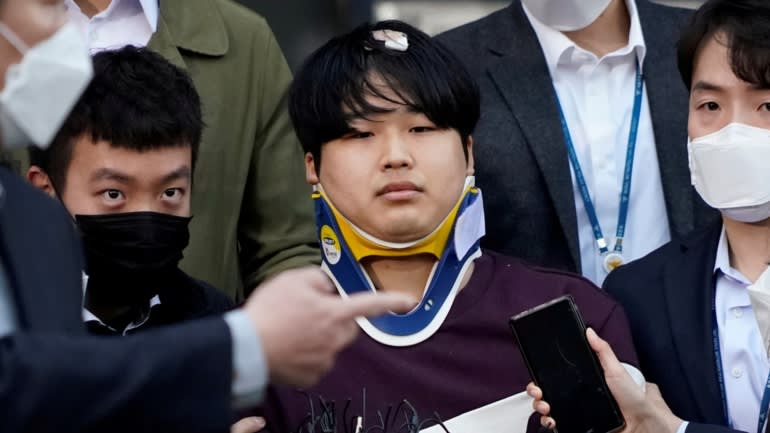 Cho Joo-bin, leader of South Korea's online sexual blackmail ring, walks out of a police station in Seoul on Mar. 25: over 100 suspects have been arrested in the Telegram scandal.   © Reuters

Meanwhile, over 100 suspects have been arrested in the Telegram scandal. The majority of them are young men under 40. The exact scale of these alleged crimes is unknown, but according to the Korea Cyber Sexual Violence Response Center, there were 260,000 users of 56 monitored chats on Telegram.

Penalties for digital sex criminals need to get tougher. It is not enough to look to precedents for sentencing guidelines. Digital sex crimes are unprecedented; they require new definitions, new guidelines. Improvements are coming, slowly, like the 2018 Supreme Court decision to expand the definition of a sex crime to interactions beyond physical, person-to-person assaults.

Over 2 million people have signed a petition to disclose all the Telegram suspects' faces , which law enforcement rarely does, reflecting the desperation to punish alleged perpetrators, at least, through public shaming.

There is palpable concern, especially among women, that the perpetrators will not get what they deserve. This concern seems valid: recently, one of the creators of the original nth rooms was sentenced to 42 months in jail.

But harsher punishments alone will not be enough. Korean society must confront the uncomfortable reality that sexual dehumanization of women is pervasive beyond the nth rooms: in schools, workplaces, politics and the seemingly harmless habits of daily life.

Conversations about feminism must go beyond "these women hate men" or "men are suffering too; feminism is just reverse gender discrimination." Schools need to actively educate students, especially young men, on why gender sensitivity is important.

There is currently only a trickle of voices saying, "We need feminism at school," especially after an elementary school teacher was severely bullied in 2017 for coming out as a feminist.

Without collaborative, comprehensive efforts from different sectors of society, the nth room will happen again. And digital sex offenders will slip back into the crowd, their faces indistinguishable from the rest on the subway.