South Korea's quantitative easing would be road to nowhere

As South Korea's economy slows and politicians dither, investors are buzzing about the obvious next step: quantitative easing -- aggressive purchases of bonds and corporate assets to turbocharge demand by the nation's central bank.

It is obvious because QE has become the default for stuttering economies since the 2008-09 global crisis, and clearly Asia's fourth-biggest economy is in need of a policy pick-me-up. Growth averaged just 1.9% between January and September year-on-year, down from a 2.6% pace in the comparable 2018 period.

These data, though, do not account for the sizable fall since September in exports. The Bank of Korea reckons that overseas shipments for all of 2019 will be down 10.2%, the worst showing since that 2008-09 period. Similarly, President Moon Jae-in is rolling out Seoul's biggest stimulus rescue in a decade.

Yet QE is not the answer for Korea, and central bank Governor Lee Ju-yeol would be wise to resist pressure to go there.

Granted, Lee has been doing just that all year. In October, for example, he said it was premature to resort to such drastic measures. And on November 28, when the BOK board left the benchmark lending rate unchanged at 1.25%, Lee stuck with earlier language that further rate cuts were data dependent.

BOK watchers are well ahead of Lee, including Alex Holmes of Capital Economics, who argues that more easing is "likely" given signs inflation will "remain weak." The average inflation rate over the last year is about 0.6%, roughly the same range as Japan, where QE has been the law of the land on and off for 20 years.

The QE chorus is rising in volume, though, as trade war headwinds bear down on Korea's open, export-heavy economy. One oft-cited reason for QE's growth in support is that only by cutting rates toward zero and loading up on bonds and other assets can the BOK inject sufficient credit into a rigid, aging economy.

Japan is Exhibit A for why a graying consumer base is inherently deflationary. Retirees tend to buy few new flats, cars or appliances. They upgrade mobile devices less regularly than twentysomethings. They do not get bonuses to lavish on travel or department-store splurges. Korea's birthrate, meantime, is less than one baby per woman, putting it on a path for a dubious world record. 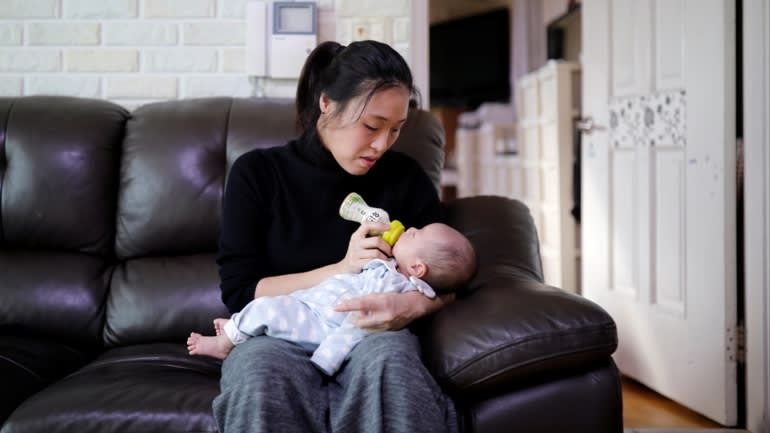 South Korea's birthrate is less than one baby per woman.   © Reuters

Yet as Japan also demonstrates, QE is not enough. In fact, it might do more harm than good over time.

Bankers are sure to agree, particularly those running regional institutions. Since 2013, the Bank of Japan has pushed its ultraloose policy experiments into uncharted territory. In 2016, it went truly radical by adopting negative rates. That made it very difficult for banks to borrow at lower short-term rates and offer longer-term loans at higher ones, which was a reliable source of income.

The bigger problem, though, is how it warps incentives for giant exporters that tower over Asia's trade-driven economies. When you are enjoying vast amounts of corporate welfare courtesy of the central bank, why innovate or take risks on new markets? For two decades now, a succession of governments promised to prod Korea Inc. to become more competitive and less reliant on shipping manufactured goods overseas.

Yet president after president shelved structural reforms when they saw the magnitude of the task, instead leaving economic management to the central bank.

In May 2017, Moon was elected with a "trickle-up growth" mandate to rekindle innovation and boost employment. After some modest steps to raise minimum wages, Moon too deferred to the BOK, and the central bank has largely obliged, with two 25 basis-point cuts this year.

Stepping toward QE would take the onus off Moon's government to act because the central bank is effectively offering politicians a bailout, reducing incentives to take on vested interests. It might feel less urgency to rejigger tax incentives in the direction of startups and away from the chaebols. It might feel less inclined to reduce bureaucracy and scrap barriers to overseas trade and corporate takeover attempts. It might feel less pressure to empower women and shake up an education system that champions rote learning over risk-taking.

The QE debate is happening well beyond Seoul, of course. The Reserve Bank of Australia is standing its ground amid calls for bolder monetary easing as a slowing China buys less iron ore and copper. Ditto for New Zealand, where officials have expressed a willingness to drive rates into "modestly negative territory."

Yet policymakers must strike a balance. While stabilizing growth in the short run, they must avoid becoming ATMs for complacent governments.

Here, it is worth considering the lessons from Paul Volcker, the former Federal Reserve chairman who died December 8 at 92. Volcker defeated double-digit inflation during his 1979-1987 tenure by doing his job, not the government's. For the last 20 years, Asia's monetary authorities did more of the latter than the former -- none more so than Japan's.

This is something for Lee to contemplate should he be tempted to go down a QE rabbit hole -- from which peers have yet to extricate themselves.