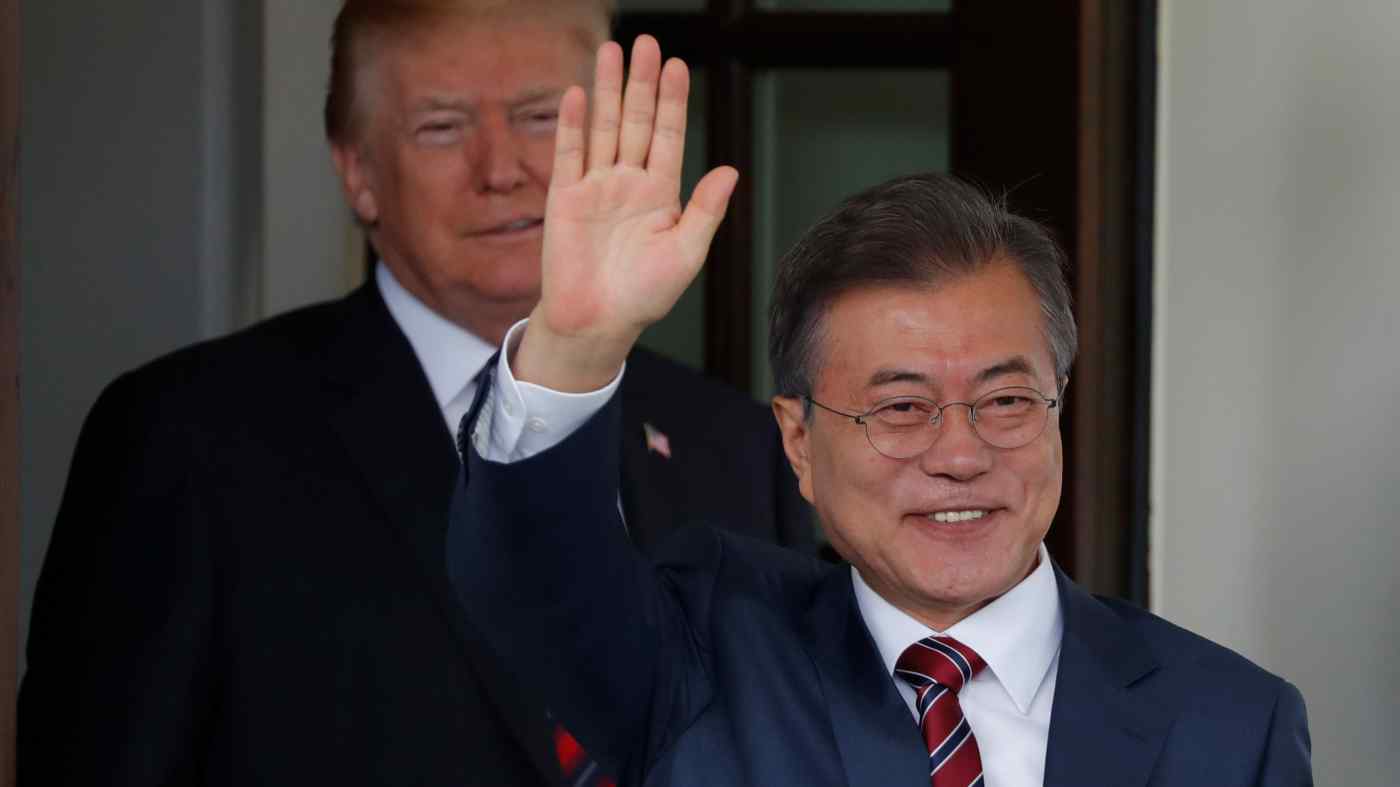 South Korean President Moon Jae-in's headache under U.S. trade policies is an indication of what other countries should prepare for.   © Reuters
CopyCopied

Global investors cannot get enough of Korea these days -- North Korea that is. Where to invest if Kim Jong Un opens his economy, which sectors present the biggest opportunities and risks, how to play reunification.

But more attention should be paid to economic warning signals emanating from the South.

Asia's fourth-biggest economy is as good a weather vane as the global financial system has. South Korea's sizable, open economy often provides early warnings on swings in trade, capital flows and contagion threats. And at the moment, it is flashing red, signaling -- proceed with caution.

As strategist Michael Hartnett of Bank of America Merrill Lynch points out, there is a 25-year-long correlation between South Korean exports and the earnings of listed global companies. Though exports jump around from month to month, a 1.5% contraction in April confirmed worries U.S. President Donald Trump's trade war is hitting his Korean counterpart Moon Jae-in's economy. In May, they recovered sharply, with a 13.5% year-on-year jump. But Hartnett's team is bracing for a soft June number on July 1.

Bank of America Merrill Lynch has been eyeing a robust 15.5% earnings per share globally for 2018. Now, headwinds bearing down on Korea have Hartnett's team targeting 9.4% in 2019, already a downshift from the 10.4% envisioned in April. They even headlined a recent report "Apocalypse Dow."

Last week, Trump threatened to slap a new round of tariffs on China, on imports worth $200 billion. That followed an earlier move to impose tariffs on $50 billion of Chinese goods, and global steel and aluminum duties of 25% and 10%, respectively. The White House is also previewing 25% taxes on car imports.

That goes, too, for Japan's economy, one that recently began contributing to Asian demand with its second-longest post-war expansion. Meanwhile, risks to the U.S., still the world's biggest financial power, are rising fast as China's President Xi Jinping retaliates -- most recently with tariffs on $50 billion worth of American goods tossed Trump's way.

All this highlights Moon's big gamble on Korean Peninsula peace. He took office in May 2017 with a strong public mandate to switch priorities from the giant family-owned conglomerates towering over the nation to smaller enterprises. That shift toward startups and bottom-up jobs growth is key to his "trickle-up economics" program. While Trump and Japan's Shinzo Abe dabble in the trickle-down model of the 1980s, Moon pledged to "democratize" growth and cultivate innovation.

But now he has pivoted to pursuing peace with Kim. A commendable goal, of course. Any success in denuclearizing the most isolated nation would reap economic dividends, lower risk premiums and fuel optimism about listed Korean companies. Yet the Kim dynasty's dismal track record on honoring global agreements collides with an erratic and untrustworthy U.S. leader.

Failure in the peace partnership would rebound on confidence in South Korea, including in its economy, especially if this coincided with further American provocations on the trade front. Moreover, upcoming data on Korean trade and capital flows, may also augur poorly for the economic growth so vital to public support for Trump, Abe and, of course, Xi.

South Korea itself can take a serious punch. After the 1997 Asian crisis, it was the first recipient of an International Monetary Fund bailout to recover. In 2008, Korea confounded short sellers betting it might become the next Iceland. In 2013, its bonds were a safe haven as the U.S. Federal Reserve "taper tantrum" hit emerging markets.

Yet the world has not seen a U.S.-versus-everyone trade war since the early 1930s, long before Moon's nation existed. The fallout could be extreme as retaliatory steps prompt Trump to plot even bigger counterattacks. Soon, Korean central bank leader Lee might regret that quarter-basis-point rate hike in November.

Lee could not have known then how little regard Trump has for key American allies, whether it is Europe, Japan or South Korea. Trump, remember, forced Seoul to renegotiate a free-trade deal in effect since 2012. Korean officials acquiesced, raising quotas for American autos. Now, Trump refuses to sign the new pact, leaving Korea Inc. in limbo.

The same goes for corporate investment and expansion plans for 2019, about which Bank of America Merrill Lynch warns. In South Korea, Japan and other pivotal economies, governments are dueling with anxious executives. The 12 months ahead are a make-or-break moment to get companies earning hefty profits to boost salaries, investments and economic growth rates. Those hopes are running into an escalating trade war driven more by rank nationalism than logic.

For now, healthy demand for memory chips and petrochemical goods are overcoming the Trump effect's impact on South Korean exports. Can it continue? The odds do not favor it.

In fact, economic nihilism is threatening Korea's trade-reliant economy in ways that should worry Wall Street. Punters are free to roll the dice and hope this quarter-century relationship between South Korean exports and global earnings per share no longer holds. More likely though, one of the world's best economic weather vanes is pointing to big trouble ahead.