South Korean voters must reject politics of division in election

Despite new electoral system, parties are playing to their bases 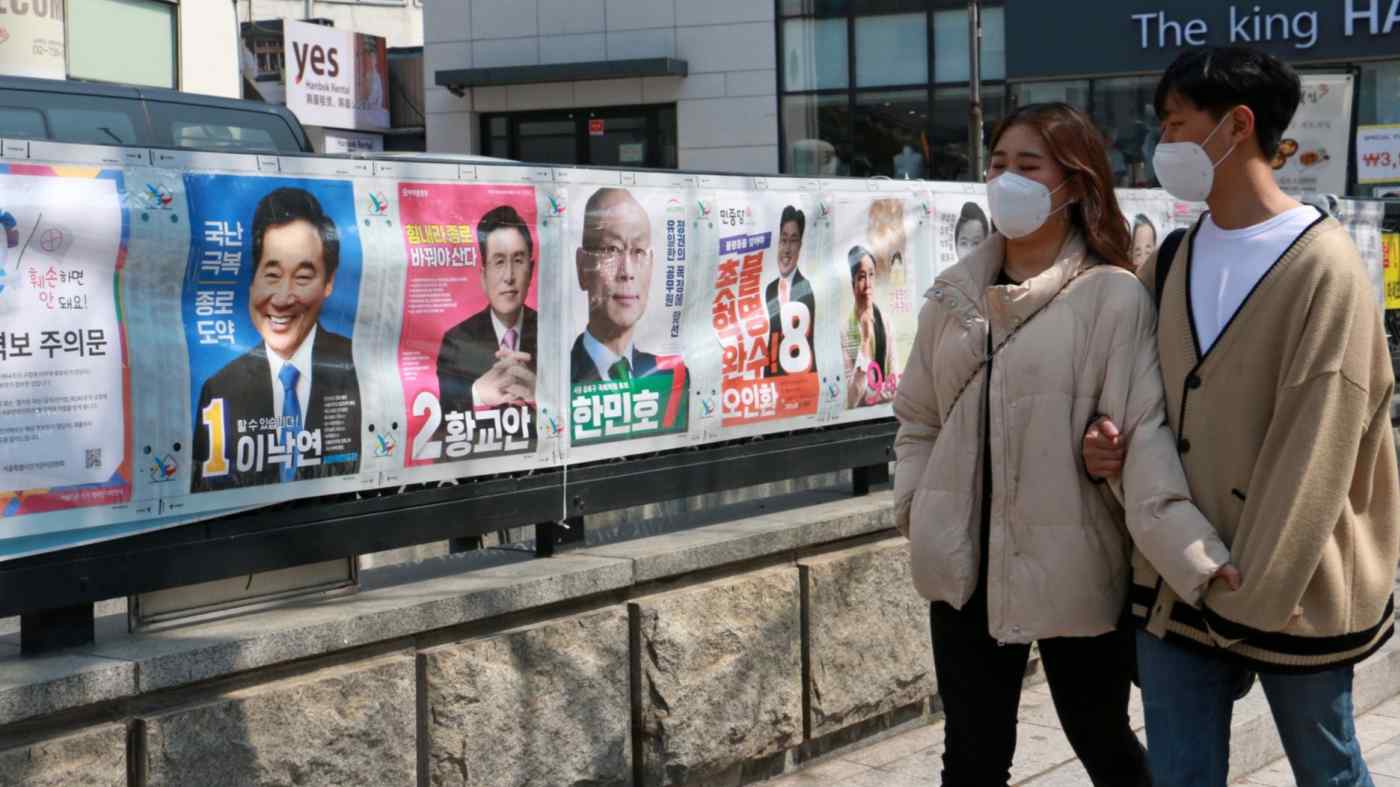 Election posters of candidates in Seoul, pictured on Apr. 3: the parties are sending out messages that only remind voters of the merit of being a member of a political tribe. (Photo by Yosuke Onchi)
CopyCopied

Kwang-Il Yoon is an associate professor of political science and international relations at Sookmyung Women's University.

There are many firsts in South Korea's legislative election being held on April 15. It is the first under a revised electoral system, a mixture of first past the post and party list candidates, and the first with a legal voting age of 18, down from 19.

And, of course, it is the first held during a pandemic, whose unprecedented political and societal implications remain to be seen.

But in reality, the strong dynamics which drive Korean voters remain and parties appear to have given up trying to win over swing voters. This is set to be an entirely tribal election.

There are two strong, long-established dynamics particular to Korea. First, Korean voters have been known to make voting decisions primarily based on where they were born and raised, particularly among the natives of the southwestern Honam and southeastern Yeungnam regions.

They have formed psychological attachments to two main regional parties, voted exclusively for them and largely aligned with them in terms of ideological orientation and policy preferences.

Second and relatedly, Korean politics, especially since democratization in 1987, has been shaped by two regional parties, the ruling Democratic Party of Korea and the conservative United Future Party.

They have successfully mobilized their core constituents, recruited candidates largely from regional strongholds and recently distinguished themselves with ideological positions, particularly on North Korea and welfare policies.

This birthplace-based regionalism among Honam and Youngnam natives reinforced by regional parties has constituted the single most powerful division in contemporary Korean politics. Koreans are known to be ethnically homogenous, but the political divisions and negative emotions driven by regional parties and their loyal supporters are tantamount to what we would expect in ethnically diverse societies.

Crosscutting this are the persistent generation gap -- the young identify as liberal but turn out less, the old as conservative and turn out more -- and voting largely based on perceptions of economic performance of the ruling party, both common in advanced industrial democracies.

In this election, as the last one, most Koreans will choose one of the two parties with regional strongholds.

Nevertheless, there are a couple of hard facts Korean voters have been learning since the beginning of the campaign: you should not let politicians decide the rules of the game, and you should watch out for dog-whistle politics that brings out tribalism.

The new electoral system, with a name as confusing as its rules (semi mixed-member proportional), is a last-minute product of favor-trading between the ruling Democratic Party of Korea and four minor parties. The main conservative opposition refused to get involved so there have been few substantive discussions throughout the law-making process.

This improvised patchwork is confusing and misleading and distorts the electoral environment, which will jeopardize both its efficacy and broader trust in the democratic system.

It would be a tall order even for sophisticated voters to understand how their votes are translated into seats under the new system, and the complex mechanics have prompted the major parties to set up decoy parties to soak up extra seats. This all flies in the face of the intent of the electoral reform intended to boost fair representation, especially of minorities.

Koreans may be relieved to know that this absurd system will not survive after this election but must be reminded that they should not give politicians another chance for electoral reform.

When it comes to dog-whistle politics, voters are getting persuasive messages from all points on the political spectrum, as usual. But in this election, it seems that both major and minor parties have given up attracting swing voters, if there are any. According to the latest Gallup poll, undecided voters are at 22%, whereas they are usually about 40%-50% in polls.

The parties are sending out messages that only reinforce core supporters or remind voters of the merit of being a member of a political tribe: you are not alone. Every issue is politicized and sorted based on which side you vote for, not on the content, and the media only amplifies this.

The result is that even attitudes toward the coronavirus pandemic or the upcoming economic disaster are divided along political orientation. This will definitely aggravate the quality of political discourse and may invalidate voters' judgment of parties' past performance.

Unless voters are able to decode dog-whistle politics, stubborn division will rear its ugly head again. Koreans have seen how regionalism polarizes the nation; they cannot afford to get another form of tribalism.