Southeast Asia must unite to tackle its drug problem

Seizures will not end the trade, no matter how large

A police officer explains about seized illegal drugs during a destruction ceremony  outside Yangon on June 26.   © AP
CopyCopied

Richard Horsey is a Myanmar-based political and conflict analyst, and Jeremy Douglas is the regional representative of the United Nations Office on Drugs and Crime in Southeast Asia and the Pacific.

When the world was coming to terms with the coronavirus pandemic between February and April, Myanmar staged one of the largest anti-drug operations in Asian history.

It came against a backdrop of record seizures across the region. In Myanmar alone, more illicit drugs were seized in the first four months of 2020 than in the whole of 2019, which was itself a record-setting year.

Even for a region accustomed to record-setting seizures, the massive quantities including 18,000 kg of methamphetamine, including more than half a ton of valuable crystal meth, or ice, around 165,000 liters of precursor chemicals needed to produce synthetic drugs, and 35,000 kg of powdered precursors, were remarkable.

The seizure operation took place in an area of Myanmar's Shan state controlled by a well-armed militia, with the drugs destined for markets in the Mekong region, Bangladesh and other parts of Asia. Much of the ice produced in northern Myanmar also ends up in Japan, South Korea, Australia and New Zealand, commanding among the highest prices in the world. 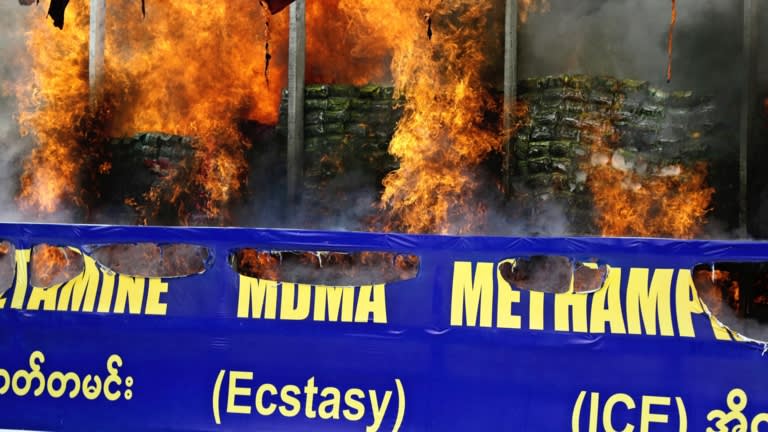 Flames and smoke rise from burning illegal drugs during the destruction ceremony.   © AP

But anyone hoping the success in Kaungkha, as well as the disruptions caused by COVID-19, might slow drug production in the area would be mistaken. Since April, at a time when Myanmar has virtually sealed its borders to prevent COVID-19, drug production appears to be thriving and has quickly shifted to other parts of Shan state.

Instead of containing the drug trade, falling street prices for drugs suggest that all the recent seizures reflect rising production. With a long history in the drug business, Shan state was a leading source of heroin in the 1970s and 1980s. Home to a dozen ethnic insurgent groups and hundreds of militias allied with the Myanmar military, the state's numerous enclaves can be easily hidden from prying eyes, making for ideal locations for the production of synthetic drugs such as methamphetamine.

Apart from its lawlessness, Shan state has several other advantages, including excellent trade and logistics connections with neighboring China, which produces essential precursor chemicals. The state also shares a border with Thailand, a key regional market, and Laos -- a modest market, but good for transshipments. More broadly, Myanmar's Indian Ocean coastline provides easy access to Bangladesh, another big market, and maritime shipment to other more distant markets.

COVID-19 has caused massive disruption to global economies and transportation networks. It is clear there have been many losers from the pandemic, but those who control Asia's illicit drug trade appear to be among the small number of winners. Just as global retail giant Amazon found that it had the perfect pandemic-proof business model, enabling it to exploit its advantage over bricks-and-mortar retailers, the criminal organizations behind Asia's drug trade are consolidating their position.

These organizations operate on a huge scale, with lucrative profit margins and deep cash reserves. And to ensure their operations are resilient in the face of potential seizures and crackdowns, they have built-in redundancies: stockpiles of chemicals, secure lab locations, and use of diverse trafficking routes for chemicals and drugs. Adapting to the pandemic and capitalizing on it, it turns out, was not very difficult after all. Members of the Kaungkha militia stand guard at their headquarters near Loikan, Shan State, pictured in January 2019.   © Reuters

Myanmar cannot tackle this multifaceted problem alone. Although its military and police have taken the unprecedented step of disarming the 3,000-strong Kaungkha militia, breaking up the drug syndicates, which are led by crime bosses based outside Myanmar, is far more difficult.

Progress will depend on enhanced regional cooperation and better intelligence sharing. At the same time, neighboring countries need to accept some responsibility for the trade and take action against organized crime figures in their jurisdictions. They also need to control chemical trafficking across their borders into Myanmar. This requires both interception of controlled substances and action to prevent a wide variety of chemicals being diverted from legitimate industry into illicit drug production.

These steps would go a long way to help curtail the problem. Ultimately, though, the scale of the illicit drug trade is so large, and the consequences so far reaching, that it cannot be addressed with criminal justice tools alone.

Myanmar needs to do more to mitigate the root causes of the problem -- conflict, insecurity, weak governance and corruption. It must have candid political discussions with armed groups that benefit one way or another. But international help for Naypyitaw is essential. The transnational syndicates that dominate the business are wealthy and powerful, with revenues that are larger than the economies of some countries in the region. It is not a fair fight.

The region needs to take up these immense challenges as a political priority that requires more than a reactive law enforcement response. Until that happens, the precursor chemicals that fuel the trade will keep pouring into the mountains of Shan State unabated, and the drugs will keep flowing back out.