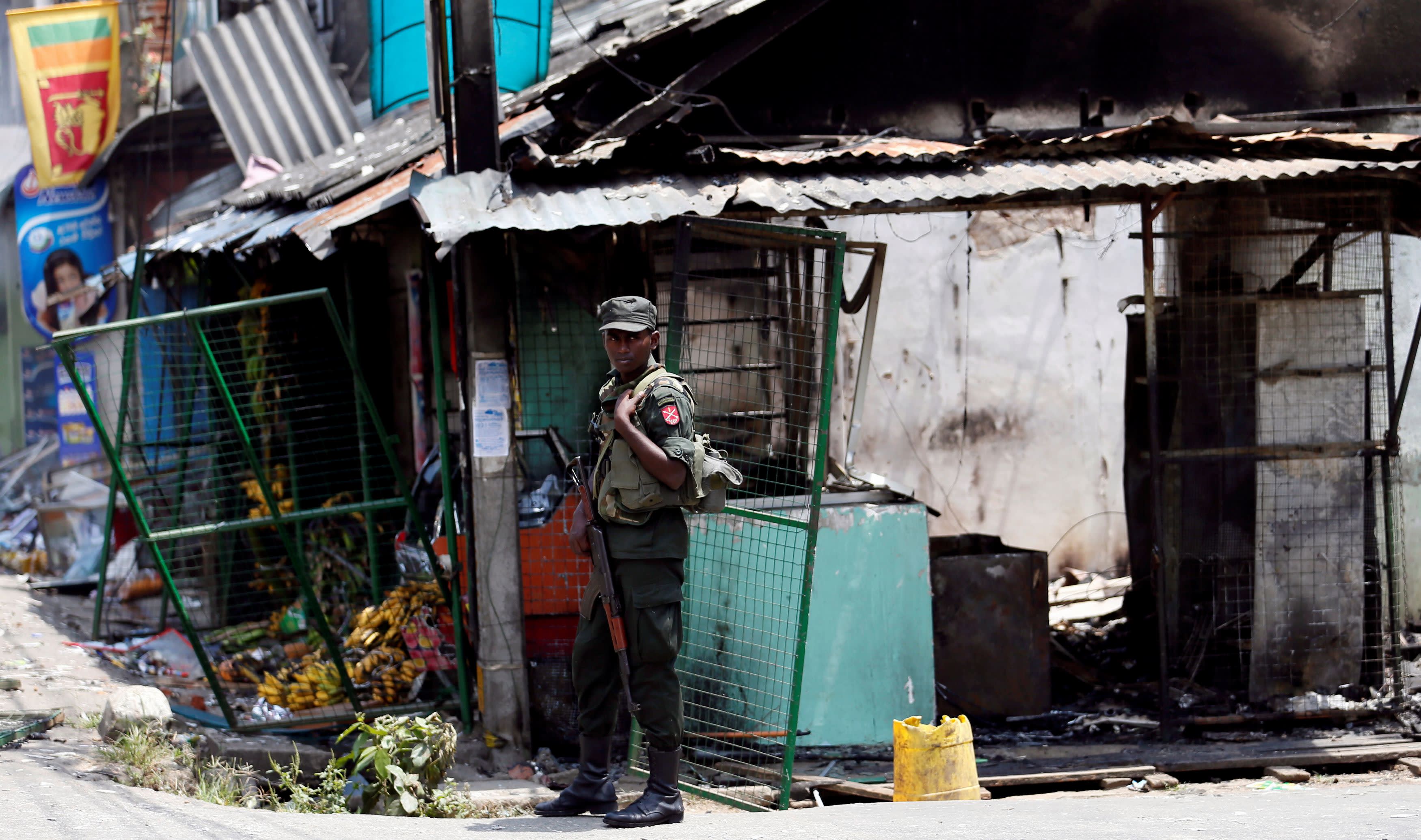 A Sri Lankan army soldier stands guard next to a damaged shop after a clash between two communities in Kandy, Sri Lanka, on March 8.   © Reuters

The Facebook post during the height of recent anti-Muslim violence in Kandy, one of the holiest Buddhist sites in Sri Lanka, was stark and disturbing. "Kill them all, these Muslims," it said in Sinhalese. "Don't even spare an infant. They are dogs."

The scale of the violence conducted by mobs of mainly young men shocked the country even though it had witnessed earlier bouts of Islamophobia against the Muslim minority in this majority-Buddhist land. While the violence was rooted in decades-old local tensions, blame for spreading it focused on the new phenomenon of social media, particularly on Facebook.

In many ways, Facebook has become a convenient scapegoat for the government, which is struggling to keep the conflict between Buddhists and Muslims under control. Like its predecessors, the current administration has done little to address the underlying social problems. President Maithripala Sirisena and Prime Minister Ranil Wickremesinghe join a long list of leaders from whom much was expected, but little was delivered.

Witnesses in Kandy said the violence was fanned by politicians associated with former president Mahinda Rajapaksa who want to exploit communal tensions to regain national leadership. Rajapaksa has denied any involvement by him or his associates.

But, whoever was responsible, it seems clear the riot at Kandy is not an isolated incident and it could happen again.

That is why social media's role in allegedly stoking violence must be examined. The "kill them all" message posted on Facebook was reported to the company by an individual, who then waited six days before receiving a response. Incredibly, Facebook saw nothing wrong with the content and said that it did not violate the company's Community Guidelines, which explicitly prohibit messages that incite hate and violence.

It should not be forgotten that Facebook and other social media have, at times, acted as a force for good in Sri Lanka. In the lead-up to the 2015 presidential election, they provided a platform for those accusing the Rajapaksa government of authoritarianism. Independent media relied on Facebook as a source for reports of corruption, violence and nepotism. Civil society groups used Facebook to coordinate activities.

But since 2015, Facebook has clearly become weaponized by those targeting civil activists, minorities and other vulnerable groups, including women. Such targeting has largely gone unnoticed by the outside world since most of it is conducted in Sinhalese.

This is where Facebook is culpable. Delays of days in responding to complaints are unacceptable. Even worse was the decision that the "Kill them all" message passed muster. Since 2014, we at the Centre for Policy Alternatives, a Colombo-based think tank, have conducted data-driven research on how Facebook is being used by many groups, including sections of the Buddhist clergy, to whip up ethnic and religious hatred.

Until the Kandy violence, Facebook never responded with concrete measures to stem the growth of content that deeply harms Sri Lanka's democratic fabric. As more people use Facebook and other social media, the tenor of the conversations has become more divisive. Those who attempt to promote reconciliation and justice often find themselves subject to attacks. When calls for violence appear on Facebook, the company should address the issue just as the government and civil society have to respond.

Reacting to the violence in Kandy, the government temporarily blocked access to social media, including Facebook, to contain the situation. This hurriedly brought Facebook representatives to Colombo to keep the service in operation. They promised to examine measures to curb hateful content. But in a worrying sign, civil society groups were not invited to participate in these discussions.

Facebook has said that the number of people working to monitor content had doubled globally to 14,000 in the past year and included Sinhala speakers. "In response to the situation in Sri Lanka, we have increased our local language capabilities [and] established communications with government and non-governmental organisations to support efforts to identify and remove such content," it said in a statement.

With global scrutiny of Facebook increasing, the company is being forced to address how its service has been used to promote violence in such countries as Sri Lank and Myanmar. An open letter by 13 Sri Lankan civil society groups to Facebook founder and chief executive Mark Zuckerberg before his recent U.S. congressional testimony prompted an unprecedented formal acknowledgement from Facebook. But its official response glossed over points made by the civil groups, which demand that Facebook put extra effort into monitoring content posted in Sinhalese -- over and above what the company has already done.

What can small countries do? Actually, a lot. The countries that been most affected by the abusive misuse of Facebook, such as Myanmar and Sri Lanka, are among the heaviest users of the service relative to population size. The proportion far exceeds the rate of use in the U.S. Individually, we are small markets. Collectively, we are strong. For Facebook, doing the right thing by us would be doing the right thing globally.

Collaboratively finding solutions to these problems goes to the heart of Zuckerberg's stated intent before the U.S. Congress that Facebook should be used to connect people in the most positive ways possible.

Activists in Sri Lanka are in touch with those from Myanmar, Vietnam, Cambodia and elsewhere to compare notes and ensure that what Facebook promises in one country is also pursued in others facing similar challenges. Sri Lanka is not alone in seeking to hold Facebook accountable. The world is watching.

The recent ethnic violence in Sri Lanka is not the direct result of social media. But Facebook's technology has been used as a megaphone for fringe and institutionalized racism. The company alone cannot solve Sri Lanka's democratic deficit or governance problems. But while the chief responsibility for solving the country's troubles lies with government, Facebook has clear duties to carry out. For too long, we have heard only promises or apologies from Facebook. What we need now is meaningful action. Sanjana Hattotuwa is a senior researcher at the Centre for Policy Alternatives in Colombo.