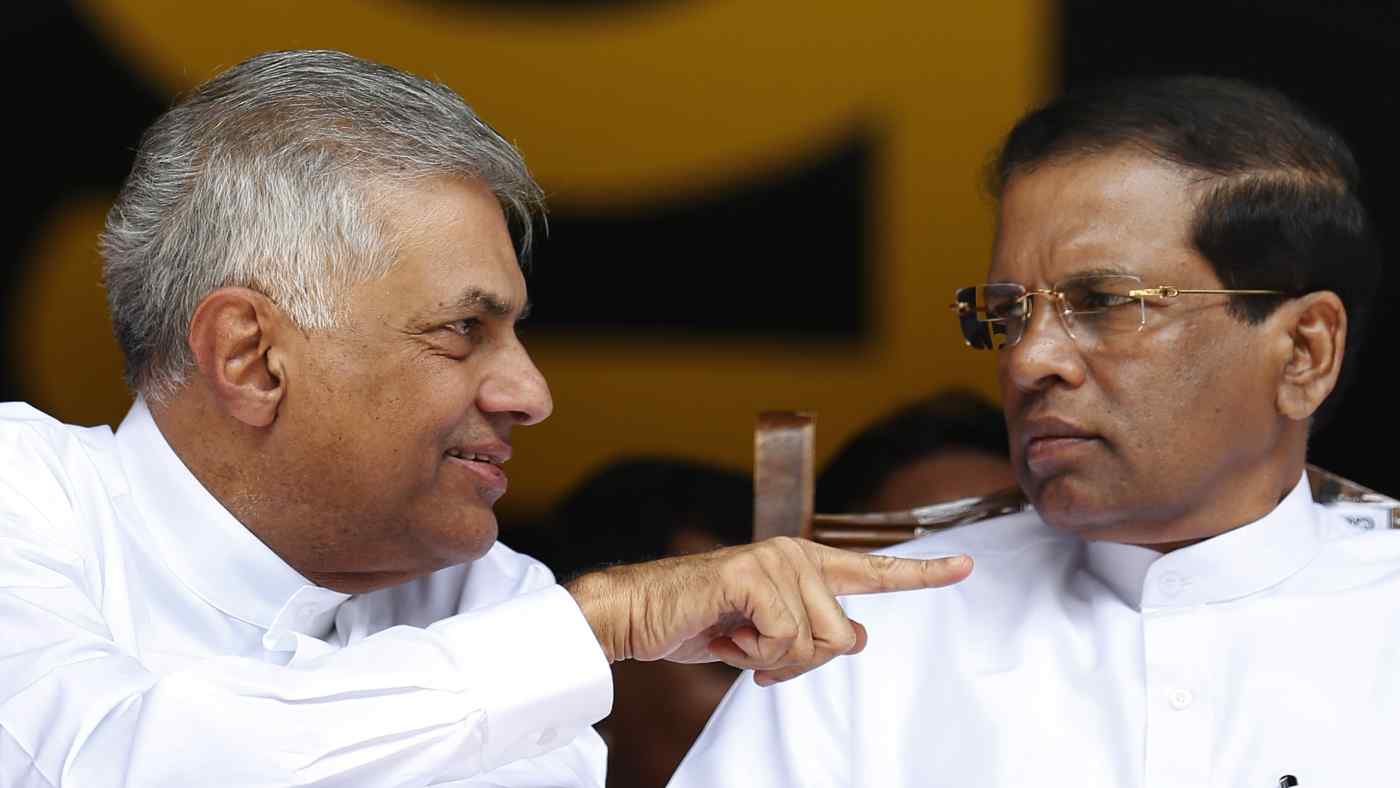 Once allies and now enemies -- President Maithripala Sirisena, right, with Ranil Wickremesinghe, whom he has sought to oust as prime minister   © Reuters
CopyCopied

Democracy worldwide today "finds itself battered and weakened," says the U.S.-based Freedom House think tank. Nowhere is this truer than in Asia, where only a small number of states are genuine democracies.

Political freedom is already losing ground from Bangladesh to Hong Kong. The latest developments in Sri Lanka put the future of one of Asia's oldest democracies at serious risk.

The island's strategic location close to the world's busiest sea lanes has helped intensify international concern over President Maithripala Sirisena's recent unconstitutional actions that smack of the kind of authoritarianism that his predecessor, Mahinda Rajapaksa, had mastered. Sri Lanka's vantage location has made it a "swing state" in the regional tussle for maritime ascendancy between China and democratic allies headed by India, the U.S., Japan and Australia.

Rajapaksa, who ended Sri Lanka's 26-year-old civil war by brutally crushing rebels from the minority Tamil community, led the island-nation with an iron fist for a decade. In a stunning upset in early 2015, the strongman lost the presidential election to Sirisena, a minister in his cabinet who defected before the vote to become the common opposition candidate. Sirisena won in partnership with Ranil Wickremesinghe, who became prime minister.

The duo came to power on the promise of resolving Sri Lanka's crisis of accountability and democratic governance and saving the country from a Chinese debt trap. China, in return for shielding Rajapaksa at the United Nations from allegations of war crimes, had won major infrastructure contracts during his rule and became the leading lender to a country it saw as vital to the completion of President Xi Jinping's Maritime Silk Road.

Sirisena and Wickremesinghe, however, never jelled as partners. Their bickering turned into an open feud this year as Sirisena reneged on his promise not to seek a second term and began undercutting Wickremesinghe, who wanted to be the next president.

In recent days shockingly undemocratic steps have plunged Sri Lanka into political crisis. Sirisena joined forces with Rajapaksa to stage a political coup d'etat: Rajapaksa was hurriedly sworn in at night as prime minister after the president dismissed Wickremesinghe.

A 2015 constitutional amendment had expressly removed the president's power to summarily fire the prime minister.

Amid outrage at home and abroad, Sirisena suspended Parliament to prevent Wickremesinghe -- who has refused to accept his dismissal -- from proving that he commanded a majority. In the meantime, with the United States, India and the European Union mounting pressure for a swift vote in Parliament even as China plowed a lonely furrow in recognizing the new prime minister, Sirisena sought to engineer a majority for Rajapaksa through political horse-trading, with lawmakers reportedly offered bribes to defect to his side.

On November 9, after Sirisena's own party admitted failure to contrive majority support for Rajapaksa, the president dismissed Parliament and called parliamentary elections on January 5, about 20 months ahead of schedule. This action -- which faces a challenge in the Supreme Court -- was unlawful because, under Sri Lanka's constitution, Parliament can be dissolved only when less than six months of its five-year term is left or when two-thirds of the lawmakers assent.

Sirisena's power grab underscores the corrosive legacy of Rajapaksa's family-centered quasi-dictatorship, which was marked by accusations of brazen nepotism, steady expansion of presidential powers, muzzling of civil liberties, and growth of Chinese influence.

The current crisis, however, should not obscure the country's fundamental challenges in relation to ethnic reconciliation, human rights, justice and economic stability.

For example, postwar policies since the 2009 defeat of the Tamil Tiger rebels, far from promoting reconciliation, have engendered dangerous new ethnic and religious divides. The spread of anti-Muslim violence prompted the government in March to declare a state of emergency.

Despite the horrific human cost of the war, Rajapaksa emerged as a hero among the ethnic-Sinhalese majority, who are mainly Buddhist. An emboldened Rajapaksa stepped up efforts to fashion a mono-ethnic identity for a multiethnic Sri Lanka.

Rajapaksa's bid to return to power sends a chilling message to the predominantly Hindu Tamils and to the Muslims, who together make up about a quarter of the country's 22 million population.

Today, thousands of mainly Tamil families are still seeking information about loved ones who were forcibly taken away, pleading for return of land seized by the army or calling for the release of prisoners the government acknowledges it is holding.

Meanwhile, with the country slipping into debt entrapment, Sri Lanka's China dilemma has only deepened. Unable to pay the accumulated Chinese debt, Sri Lanka was forced to hand over its strategically located Hambantota port to China last December under a 99-year lease valued at $1.12 billion. China, thanks to its leverage, has even secured new projects.

In a landmark speech last month that signaled a shift in America's China policy, U.S. Vice President Mike Pence cited Sri Lanka as a victim of Beijing's debt-trap diplomacy and warned that Hambantota could "soon become a forward military base for China's growing blue-water navy."

Today, the choice for Sri Lanka is between shaping its own destiny through political stability and getting sucked into great-power games through internal disarray.

By engineering a national crisis that has resulted in dueling prime ministers, with Rajapaksa pitted against Wickremesinghe, the wily Sirisena has sought to clear the way for another term for himself as president.

Whatever trajectory the present crisis takes, the damage to the country's democratic institutions will not be easy to repair. This is especially so because of the broken promises and retrograde measures.

The president who was elected to prevent abuses and excesses of power again through constitutional change has himself abused the power of his office. In fact, he has reached a Faustian bargain with the man whose 2005-2015 presidency brought democracy under siege.

More fundamentally, Sri Lanka illustrates that free and fair elections, by themselves, do not guarantee genuine democratic empowerment at the grassroots level or adherence to constitutional rules by those in power. In fact, Sri Lanka is a reminder that democratic progress is reversible unless the rule of law is firmly established and the old, entrenched forces are held to account for their rapacious past.

Brahma Chellaney, a geostrategist and author of nine books, is professor of strategic studies at the independent Center for Policy Research in New Delhi and a Fellow at the Robert Bosch Academy in Berlin.