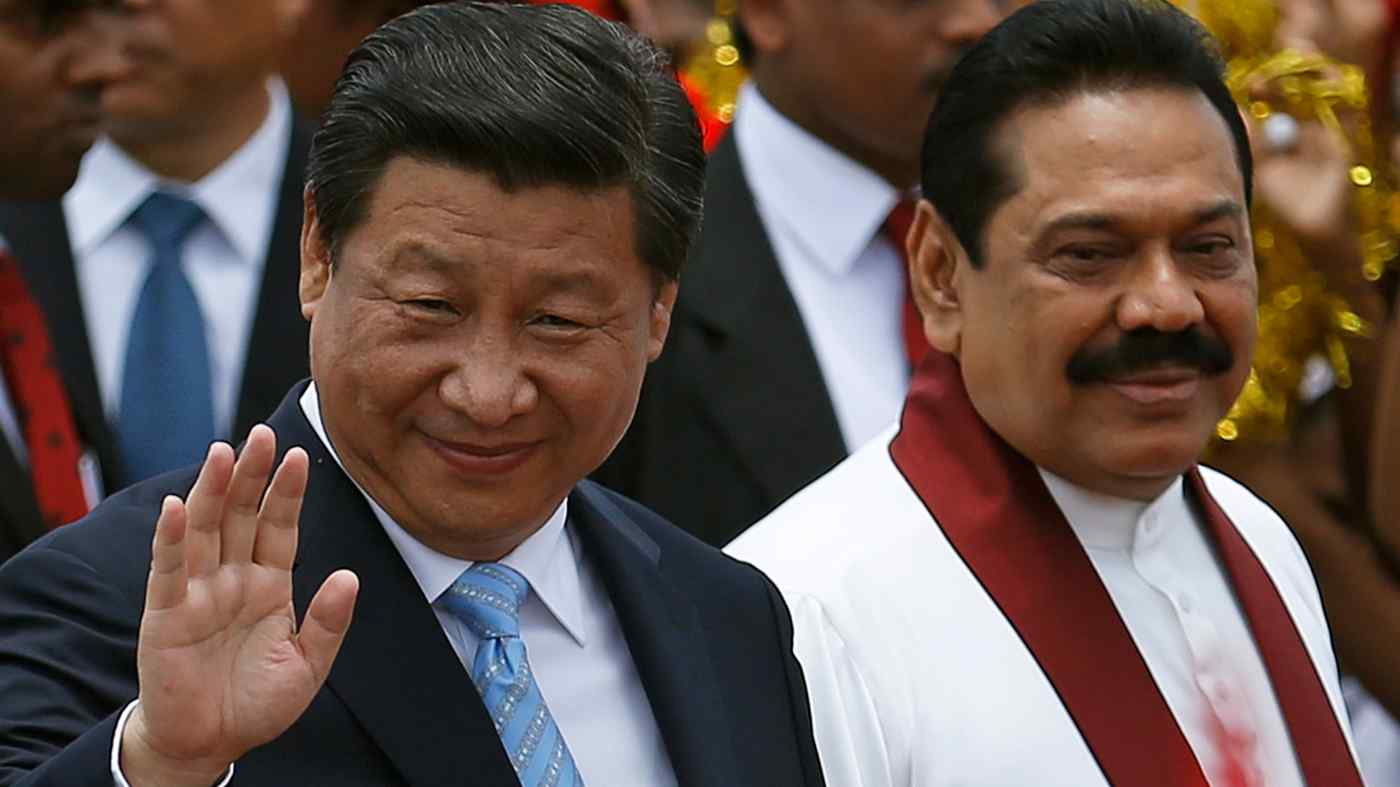 Xi Jinping waves next to Mahinda Rajapaksa, pictured in September 2014: there is a real possibility that Sri Lanka will rely on Chinese loans to avert a macroeconomic crisis.   © Reuters
CopyCopied

Razeen Sally is visiting associate professor at the Lee Kuan Yew School of Public Policy at the National University of Singapore. He is author of "Return to Sri Lanka: Travels in a Paradoxical Island."

Illiberal democracy, a state-led economy, Sinhala-Buddhist supremacy -- Sinhala Buddhists are about 70% of the population, and a China-centric foreign policy were the hallmarks of Mahinda Rajapaksa's rule when he served as president until 2015. His surprise election defeat opened a window for liberal democracy, a more internationally open, private sector-led economy, reconciliation with ethno-religious minorities, and a more balanced foreign policy to reengage with the West and India.

But the coalition government that followed was a total disaster, crippled by no reform strategy, venomous internal warfare, corruption scandals and rank incompetence. The Rajapaksa restoration last November revived the core features of the previous Rajapaksa rule. But now Gotabaya Rajapaksa is in the driving seat, and Sri Lanka faces a COVID-19 plagued world.

With a handful of allies, the SLPP will have a two-thirds parliamentary majority, which will allow it to change the constitution at will. First will come the repeal of the Nineteenth Amendment, which limits presidential powers and strengthens parliament and the judiciary.

Optimists argue that Sri Lanka now has the political stability and decisive governance it lacked under the previous government. President Rajapaksa has centralized power in his small circle, crowded with retired senior military officers. Even more than his brother Mahinda, he favors Big Man rule, exercising untrammeled power, issuing orders and expecting them to be executed without dissent or delay. That has worked, so far, to limit the spread of COVID-19 in Sri Lanka. But will it work to tackle more complex and long-standing problems concerning the economy, interethnic relations, public administration and much else besides?

Countries become stable and prosperous by nurturing effective institutions and social trust over time, not with Big Man politics with its never-ending command-and-control, short-term, ad hoc fixes. That is something the Rajapaksas -- and all but a tiny minority of Sri Lankans -- don't seem to understand. Sri Lanka is now hurtling back to illiberal democracy. It may provide short-term political stability, but I doubt it will lead to better governance.

This Rajapaksa government, like the last one, espouses a collectivist economic ideology. Its first budget was full of tax cuts and expenditure entitlements, guaranteed to increase the fiscal deficit and public debt. Policy consists of diktats and constantly changing regulations on taxes, monetary expansion and import controls.

Sri Lanka was already in a debt trap when this government came to power. Total public debt is about 90% of gross domestic product, and total external debt, at over $50 billion, is about 60% of GDP. Then COVID-19 struck. The budget deficit may go up to 10% of GDP this year, and the economy may shrink by up to 5%. There is no fiscal space for tax cuts and extra public expenditure. The government desperately needs to negotiate debt moratoria, extra loans and possible debt restructuring with the International Monetary Fund and others. But, for now, it has no plan. Mahinda Rajapaksa and his brother Gotabaya Rajapaksa gesture toward each other during the swearing in ceremony at Kelaniya Buddhist temple in Colombo on Aug. 9.   © Reuters

The Rajapaksas are unapologetic Sinhala-Buddhist nationalists. President Rajapaksa and the SLPP were elected with a huge majority of Sinhala votes but only a tiny percentage of ethnic-minority votes.

The Sinhala-Tamil cleavage is long-standing. The Easter Sunday blasts last year, perpetrated by Islamic radicals, opened a new cleavage between Sinhala Buddhists and Christians, on the one hand, and Muslims, on the other. The Rajapaksa Sinhala-Buddhist supremacist agenda is guaranteed to keep ethnic tensions on the boil. Muslims will be most at risk if that gets out of control.

President Rajapaksa has largely ignored the West, the IMF and other international organizations, but he is friendly with Narendra Modi, a fellow strongman and ethno-religious nationalist. China, however, remains "first friend." Money talks: Chinese state-backed investment is the only big game in town. There is a real possibility that Sri Lanka will rely on new Chinese loans to avert a macroeconomic crisis, especially if it does not come to a new agreement with the IMF.

Sri Lanka increasingly resembles a Chinese tributary state -- rather like a brief interlude in the fifteenth century, when Admiral Zheng He abducted a local king and took him to Beijing to pay obeisance to the emperor, after which an annual tribute was sent to China.

Sri Lanka is a bewitchingly beautiful country. Since ancient times, it has won the hearts of many a visitor. I would know, since I grew up there -- I am half Sri Lankan, half British -- and have spent the past decade traveling all over the island to write a travel memoir.

But Sri Lanka is a little country with layer upon layer of complexity and paradox, and a dark side that has benighted its post-independence politics and institutions. As an adviser to the last government, I saw up close its shambolic disintegration. Understandably, Sri Lankans voted for the only realistic alternative: the Rajapaksas. The prospect of another decade of Rajapaksa hegemony does not fill me with optimism.