Taiwan's semiconductor industry is stuck between Trump and Huawei Alex Capri is a visiting senior fellow in the Business School at the National University of Singapore.

Taiwan is caught between Washington and Beijing on a complicated geopolitical matter: the island's status as a hotbed of semiconductor innovation and production.

As part of his campaign to stop Chinese telecom giant Huawei Technologies' fifth-generation, or 5G, technology gaining ground around the world, U.S. President Donald Trump wants to block Taiwan's semiconductor companies from selling microchips to it. More broadly, he wants to frustrate the Chinese Communist Party's ambitions to dominate industries of the future.

He cannot directly stop these businesses, like Taiwan Semiconductor Manufacturing Co. (TSMC), by far the world's largest contract manufacturer of microchips. Instead, he wants to prevent their American suppliers from exporting specialized manufacturing and tooling equipment to them if the Taiwanese companies continue to sell finished microchips to Huawei or any other blacklisted Chinese businesses.

But is a gambit of this magnitude feasible? That depends on three factors: alternative suppliers for Taiwanese companies; a U.S. corporate backlash; and effective political pressure on U.S. allies. It is going to be a difficult, but not necessarily impossible task for Trump.

So are there substitutes for U.S. technology available to TSMC? On paper, yes.

Despite this, in the short term, replacing American technology would be a difficult task for TSMC. Plugging the gaps in what is arguably the world's most complex manufacturing process, where specialized etching and testing equipment has to be fine-tuned and slowly brought online, could take months or even years.

The next complication is whether American companies will lobby to block Washington's plan on the grounds that it would inflict collateral damage on their own global value chains and destroy their market share. In 2019, for example, more than half of TSMC's revenue came from Apple, Qualcomm, Broadcom and other American companies.

This is significant because after TSMC produces these chips, China is the biggest buyer for most U.S. semiconductor companies. Despite a drop from 2018 numbers, more than half of Qualcomm's revenue came from China in 2019; for Broadcom it was about 40%; for Intel, approximately 28%. 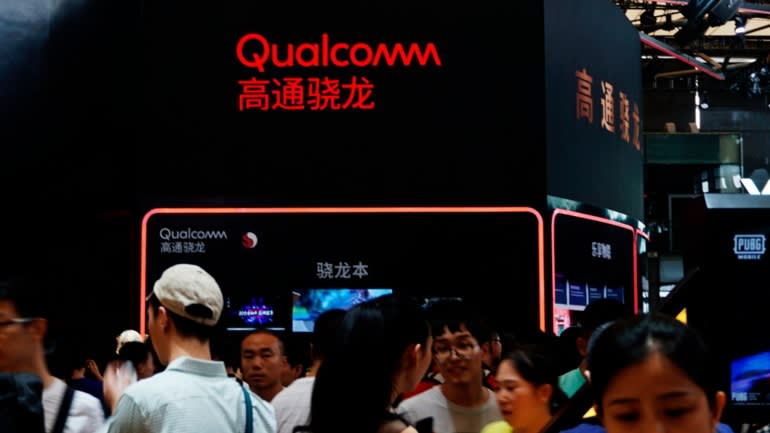 The Qualcomm pavilion at the ChinaJoy digital entertainment show in Shanghai, pictuerd in August 2019: more than half of the company's revenue came from China.   © FeatureChina/AP

As such, lobbying efforts are underway to get the White House to walk back its plans. This approach was successful in 2018, when U.S. industry effectively lobbied its government to lift a technology ban on Chinese telecoms equipment maker ZTE.

The third variable involves diplomacy and how successful Washington is in prodding Japan, South Korea, the Netherlands and other historical allies to acquiesce to its China policies.

Because of U.S. pressure, Dutch authorities are withholding the approval of export licenses for equipment from ASML, which is said to be destined for SMIC, the Chinese semiconductor company.

Given the historic tensions between China and Japan, Tokyo needs its alliance with Washington to remain strong. Thus it is not inconceivable that Shinzo Abe's government would override the wishes of Japanese companies wanting to do business with TSMC, in exchange for Washington's support for Tokyo's wider geopolitical needs.

Washington is applying similar logic to South Korea, where, for example, Moon Jae-in's government might dissuade Samsung from doing a deal with TSMC. Unlike Japan, however, which blocked Huawei 5G technology from its national networks, South Korea has been open to working with Huawei and would likely rebuff the White House.

Finally, there is Taiwan. Washington has been looking to exploit its relationship with Taipei and, among other things, leverage the 1979 Taiwan Relations Act, which allows the U.S. to provide Taiwan with "military arms of a defensive nature."

In 2019, the U.S. sold Taiwan $8 billion worth of military technology, including F-16 jets and advanced radar systems. This arrangement would seem to give the U.S. ample political influence over President Tsai Ing-wen, whose Democratic Progressive Party has an adversarial relationship with Beijing.

Whether or not Tsai would go so far as to prevent, arguably, the country's most important company from supplying chips to Huawei is an open question, given the internal political ramifications this would unleash. And, of course, Beijing would retaliate with economic and other means that would impact many of Taiwan's companies.

All of these variables make the outcome of Washington's latest Huawei gambit very uncertain. What is clear, however, is that Taiwan's semiconductor sector will remain stuck in a geopolitical minefield between China and the U.S. for years to come.

This piece has been updated with a new figure for the share of Intel's revenue which comes from China.