The upheaval-prone Southeast Asian economy earned its nothing-sticks reputation time and again since 2006, when the latest cycle of coups and political intrigue began. The first democratic contest in years aimed to end that cycle. It has not.

The ballots cast March 24 were neither red nor yellow, but they might just as well have been. Often, the "red shirts" loyal to Thaksin Shinawatra, the billionaire prime minister ousted in 2006, and their yellow-shirted opponents face off in the street. This time it was the voting box. But the divides, polarization and confusion remain as the junta that grabbed power in 2014 claims victory.

That disorientation should worry investors used to Thailand beating the odds. The pro-junta forces claim to have won the popular vote, the right to retain power, but not without controversy. Last week, a seven-party 'democratic front' tried to flank Prayuth Chan-ocha's hold on power.

Bottom line, that battle remains a live issue for Thailand's economy, and augurs poorly for the reforms needed to raise competitiveness and avoid the "middle-income trap" nipping at Bangkok's heels.

The Teflon effect has served Thailand investors well. A solid balance of payments position prevented the baht from plunging with regional peers in 2018. Bangkok boasts an enviable store of foreign-exchange reserves, $200 billion, equivalent to about 10 months' imports. Its beaches and nightlife remain a tourism magnet. Thailand's export links with neighbors are reasonably diversified, limiting damage from the trade war.

But the latest five years of junta rule put stability over structural reforms. It was a loss for increasing productivity, strengthening education and training and implementing the mammoth infrastructure investment needed to keep pace with upgrades in Indonesia, the Philippines and Vietnam.

This lost half-decade raises the odds that Thailand's annual per capita income has already stalled below the $7,000 mark. The risk would be less acute had gross domestic product growth averaged more than 3.1% since 2014. That is not nearly fast enough to raise the nation of 70 million to middle-income status, with per head income near $10,000.

The lack of forward motion is turning Thailand's strengths into headwinds. A trade surplus of $4 billion as of February is pushing the baht higher. It has rallied 2% versus the dollar this year. A strong currency can be a plus, but not when it threatens the competitiveness of exports and tourism. 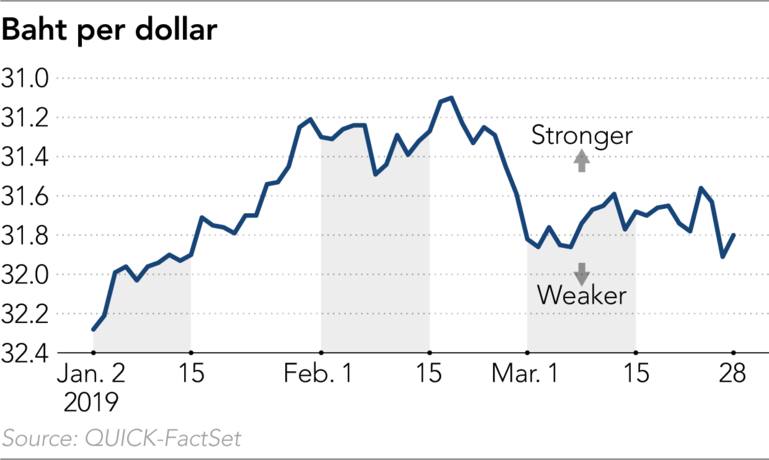 Domestic strains abound, too. Household debt is, officially, an alarming 78% of gross domestic product. Officially, because this figure only reflects money owed to financial institutions. It does not account for a sprawling "gray economy" awash in curb-side lending that often comes with extortionate interest rates. Indonesia's ratio, by comparison, is about 17%. In South Korea, a byword for household debt, it is 100%, but Korea is a much richer and more developed country.

As of August, roughly a quarter of households had trouble making repayments on car loans, credit-card debt and in other areas. This ranks among the most obvious barriers to Thailand raising GDP growth rates to the 5%-6% needed to reach middle-income status. Domestic consumption drives more than 50% of GDP. The more debt households take on, the greater the drag on growth.

Another problem the junta has not addressed: a demographic clock that is speeding up. Last month, the Bank of Thailand warned its "aging society" could be one of the first developing nations with an over-65 population of 14% or more by 2022.

The remedies to these challenges were well understood in Thaksin's day from 2001 to 2006, never mind in 2014. They include: increased government transparency and less bureaucracy; greater focus on education and health care; faster plans to upgrade roads, ports and power grids; redoubling efforts to support rural areas, not just Bangkok.

The pro-Thaksin camp argues that their prime minister got this last focus right. But Thaksin's policy of doling out cash around the nation came with an awkward string attached: vote for me. Little about that largesse encouraged municipal leaders to invest in human capital or infrastructure, or attract more investment. Sugar highs may win elections, but they do zero to buttress Thailand's competitiveness.

Then the elections stopped. But not the populist cash-handout scheme. Wedged between Thaksin's ouster in 2006 and Prayuth grabbing power in 2014 were eight other prime ministers, including Thaksin's sister. Each talked grandly about political resets and economic revivals. Yet when the going got tough, each resorted to Thaksin-like populism.

That goes, too, for Prayuth. Along with hiring the architect of "Thaksinomics," Somkid Jatusripitak, as adviser, Prayuth generally passed out more goodies than clear policy blueprints.

Where to next? Indications are that the pro-junta Palang Pracharath party won the popular vote. The outcome may never placate Thaksin's red-shirt masses. From the beginning, the deck was stacked firmly in the junta's favor. The generals needed to win just 25% of elected seats. And a new constitution allows the junta to influence the appointment of all 250 members of the Senate. Call it "democracy," Thai-style.

That said, Thailand cannot afford another five years of complacency. An immediate way to regain reformist momentum is accelerating efforts to implement a $54 billion transport corridor project along the Eastern Seaboard. Prayuth has long championed its promise, but failed to turn hype into reality.

That would help nudge Thai investment spending higher than 24% of GDP, a level lagging the 29% Southeast Asian average. For too long now, Thailand has taken its "Detroit of Asia" status for granted. Toyota, Ford and BMW have a growing number of other options for factories in the region. Those jobs are Thailand's to lose.

The next government also must get serious about shaking up the education and health care systems. This two-pronged assault on poverty would reap greater dividends than cash handouts. It also is vital to raising productivity and per capita income above $6,600 in nominal terms. By comparison, China's is $8,700.

The household debt challenge can be addressed with stricter terms for mortgages and auto loans. In December, the central bank took a step to curb borrowing by hiking the benchmark rate to 1.75% from 1.5%. It was Bank of Thailand first tightening move since 2011.

Thailand's successive governments have long known how to take the economy to a new level, but have been bad at implementation. Once the dust settles from March 24, Bangkok must ensure squabbling does not get in the way of progress -- and implement upgrades that stick. If not, Thailand's next 10 years may be even more disturbed than the last.