Country is emerging with a renewed sense of self-confidence Crowds of visitors head towards the Sensoji Temple in Asakusa on Jan. 2: Japan will continue with its cautious-but-soft pandemic management.   © Sipa/AP
CopyCopied

Melanie Brock is a specialist in Japan-APAC relations. She has her own consultancy and is a senior adviser at Finsbury Glover Hering.

My sense is that many on distant shores look at Japan either through a "Blade Runner" lens or see it as simply a destination for excellent skiing. Both are entirely acceptable, of course, but potential investors, companies with Japanese colleagues and those looking to collaborate with Japan Inc. need to probe deeper.

Among many underreported facts about Japan is that it has weathered COVID-19 remarkably well, at least so far. And as we emerge, fingers crossed, from this pandemic, I would like to offer 10 trends to watch in a country that I believe is emerging with a renewed sense of self-confidence and that may even have some lessons for the rest of the world.

Japan will continue with its cautious-but-soft pandemic management. While imposing drastic border controls that have closed the country to all tourists and pretty much every other type of visitor, the government has avoided hard lockdowns domestically relying on people's innate sense of responsibility. This has worked a treat, with high levels of social distancing, mask-wearing and adherence to safety protocols but without the politicization and bitter divisions seen in many Western countries.

After a slow start, the vaccination rollout has gone smoothly, with almost 80% of the population double-jabbed -- the highest rate among Group of Seven countries -- few fatalities and plenty of available hospital beds. Clearly, this approach has been easier to implement in a country with high levels of social cohesion. Appealing to their citizens' better nature rather than trying to force compliance has paid off. Like elsewhere, the omicron variant will test the government's pandemic measures but here is hoping there is a strong plan ready to be rolled out.

By keeping much of the country running, the economy has undoubtedly suffered less than it otherwise would have and, after expected gross domestic product growth of 2.6% in fiscal 2021, it is set to expand by 3.2% this coming year, its fastest growth in a decade. This economic recovery is also being underpinned by a series of record economic stimulus packages, with the latest 55.7 trillion yen ($490 billion) effort being passed by the government of new Prime Minister Fumio Kishida in December. 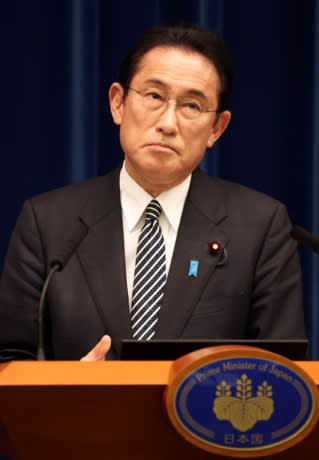 Fumio Kishida is well aware that the cyclical bounce will fade while Japan's demographic drag and high debts remain.   © Reuters

Kishida is well aware that this cyclical bounce will fade while Japan's demographic drag and high debts remain. He is therefore trying to pull two other policy levers that we will hear more about this year. The first, which is being labeled "new capitalism," is a degree of income redistribution, for example, giving tax breaks to companies that raise wages in order to trigger more middle-class consumer spending.

Consumer spending, which accounts for almost half of Japan's GDP, decreased 1.3% to 285 billion yen in the third quarter of 2021 from 288 billion yen in the second quarter. The economy needs to reverse this trend. Business leaders know that consumer spending is a key trigger for recovery but consumers will need to be enticed out of their save for the next rainy day mentality.

The second is targeted reform in the areas of digital transformation, where Japan has been sadly lagging its Asian rivals, particularly China and South Korea; and in what is being called green transformation, the embrace of decarbonization and clean energy following Japan's adoption of a 2050 net-zero greenhouse emissions target. Science and innovation funding is being increased, as is the support for Japan's Green Growth Strategy with a focus on 14 areas, including offshore wind, green hydrogen and batteries.

That is already changing under the steadily increasing pressure of environmental, social and governance, or ESG, focused investing and reform efforts begun by former premier Shinzo Abe. Companies are being pushed into declaring their own net-zero targets. From this year, they will be required to report against revised corporate governance code requirements. And the term "gender diversity" has been earmarked in a list of 10 areas of change needed in Japan. While the number of women on boards and senior management is significantly lower than in the West, corporate Japan is making concerted efforts to catch up.

On top of those secular pressures, Japanese companies in 2022 will have to cope with shorter-term challenges caused by the pandemic. Two are worth picking out. First, changing work practices, which range from re-purposing office space to solving labor shortages while dealing with official demands to increase wages across the board.

The second, which is top of mind for many CEOs at present, is rethinking supply chains, including whether to create more redundancy or even re-shore production despite the costs. Kishida's call for a 1.4 trillion yen public-private fund to support the domestic semiconductor industry and news that Taiwan Semiconductor Manufacturing Co. (TSMC) will establish a $7 billion plant in Japan shows both the urgency and the capital at stake.

Increasingly, the only way for companies to deal with all of these challenges is, in fact, some form of M&A activity, which has already recovered from its 2020 dip and should increase further this year. Data for 2021 shows a 14.7% increase over the previous year. The global boom in mergers is also a factor here, given the growing number of cross-border deals and the steady influx of international private equity funds.

Finally, Japanese foreign policy will continue to evolve and perhaps become a touch more assertive amid geopolitical pressures, trade tensions and a series of elections across Asia. Pragmatic and flexible engagement will remain the preferred approach in an area that is always good for a surprise and, therefore, the final item on my list of things to watch this year.