As the U.S. and China engage in a trade conflict and COVID-19 sharply depresses economic growth, Thailand should be coveting a regional trade agreement like the Comprehensive and Progressive Agreement for Trans-Pacific Partnership. It would be a reasonable lifeline to freer trade and investment for economic expansion.

But Thailand's trade policy and strategy have long been politicized and resisted by a committed column of civil society groups and nongovernment organizations. Their mistrust of free trade agreements dates to the early 2000s when the Thaksin Shinawatra government used its parliamentary majority to ram through a clutch of FTAs with little public participation.

Now this fate has befallen CPTPP and the public's distrust of the agreement threatens to stop Thailand reaping its rewards. It is instructive as a cautionary tale of what happens when state and society do not trust each other and politicians disregard public participation.

CPTPP, which the U.S. abandoned after President Donald Trump took office in 2017, comprises 11 members -- Canada, Mexico, Peru and Chile on the Americas side of the Pacific and Australia, New Zealand, Japan, Brunei, Malaysia, Singapore and Vietnam at the other end.

Based on a feasibility study, Deputy Prime Minister Somkid Jatusripitak claimed that joining the agreement would boost Thailand's annual gross domestic product by 0.12% or 13.3 billion baht ($430 million), while not participating would result in a fall of 26.6 billion baht or a contraction in GDP of 0.25% per year. The Thai government recently approved the establishment of a committee to discuss joining CPTPP.

Critics may be right in pointing out that these amounts are minuscule, compared to potential negative impacts on farmers and the general public. They raise concerns that CPTPP could lead to stronger enforcement of intellectual property rights that would inevitably favor multinational companies in the agricultural and pharmaceutical industries over local farmers and smaller domestic companies. 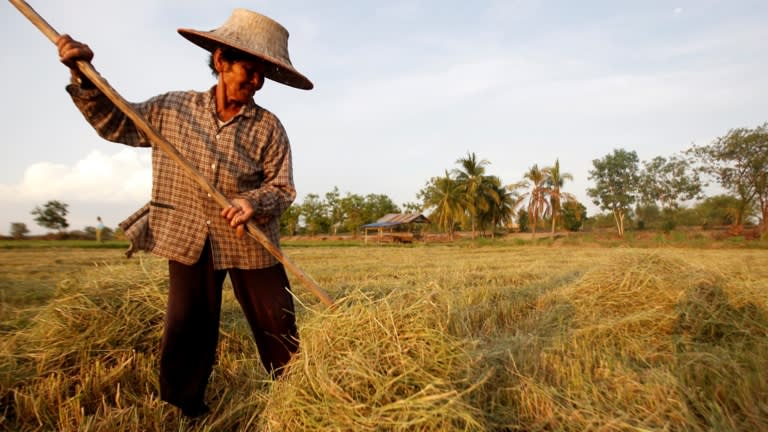 Critics raise concerns that CPTPP could lead to enforcement of intellectual property rights that would favor multinational companies over local farmers.   © LightRocket/Getty Images

Opponents also stress that CPTPP's potential to expand export markets may be limited as all members but Canada and Mexico already have bilateral free trade agreements with Thailand.

While these are significant issues that deserve thorough public debates, what should also be considered is that CPTPP is an economic integration scheme whose goals extend beyond the conventional removal of trade barriers. It is a broader region-based agreement that could spur much-needed reforms at home in areas that would make the Thai economic environment more open and transparent.

Covering 30 chapters, CPTPP would establish common regulatory and institutional frameworks on a range of issues, from intellectual property rights, services and competition policy to environment and labor standards.

These are issues that have long hindered Thailand's competitiveness in attracting higher value-added and more sophisticated trade and investment flows. Despite strong investment inflows into Southeast Asia, Thailand is no longer the region's top foreign direct investment destination and consistently trailed Singapore, Indonesia, Vietnam and Malaysia in 2014-2019.

Thanks to its proximity to China and its growing middle class, Southeast Asia stands to benefit as a region that could accommodate multinational companies that want to reduce their dependency on China yet stay in the area to develop alternative regional value chains.

Governments' economic integration policies in the post-COVID era therefore need to take these shifts into consideration. Trade talks can no longer be restricted only to penetrating others' markets while keeping one's own closed to reap the most from export revenues.

Rather, the trade negotiation agenda has been focused more on creating common legal and regulatory frameworks that would bring more transparency and reduce risks through common practices and standards, much like CPTPP aims to do. This is why a balanced and thorough public debate and consultation process on CPTPP membership are sorely needed to create consensus among different stakeholders in Thai society.

Thaksin was overthrown in a military coup in 2006 partly because of FTA-driven civil society opposition. Accordingly, the current Thai government of Prime Minister Prayut Chan-ocha needs more time and measures to promote consultative processes toward a trade policy consensus. Rushing the CPTPP membership as a cabinet resolution in the middle of pandemic-induced economic hardship has inevitably boomeranged.

What Thailand needs to get out of this trade policy cul-de-sac is the genuine and transparent cultivation of public participation and state-society trust. This requires serious homework based on more independent studies and debates, where different groups of stakeholders are consulted before final decisions are reached.

While a timetable for applying to CPTPP should not be forced on the public, opposition from NGOs must also not hold Thai trade policy hostage. Thailand should consider all routes to freer trade, not only for market expansion but more crucially for domestic reforms that will upgrade the country's productivity and competitiveness as globalization changes and becomes more challenging in the post-virus era.