Thai protesters must force reform, not a revolution

Compromise the only way to create a genuine constitutional monarchy Pro-democracy protesters gathered at Democracy Monument in Bangkok on Aug. 16: they want to reset the rules and create a genuine constitutional monarchy.   © NurPhoto/Getty Images
CopyCopied

Thitinan Pongsudhirak is professor and director of the Institute of Security and International Studies at Chulalongkorn University's Faculty of Political Science in Bangkok.

The first 20 years of the new century have been anything but harmonious for Thailand, spawning prolonged violent confrontations between street protesters and the military, two military coups, and two new constitutions.

Ahead of mass demonstrations planned in the capital Bangkok this weekend, Thailand has arrived at a new juncture, and while it is similar to other periods of unrest, it is likely to prove profoundly different.

At its core, this remains a battle over who gets to rule Thailand, and how. This time, the yellow shirt forces revolving around the military, monarchy, judiciary, bureaucracy, and columns no longer face the red shirt political machinery loyal to ousted Prime Minister Thaksin Shinawatra with its base in the country's rural heartland.

Instead, a broad-based and organic youth movement on myriad high school and university campuses across the country are challenging the established centers of power to reform and modernize.

There were Thaksin's proxy parties that won elections in 2005, 2007, and 2011. They were forced out first by a military coup in 2006, judicial intervention in 2008, and the last coup in May 2014. While the yellow shirts paved the way for these military and judicial interventions, the red shirts were suppressed in 2009-10 after demanding popular representation through their preferred political parties.

Democracy was subverted because it contrasted starkly with the unelected moral authority of the late King Bhumibol Adulyadej who reigned for 70 years from 1946 with immense popularity and public respect. As long as Thailand's political party system remained fractious and weak during the late monarch's reign, his moral authority played a decisive role as the final arbiter in times of crisis. What we are understanding now is that such moral authority is specific to him. Under the new King Maha Vajiralongkorn, long-held assumptions about how Thailand works no longer hold.

As Thailand's fault line shifts from colors to demographics, young protesters predominantly between the age of 15 and 25 are clamoring for a revamped constitution that weakens the power of the monarchy. The protesters are also demanding that the authorities stop harassing and using the law to persecute them for speaking truth to power.

Ultimately, they want to reset the rules and create a genuine constitutional monarchy where the royal family is as accountable and transparent as royal households elsewhere, such as in Japan and the United Kingdom.

Had he delivered a promising and viable future for Thailand after seizing power in the May 2014 coup, Prime Minister Prayuth Chan-ocha might have been able to appease and accommodate the youth movement. But instead of charting a decent way ahead in the globally competitive 2020s, Prayuth's military-backed regime, both before and after the March 2019 poll, has led Thailand into a cul-de-sac of long-term economic stagnation and political repression. 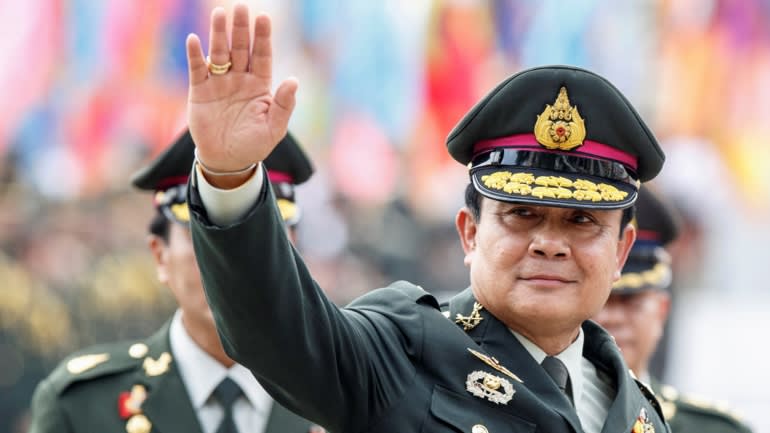 Younger Thais want reform and change because Thailand's political system, which suited it for the last half of the 20th century, is now outdated. The Thai economy remains indefinitely mired in the middle-income trap, unable to climb up the value chains, with no big technology names to its credit. Yet despite rising public debt and ongoing economic mismanagement, the military-manipulated constitution of 2017 guarantees the current enfeebled parliamentary system where the prime minister is effectively chosen by the military.

The students' demands actually amount to an overdue reckoning and reconciliation for Thailand under the reign of the new king. In the past, Thailand's democracy and monarchy existed in a kind of inverse relationship that prevented both from being strong at the same time. In the now distant past, a strong monarchy coupled with military dominance helped to thwart communist expansionism, providing stability, unity and economic growth.

Now, what those people born during and after the 1990s want is a constitutionalized monarchy, with democratic institutions that can represent them instead of the king and the military. They want to reclaim a future squandered by squabbling old adults over the past two decades.

Thailand's ongoing confrontations are likely to unfold in one of two ways.

As a series of showdowns loom between younger voices and conservative forces, the status quo appears untenable, especially with the traditional backstops that existed under the late monarch no longer available. The coronavirus pandemic has also pounded an already weak economy into its worst contraction on record, widening dissent and discontent.

At issue is whether a compromise can emerge from the thickening dust of conflict. Military coups, more than parliamentary solutions, determined the outcome of past conflict. This time, another putsch under a new king may not succeed in clearing the slate for a reset. Thailand is facing an uncharted and precarious frontier. Navigating out of this quagmire requires mutual respect and understanding.

If they are to succeed, the youth movement will need to broaden its appeal to other segments of society including older demographics, and press for concessions and reforms of traditional institutions rather than upending them.

Notwithstanding its lip service and foot-dragging on a constitutional overhaul, the Prayuth-led regime and the incumbent institutions of the old order must realize that concessions and compromises will be the only way they can ensure that some of their privileges and prerogatives will be maintained.